The whole Pokemon craze hit North America in 1999. I was 14 at the time, and being a Pokemon fan in high school was the social equivalent of certain death. My brother was 3 years younger than me though, and at 11 years old he was at the heart of the Pokemon target audience. He loved the GameBoy games, the trading card game, and of course, the cartoon.

Everything I knew about Pokemon was through his lens, which was mostly that cartoon, and those first 150 Pokemon. A large number of Pokemon clones started popping up, and the two most prominent, in our household, were Digimon and Monster Rancher, mainly because they both had pretty good cartoon series. Because I didn’t discover the Shin Megami Tensei series until Nocturne for the PS2 in 2003 (which actually pre-dates Pokemon by almost a decade in Japan), the two best monster catching videogames available were the unappreciated Jade Cocoon, and Monster Rancher, both for the original PlayStation. I don’t even remember playing a Digimon videogame. Again, playing Pokemon on a GameBoy, in my high school hallway, was a shameful act, but playing Jade Cocoon at home was just fine.

Monster Rancher had one of the best monster-catching cartoons on TV, and it had one of the best monster-catching games on a home console. And that game had something very unique going for it: monsters weren’t adventured for and captured, rather they were generated by CDs. Compact discs, for you younger readers (who probably aren’t reading this, because you likely only want video content), were the plastic coaster-like storage units we used to listen to music albums in the 1990s. Somehow, Tecmo, who developed Monster Rancher, found a way to use the individual data on, seriously, every single individual CD to generate a different monster.

I love the mystique of Monster Rancher 1 & 2 DX’s monster-generating system, so I haven’t looked up how many hundreds of monsters were in the original game, but there were thousands and thousands of CD music albums, so some CDs would inevitably contain the same monsters. There were some albums (15 or so if my memory doesn’t fail me) that had rare monsters on them. I guess this info was published in some magazines or something (the internet was not nearly as useful in 1999), and my friend Brian, who owned a copy of the original Monster Rancher, found out that I owned a copy of the Spawn movie soundtrack. He was overjoyed and borrowed it from me immediately and got himself some kind of evil squirrel. 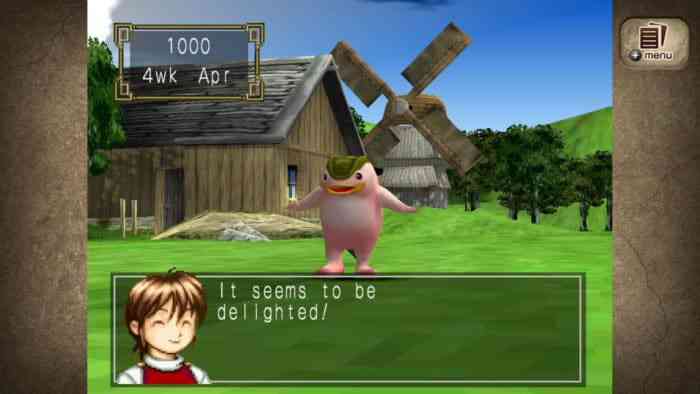 In 2021, 25 years after the release of the original game, Monster Rancher (and Monster Rancher 2) are being released onto Switch and PC as Monster Rancher 1 & 2 DX. I will tell you what this game is like, for those who don’t already know, and comment on how it has aged. But the real question I am going to answer in this article is: how did Koei Tecmo make this CD-based monster generating system work in a time where Switches and laptops don’t even have disc drives anymore!?

There isn’t much of a narrative in the game. You are a rancher, who lives in a world where people dig up stones that can be exchanged for the monsters inside of them at temples. The goal of monster ranchers is to raise their monsters to fight in tournaments, and earn money. 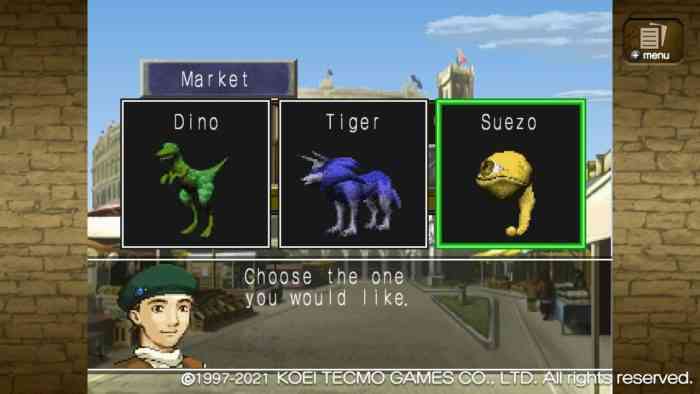 Gameplay consists of generating monsters (more on that soon), raising those monsters, and battling them. Raising monsters is a juggle of work and rest. You need to feed them, give them different jobs and training, which raise and lower different stats, then have your monster battle others in tournaments. Tournament participation money is used to buy food, and better training. Rinse and repeat. It’s a fairly simple process, but one that should be fun for those who like relaxing farm sims, or are driven by stat gains.

Battle is turn-based JRPG-style combat, where meters for hit percentage and will power need to be juggled. Timing attacks to a changing hit percentage is key to success. If your monster loses the will to fight by acting too hastily, it becomes confused instead of executing commands. But really, at the end of the day, if your monster’s stats are slightly higher than your opponent’s, it’s going to win with little strategy. The fun of the game isn’t in the combat, so much as the stat gain that allows the player to compete in higher ranked tournaments.

Generic monsters can be chosen from an in-game market, but the real fun of playing Monster Rancher 1 & 2 DX is in generating monsters at the Shrine. Monster Rancher 1 & 2 DX features an in-game database of probably 90% of all music albums ever. There are search bars for artist and album. The player must actually enter band names and choose an album, and that combo generates a monster! The monster I used in my initial playthrough of the original Monster Rancher was a brown jelly generated from choosing the album Clayman by In Flames. I was very impressed that enough care went into monster assignments that my “Clayman” monster looked like a clay man. There were a few albums I tried that weren’t there, however. The database does have a disclaimer that CDs will not necessarily have the same monsters as in the original game, which made sense when I couldn’t find the Spawn soundtrack. There were two other albums I tried that I couldn’t find: one was Madonna’s Ray of Light (because it made a fairly powerful rainbow golem back in the day), and the other was AFI’s Sing the Sorrow (because I love it), although all of their other albums were in the database.

Monster Rancher 2 is very similar to Monster Rancher, but it starts with an Ogre Battle-style quiz that determines your training style. The only other major difference is that there’s a greater diversity of monsters, as well as detail in their visuals. Its inclusion is a treat for European fans of the franchise, because they didn’t get the original Monster Rancher, and Monster Rancher 2 was labelled as such. 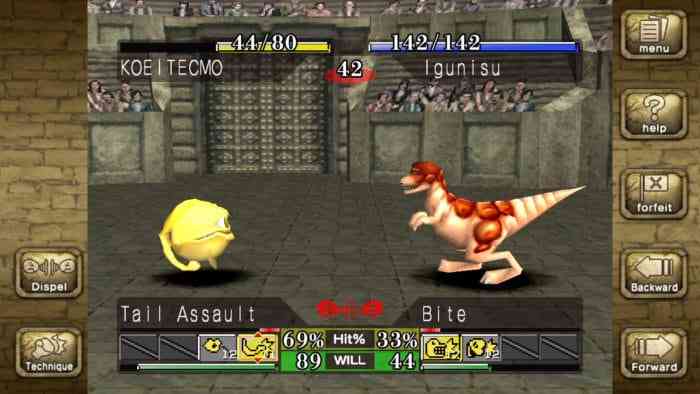 I love that the graphics have just been crispened up. I really love the visuals of the original. It has a Final Fantasy VII-style combination of pre-rendered backgrounds, static anime portraits, and hideous 3D monster models. The monster models, like FFVII’s character models, will likely be a turn-off for some, but I honestly really enjoyed the aesthetic. Even the opening FMV looks like a PS1 quality video, and had a nice presentational balance of 90s video aesthetics, but modern clarity.

The problem with playing Monster Rancher today is that there’s really not much to it. The quality-of-life improvements in Monster Rancher 1 & 2 DX are basically all monster storage capacity increases. A huge addition, for example, would have been the ability to battle monsters online. Even though monsters look different, they play similarly except for their visual aesthetics. Starting stats are low, but obviously get massively built up, and sculpted by the player over time. There’s just not enough diversity in the game to make it more than a novelty. The cheap price tag does help with this issue a lot though. 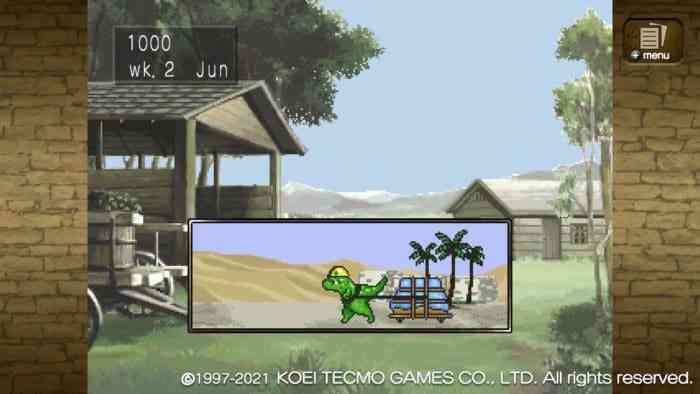 The combination of rumor, magazine publication, and CD trading is what made the Monster Rancher games special. It’s hard to recreate that kind of feeling today. But, Koei Tecmo did it very well. The only problem is that there’s not much content in the game, and without multiplayer capabilities, mileage doesn’t go very far. If I have any advice for anyone attempting to play this game, it’s to share this nostalgic story of how the game worked, and don’t just look up the stats of the best monsters on the internet. Play with some friends, use your favorite albums, and see what you get, because that is what makes Monster Rancher 1 & 2 DX unique. Monster Rancher 1 & 2 DX is an effective nostalgic novelty, but as a monster raising sim, it’s pretty meh. 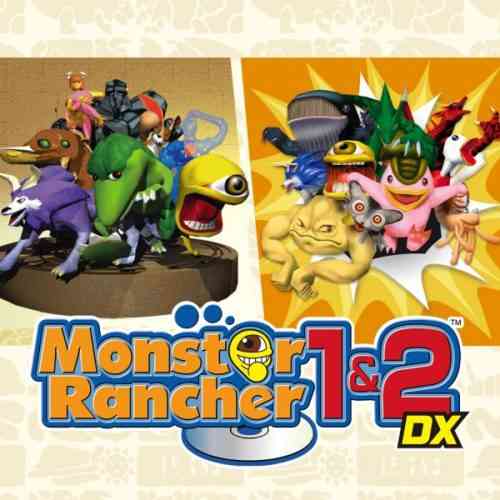