Despite the timing of when it first debuted, Digimon never quite seemed to hit the same level of popularity that it’s monster raising counterpart Pokemon did. That being said, the franchise has a very hardcore fanbase, and has had a number of games in varying quality. Fortunately for those fans of Digimon, Cyber Sleuth and it’s followup Hacker’s Memory are both very strong entries for the Digimon franchise, and Digimon Story Cyber Sleuth: Complete Edition wraps these two excellent RPGs into a must-have for fans not only of Digimon but of monster-collecting games as well.

Digimon Story Cyber Sleuth: Complete Edition takes a very different tone from the cartoons you may recall as a child. There are no digi-destined here, and partner Digimon aren’t quite set in stone. Across both Cyber Sleuth and Hacker’s Memory, you assume the role of an individual who gets wrapped up in a massive conspiracy that’s being perpetrated by the Kamishiro corporation, creators of the virtual world you can access called EDEN. When you first launch the game, you are presented with a choice to start either Cyber Sleuth or Hacker’s Memory, although they are positioned in way that suggests Hacker’s Memory comes first which is not the case. The stories are set alongside each other, serving as a sort of A-Side and B-Side, but I highly recommend you avoid Hacker’s Memory until you finish Cyber Sleuth, as it features a number of developments and characters you wouldn’t otherwise be familiar with.

Admittedly, the story starts off a bit slow on both fronts due to a boatload of text, but thankfully, they do introduce more interesting elements to keep your interest piqued. Cyber Sleuth has you tasked with finding out what happened to your real body after a mishap involving a bizarre creature you run into online, while Hacker’s Memory has you trying to track down your stolen identity and framed for a crime you didn’t commit. Cyber Sleuth’s story definitely resonated a bit more with me thanks to it successfully keeping three separate plots all relatively interesting and merging together into a satisfying end. Hacker’s Memory falters a bit on this front, thanks in part mostly to it playing things a little bit safer, with a story that while entertaining, just isn’t as ambitious as its predecessor. Let’s get real though, when it comes to a Monster Collector game like this, you don’t care as much about the story as you would the gameplay, and it is here where Digimon Story Cyber Sleuth: Complete Edition really shines.

Digital Pets These Are Not

Across both games, you’ll have a party of three Digimon that fill a variety of roles. Combat is kept to a simple rock-paper-scissors style hierarchy, with Vaccine types beating Virus types, and Virus Types being strong against Data ones. This typing matters little early on, but as you progress in the game, you’ll want to keep a well-balanced team. That badass Vaccine monster you just raised? It’ll be far less effective than if you had used a Data monster in its place, but that Data monster will get its ass kicked three ways from Sunday by a Virus one. It’s a simple approach, but effective nonetheless. You’ll encounter plenty of Digimon, and capture them via scanning, which is just done automatically as you encounter them. Combat clips along at a brisk pace as well, and battling the 390 or so Digimon in the game is a total blast.

You’re absolutely encouraged to experiment, and by continually evolving, devolving and loading (using your Digimon as fodder to boost others), you can build some pretty crazy creatures by the end. There are plenty of fan favourites on display, but there are also a lot of really cool monsters you may not recognize, depending on how much time you spent with the series growing up. There’s something for everyone, and the gameplay loop hooked me enough that I wanted to keep on capturing and digivolving monsters as I ran into them while trying to build the best team possible. Battling never gets dull, and I always wanted to mix and match my teams to see what I could come up with. 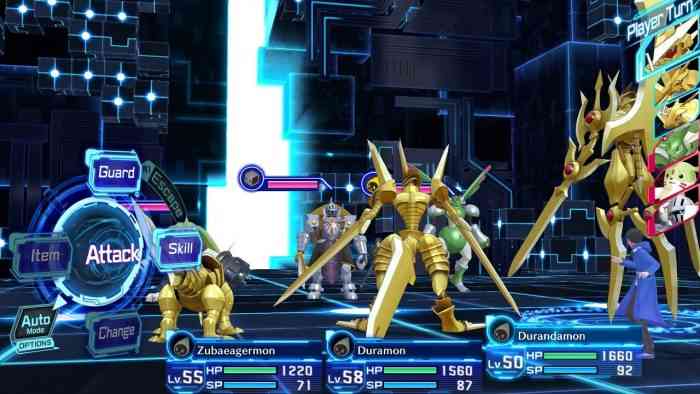 While these are essentially up-scaled Vita games, both versions run excellently, and at no point did I experience major performance issues. There are a few spots that drag, but thankfully it’s still a very solid port. Loads are quick, and it runs smooth. The lack of a real amount of camera control is a bit frustrating at times, as you’re stuck to zooming in and out, but it doesn’t detract enough to really ruin the game in any way. If anything, I was just annoyed that I couldn’t really take in each location’s design in full. You may see a bit too much of the hacker haven known as Kowloon at first, but after the first few chapters, you’ll get to some pretty bizarre regions that stand out from one another thanks to some bombastic color schemes. Each area is also backed by some pretty funky music thanks in part to Masafumi Takada, and there’s bound to be at least one tune that’ll be stuck in your head after you hear it.

Digimon Story Cyber Sleuth: Complete Edition is easily the best way to experience these games. While there isn’t a ton in the way of additional content, these are already some pretty hefty games that you could easily clock fifty or so hours in each. There are a few nice quality of life changes as well such as being able to use Digimon previously only found in Hacker’s Memory, but these were honestly such solid games to begin with that I don’t really think there was much you could do to improve on them. The price is just right too, and getting two excellent RPGs for the price is never a bad thing. If you’re even slightly interested in this type of game, you’ll likely enjoy it as much as I did, despite the few shortcomings it has. 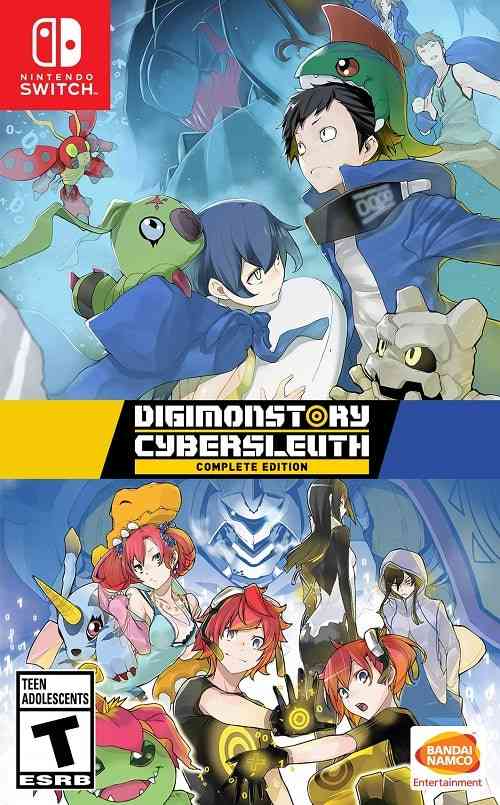