What makes motorcycle racing so different from auto racing is the depth of the connection between the racer and vehicle. In car racing, the relationship is one of empathy where the driver feels what the car is feeling. In motorcycle racing, the driver/bike relationship is that of symbiosis. Not only does the driver feel what the bike is doing, but the bike reacts to what the racer is doing with their body. How the biker is leaning or shifting their weight has a direct impact on how the bike acts. The best comparison would be the one between a rider and a horse.

This symbiotic relationship makes motorcycling so vicariously appealing. It also makes simulating motorcycle racing so difficult. The feedback mechanism between player and game is just not there. Simulating racing, a car took a big leap forward when Force Feed Back (FFB) wheels became available. Further steps such as butt-kickers to simulate track conditions or full-out hydraulic sim rigs take the illusion even further.

Motorcycle sims have not been privy to a similar consumer-accessible FFB mechanism. This changed in 2020, with the PS5 and introducing the Dual Sense. I first experienced this with another Milestone motorcycle game – MotoGP 21. With the adaptive triggers, players can feel how much throttle and braking they are applying. This is vital, as this degree of control lets you better finesse your way around a track. Less impressive was the use of haptic feedback. MotoGP takes place on surfaced tracks and the game confines the only use of the haptics to some rumble when crossing over curbs or going off-track. MXGP 2021’s – use of haptics is even less used because that racing being done on dirt tracks. Racing through dirt and mud obviously leads to softer, less defined sensations. Unfortunately for MXGP, this means a muffling of the feedback between a player and their bike.

Digging In The Dirt

I only felt any feedback when going off track or hitting bumps and/or landings from jumps. There is no proper sense of sliding through sand or slipping through mud. The game tries to imply them mostly through sound, be it engine pitch or tire scrub. Maybe the haptics of the Dual Sense are not capable of intricate detail, but I bet it is capable of more. MXGP 2021 has big shoes to fill for hard-core bikers. It is the officially licensed product for Motocross bike racing. From the licensing side, the game has its bases covered. Included are all the official tracks, bikes and drivers.

There is a new career mode that places an emphasis on your reputation. You can choose to ride for an official team or create a custom one. Whatever route you choose, you will need to deal with sponsors and contracts in ways that best support your advancement.

There are several game modes you can choose from. The Quick Mode offers Time Attack, Grand Prix, or Championship racing. Another option is the Playground. Here you can do some free-roaming off-track driving or ride to several waypoints. Each Waypoint offers a different challenge. There is Enduro which gives two obstacle courses. There is also a Jump Course and Time Trials. 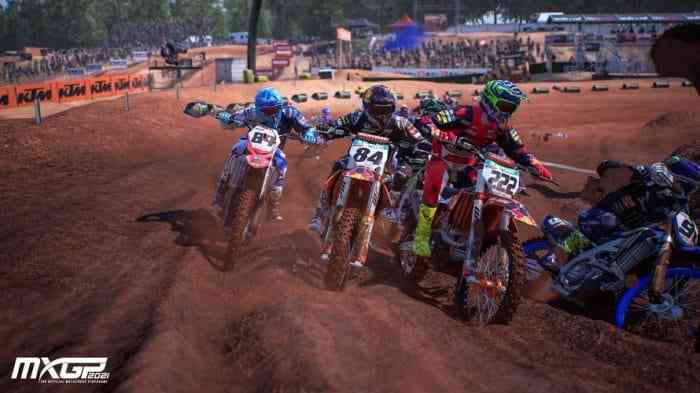 The game also features a Track Editor where you can design and share tracks with other players. There are four environments to choose from – apple orchard, plain, woods, or quarry. The interface for this is pretty slick. You drag-and-drop track shapes over the terrain which reconfigures itself to accommodate each new piece. Besides the course layout, you can designate where the start/finish lines are, add terrain features such as jumps and ditches, and add buildings.

MXGP gives another standard portion of this type of game to Customization. You can customize bikes, and rider outfits – helmets, goggles, suit, boots. This includes not only changing colors and numbers, but sponsor logos as well. 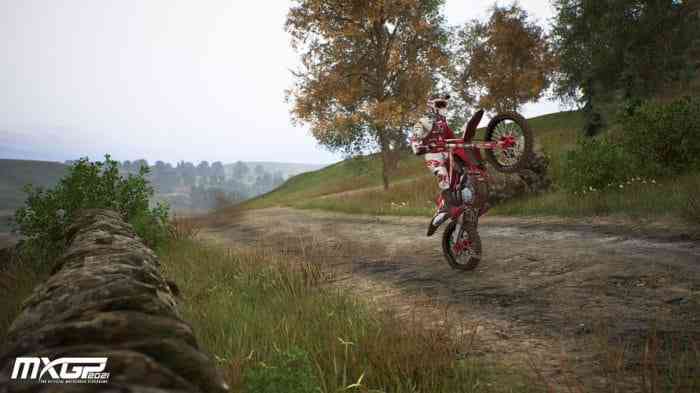 In terms of presentation on the PS5, the menus are clean and snappy. Load times are quick as expected on the PS5, but for those gaming on a PS4, expect those excruciating minute-long track loading sequences. Graphically, the game looks realistic. Compared to the 2020 version of the game, they have definitely toned the vibrancy of the colors down. Which version looks better is a subjective choice. I prefer the look of the 2021 version.

Sound-wise, the game presents a good sound stage. The bike engines growl and whine in accordance with when you are accelerating or the bike is looking for traction. The latter is an important cue used to know when to throttle down or not. It also points out the lack of haptic feedback during such moments, as the Dual Sense lays dormant in your hands during such moments.

Bringing this back around to the heart of the game – the physics. It’s definitely a mixed bag. The adaptive triggers are great. The haptic feedback not so much. Track physics is inconsistent too. The main on-track modeling that happens is on cornering with centerline berms aka piled up dirt. You’ll definitely feel a jolt going over these. However, you never feel the twisting and sliding of the wheels as they cut a trail through the dirt. Jump landings, however, provide a welcome controller jolt.

MXGP 21 is a tough game to review. Riding on dirt tracks is a much harder thing to simulate than doing so on paved ones. However, one can only judge a game by how much enjoyment it creates. For myself, I was often more frustrated than elated. Though the game includes a bevy of options to make MXGP 21 accessible to everyone, it’s a niche racing genre that will appeal mainly to dedicated fans. The other big knock on this game is the changes from the 2020 version are only incremental. 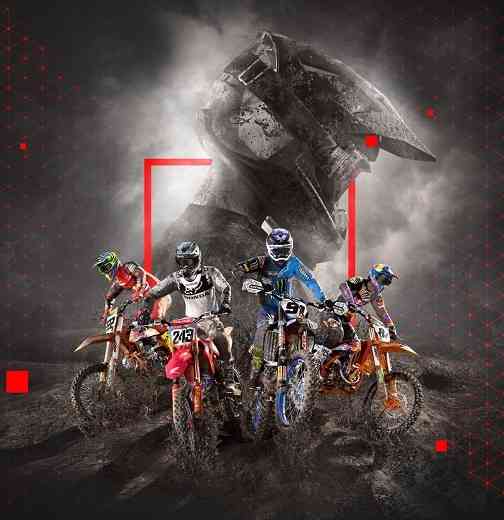