If you’ve read any of my previous reviews about motorcycle games, my biggest reservation of them has always been the lack of input feedback. While Italian developer Milestone has been passionate about their motorcycle line of games that include the MotoGP, Supercross, MXGP, and RIDE series, that passion could not overcome the barrier of controllers that cannot properly convey the forces at play riding a bike. Well, technology has finally caught up to their vision, at least on the PlayStation 5 platform, specifically due to the DualSense controller.

We’ve all been wondering how much impact the DualSense would have on the next generation of gaming. Playing Astro’s Playroomgave us a tantalizing glimpse, but we also knew it would be up to developers to utilize the tech inside the DualSense. How much more immersion would the haptic feedback and adaptive triggers add to a game? For racing games, a little immersion goes a long way. But as big as tactile feedback is in enhancing an experience, a game needs to bring the complete package to fully work. It depends on the genre of course. For racing sims, the game must mimic a realistic racing experience both off and on the track.

Milestone has been in the videogame business since 1994 and stepped things up in 2012 when they started publishing multiple motorcycle series. So they bring a lot of experience to the table. How did Milestone fare this year? Let’s suit up, hit the track, and find out.

A core element of sports games is allowing the player to recreate a season. With MotoGP 2021 all the official rosters and tracks of the 2021 season are included along with appropriate weather conditions. Racing in the rain, anyone? Beyond the bikes and tracks, hardcore players want to be able to simulate all aspects of a racing career. Milestone has heeded that need and you can manage your career from all aspects. You can create a crew for an official team or a brand new one. You can pick your staff to crew the team, including a manager, chief engineer, and data analyst to help you capture that sweet championship. 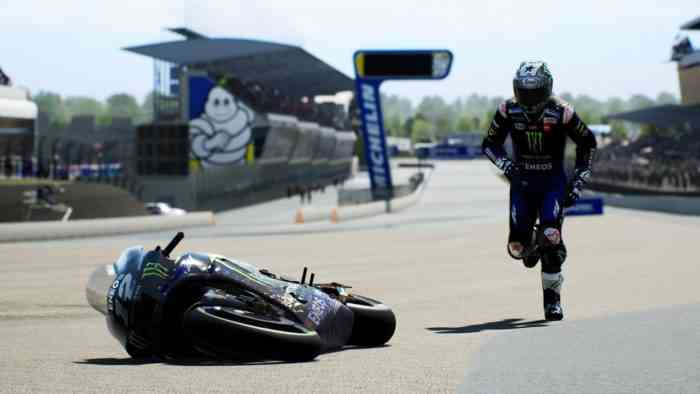 Always a welcome bonus is the inclusion of historical content and MotoGP has this covered too with forty famous riders and their bikes included. Gearheads need not feel left out on the control aspects of the game, as you can manage tire wear, fuel consumption, brake temperature, and bike suspension not only in the garage but in many cases while in a race too.

Of course, tricking out your bike to suit your needs is only part of a racer’s persona. Looking good doing it is just as important. Well have no fear, you can customize how sharp you and your bike will look too.  You can customize your helmet, suit, the stickers on your suit and bike, the racing number on both, and the liver with five graphical editors! As an added bonus you can also share your designs with other players.

MotoGP allows for single and multiplayer racing.  On the solo side of things, Milestone is boasting about improved AI with ANNA. ANNA stands for Artificial Neural Network Agent. This is a Neural AI that adapts to your racing style and characteristics to bring you better single-player racing experiences. It remains to be seen how this plays out over the long term, but from my testing, the AI was pretty tough but they did act in a reasonable manner. Besides the career mode, there are the expected other modes that include tutorials – vital for new players, quick races, and time trials.

To accommodate multiplayer racing, Milestone is providing a dedicated server that is promised to deliver low latency – vital in racing sims, reliable connections, and high bandwidth. You can enter into official events or through the use of the Race Director Mode, tailoring races to your preferences to challenge other players.

Milestone has also included two new features to add to the realism. The first is the addition of the Long Lap Penalty. If you cut the track, you will be flagged as in real-life racing with a penalty. This means you will have to do a lap and take a route that includes an additional distance to travel. Hence the term, long lap. The second addition is Bike Retrieval. A la Road Rash – if you crash, you can opt to actually run back to your bike. The default has always been to instantly respawn. In its current implementation, it has two problems. It looks dorky as hell when you are running like you are running with a full diaper load. Secondly, in the single-player mode, the Bike Retrieval option only applies to you and not the AI. Milestone has promised to patch this so it can be applied to the other riders too.

Also included are record and replay functions. They are deftly tied into the PS5’s Photo and Record Media functions. As expected on the next-gen platforms, the game runs with dynamic resolutions up to 4K and at a locked 60 FPS. The game looks stunning and has great weather effects such as rain and thunder/lightning effects. One real boon is the shorter loading times across initial start-up as well as navigating to races. For multiplayer there will be an increased number of online players per race supported as well. 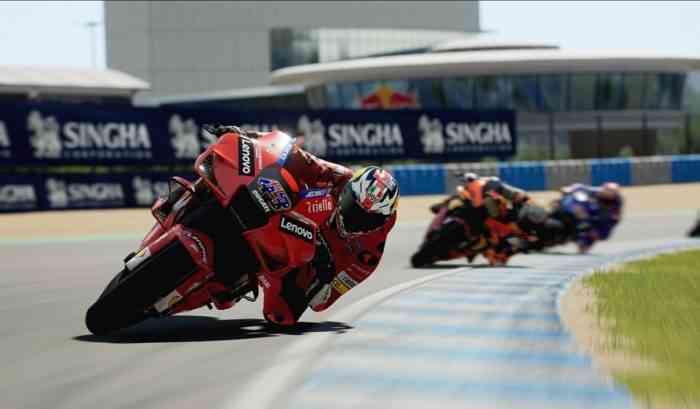 However, the real boon is the DualSense controller. This differentiates the PS5 version of the game from all the other versions. Finally! An input device is available to let a player feel what it is like to ride a bike. Make no mistake, this is a game-changer of a revolutionary nature for bike racing. The adaptive triggers are used for the gas and front brake, and feeling resistance as you apply either of them may seem like a small thing but the tactile impact is amazing. Now you feel your inputs are making a tangible difference to what is happening on the screen. It’s one of those – you have to experience it, to fully appreciate it – things. For me, it was simply amazing. Somewhat less amazing is the haptic feedback, but getting some rumble and vibrations when you hit the curbing or go off track is still welcome. Understandably, having the controller giving off constant haptic feedback of the racing surface would be a quick battery-draining exercise.

All of this new immersion really gets you leaning into those deep slants around corners that motorcycle racing is all about. Very exciting stuff! No doubt, I wouldn’t be as enthusiastic about this game if it weren’t for the PS5 DualSense controller. Milestone has gone the extra mile with MotoGP 21, even having an enhancement roadmap you can view on their website. The roadmap clearly outlines improvements planned for May through June. Those updates include adding new bike categories, expanded player controls, and joining in-progress qualifying sessions instead of having to wait as a spectator. While MotoGP 21 is available on all gaming platforms, the PS5 with the DualSense controller is the premium way to play this game.