When I first read about Manual Samuel, it intrigued me. Unfortunately, the final product is a tedious and frustrating experience that won’t win the hearts of many despite its developers’ best intentions.

Things begin in a swanky coffee shop, where our main character (Sam) is sitting at a table with his girlfriend, whom he’s ignoring. You see, young Sam is an asshole; his large trust fund and lack of real responsibilities make him feel superior to everyone around him. Yet, he’s somehow managed to keep this seemingly attractive girlfriend for three years. Well, up until now, that is. 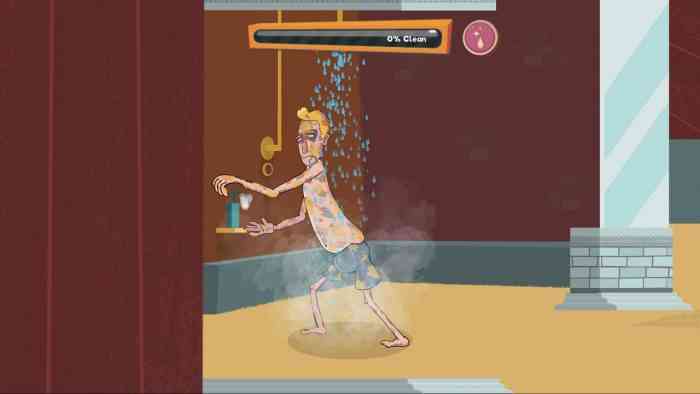 After forgetting her birthday yet again, our jerk of a protagonist is dumped and hit with an unexpected shot to the face that leaves him reeling. When he comes to his senses and chases the one good thing in his life out into the street, he’s struck yet again, this time by a truck carrying human waste.

Luckily for our hero, Death decides to play a game by allowing Sam to pay his way out of Hell. The only problem with this deal is that, in order to continue living past the first day, Sam will have to complete a bet set forth by the reaper. What kind of bet? Well, he’ll need to do everything – from blinking to breathing – manually for twenty-four hours.

“It’s comical and unique, but it’s not very fun.”

For this silly scenario to suck you in, you must forget the fact that we, as real live humans, do everything manually to begin with. Our body simply aids us. In Sam’s case, he’s only able to do one thing at a time, and must put all of his effort into said task, so there’s a bit of a difference.

Thus, a ‘game’ is born, wherein the player must keep Sam alive and help him do his daily tasks until the clock hits midnight and the day ends. This means using separate buttons to move each leg, holding buttons in order to hold important items, and occasionally playing controller Twister as a result. It’s comical and unique, but it’s not very fun.

“Yes, Manual Samuel somehow takes place in the one town where old ladies litter the roadways.”

Things begin innocently enough, with Sam needing to brush his teeth, attempt to pee into his toilet and get dressed for work. Then, driving ensues, wherein Death instructs Sam as to how he must operate his newly transformed manual car and avoid old ladies while doing so. Yes, Manual Samuel somehow takes place in the one town where old ladies litter the roadways.

It’s all silly and offbeat and wants to be remembered as something hilarious. However, despite the odd funny joke, Manual Samuel’s one and a half to two hour-long runtime is mostly comprised of annoyance, frustration, and prayers based around wanting the credits to roll as soon as possible. At least, that was my experience with it. 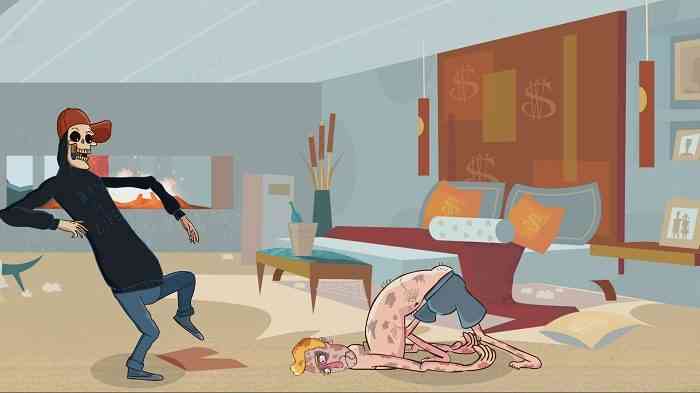 As much as I wanted to enjoy this game, I struggled to do so, and had a hard time finding any fun within it. Sure, it has a comical premise, but with gameplay that is as tedious and frustrating as it is, there’s little fun to be had. Sam is a pain in the ass to control – which is surely part of the joke – and more often than not I was struggling with the controls to do basic things. This was especially problematic when I came up against the final boss, who will go down in history as being one of the worst I’ve ever dealt with, which is saying a lot after more than twenty years of gaming.

“Simply put, Death is annoying and Sam is easy to hate.”

As far as presentation goes, Manual Samuel looks and feels more like a Flash game than anything else. Its drawn-in visuals are reminiscent of a Flash-based comic book or animation, and both the dialogue and tongue-in-cheek narration that go along with it are reminiscent of junior high school banter. Hell, maybe that’s even giving it too much credit. Simply put, Death is annoying and Sam is easy to hate. This makes it all culminate into something that the player will either be annoyed by or not care about at all.

At the end of the day I simply cannot recommend this game to anyone. It’s not entertaining, nor is it memorable for any good reason. It’s simply frustrating, annoying, problematic and painful to play. Skip it, and spend your money on something much more deserving of it than Manual Samuel is. 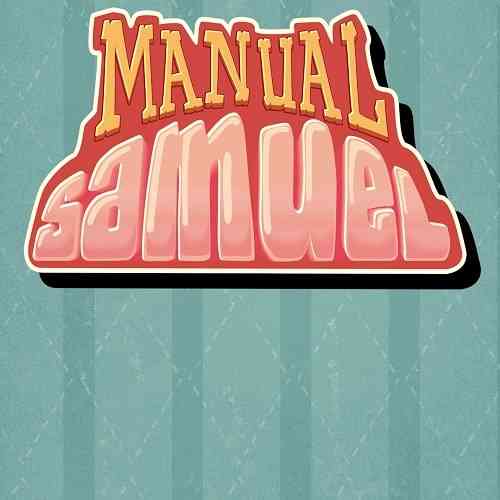 
Arcade Firefighter Embr Spreads to All Platforms Next Month

I Am Fish Will Have You Hooked This Summer

Just Die Already Will Be Coming to Consoles as Well as PC
Next Shu Review – Beautiful, Frantic, and Fun Artistic Platformer
Previous Barrow Hill: The Dark Path Review – A Little Too Much Blair Witch