Fictorum is a fantasy thought experiment of sorts. What if your character wasn’t forced to suffer through hours of tutorials, lessons and narrative checkpoints in order to become an all-powerful murder machine? What if you started the story at a point after all the training montages and spell upgrades? Why, you’d be the Fictorum, a wizard whose power has no equal in this game.

You play the last surviving member of an order of wizards hunted almost to extinction by the Inquisition.  Your goal is to find and eliminate their leader, the  Grand Inquisitor, in order to avenge your fallen comrades. Along the way, you’re presented with opportunities to help local citizens in exchange for resources and loot. Your decision to help these people is complicated by the ever-encroaching threat of the Inquisitor’s army. Every time you stop and save someone, they get closer. Stages that were pretty laid back get savagely difficult once the Inquisition takes over. Do you act as a force for good, or do you blow these people off and keep charging ahead? You are a man on a mission, after all. Your fallen comrades won’t avenge themselves.

“The lightning bolt spell is a sniper rifle shot that can blow apart buildings.”

Combat is a marriage of innovation and execution. You choose your runes, take aim and unleash magical hellfire on your foes. The trouble with this is twofold. Both rune selection and aiming drain mana, just like casting does. If you run out of mana in the middle of a spell, the cost is paid in life instead. So right away your motivations lean towards casting quickly, so you keep enough mana between attacks. This means you end up leaning on the basic spells for most regular battles. It’s a fine strategy, just a little lacking in creative opportunities. The other problem is power. You’re a legendary wizard right from stage one. That means your initial catalogue of abilities is insane. The lightning bolt spell is a sniper rifle shot that can blow apart buildings. The fireball spell has runes that turn it into a full-fledged mortar launcher. Awesome right? Did I mention that the environment is destructible? What possible downside could there be to this kind of god-like power? Well, if you’re not careful you’ll bring a building down on your head. 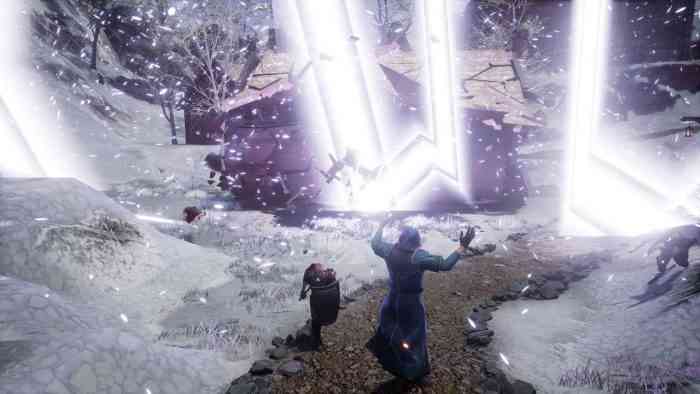 But, you know what? Destroying the bridge you’re standing on is a small price to pay for such crazy strength. Knocking down a castle wall feels so good, you don’t even mind when a bit of it crushes your skull. Shooting lightning, casting fireballs and flinging ice spears is a great time. The experimentation with the spell runes feels more practical than I expected. If your shot doesn’t reach an enemy or feel strong enough, you can augment it. There are runes for piercing, but people rarely line up for you. Or you can apply damage over time, but I never felt like I had that kind of luxury. You can apply more than one rune to a spell, but combining that with the slow mana drain while aiming meant risking your life. Hit points in Fictorum are a precious commodity. If you get hurt making a stupid mistake, it’s almost impossible to recover from. It would be easier to die, starting over at your last save point. You don’t accumulate potions, hoping instead to stumble across them on your travels. I quickly learned that half-crumbled houses were literal death traps. Debris causes damage no matter how slowly it hits you. If you’re picking your way across a heap of wreckage and it starts to shift, you can easily lose a quarter of your health. 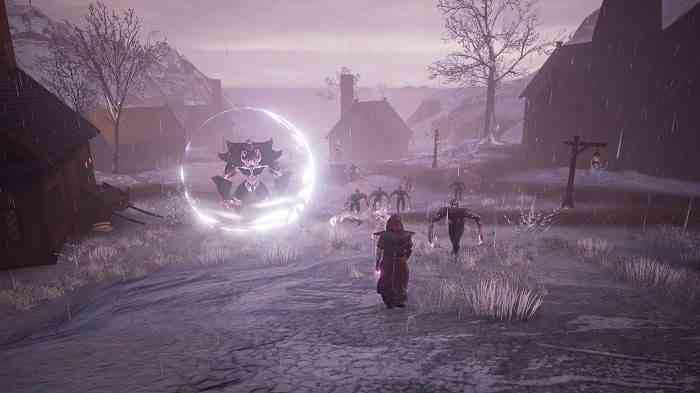 Everything about this game is designed around casting these insane spells. This serves as both a benefit and a detriment. You waste zero time getting to a place where you can experiment and master your skills. The aiming is precise, as well. I was able to make incredible shots from the far side of a stage, sniping pinprick opponents with a single blast. Those deadly bits of debris are equally effective against you and your opponents. Even if you miss a group of mages and hit a building, the splash damage will finish the job. The destruction physics were satisfying enough to keep me around a stage after completing my objectives, just to blow up a few more buildings. Yet, some areas of the game suffer a bit as a result of this intense focus. the world map where you move from stage to stage is so basic it’s almost crude. All your interactions with villagers and enemies are represented by text. There’s something like two or three songs that cover every level you encounter. The procedural generation which governs what levels and people you find seems like its shuffling a short list of assets. I recognize the value in casting these things aside if you want to focus on a narrow slice of gameplay. Even so, Fictorum’s bones can poke through the skin on closer inspection. Maybe I’m asking for too much, but I want more motivation to save these people. It’s a relief to know that my wanton destructive outbursts don’t come with any negative repercussions, but it feels a bit empty as well. If I accidentally blow up a villager or ten, shouldn’t the game make me feel bad about it? The game’s design sends a clear message, namely that no one and nothing should get between you and your bloody vengeance.

“Everything about this game is designed around casting these insane spells.”

This game has a curious blend of strengths and weaknesses. What’s done well is exemplary, while the game’s problem areas were excised altogether. There’s no consequences for being cruel or mindless, and no motivation to be anything else. Rather than present you with any moral quandaries, Fictorum presents you with a simple set of goals and a series of obstacles in your way. Sometimes those obstacles deserve your wrath, and sometimes they don’t. In the end, so long as you achieve your vengeance, the collateral damage isn’t important. I would have loved some non-combat areas to explore, people to interact with or things to do besides murder hapless fools with powerful magic. Said murder-magic is expertly crafted and incredibly creative, but there’s little else to sustain you. If you’re into fast-paced magical combat, you’re gonna have a lot of fun with Fictorum. If you’re not, there’s no game left here for you. 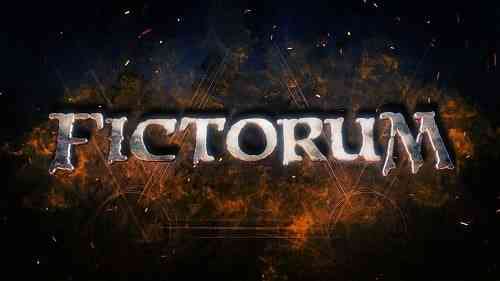