Mega Man fans must be in the most curious conundrum these days. There hasn’t been a new title featuring the blue bomber in years, Capcom seemingly content to let the character rest on his laurels. Instead, we’ve gotten guest appearances in games like Super Smash Bros and Marvel vs Capcom, the upcoming animated TV show, and the Mega Man Legacy Collection series. Part one of the Legacy series was a whirlwind tour of the NES era, covering every major title from Mega Man’s 8-bit catalog. Part two is a bit more of a hodge-podge, featuring one Super NES game, one PSX title, and two digital releases. Much like the first collection, you’re probably asking yourself if it’s worth it to pick this one up, especially if you already own any of these games. Let’s get into that, shall we?

Mega Man 7 is a weird game. Released after the X series had already been dominating the SNES landscape for a few years, 7 was a step back in many ways. At least, it felt that way if you’d never played the NES games. On the other hand, it’s the first game in the series to feature the shop for replenishing crucial supplies. This almost makes the game too easy, at least in the beginning. Once you get to Wily’s fortress all those little bonuses don’t mean as much.

“Any one of these titles could be used as an argument for getting the whole collection.”

Number 8 holds a special place in my heart, which is amazing, as I never played the game in my youth. The graphics and sound are all perfect time capsules for that entire era of gaming. The bizarre English dub used in the introductory sequence is so perfect it belongs in a museum. The controls suffer a bit, but the blistering pace still never feels overwhelming. Clown Man’s stage is terrible, though.

Lastly, we come to the throwback titles. Mega Man 9 and 10 are beautifully-crafted packages, with excellent controls and pixel-perfect presentation. I have a heady fondness for Mega Man 2 and 4, and these games pull me back there effortlessly. 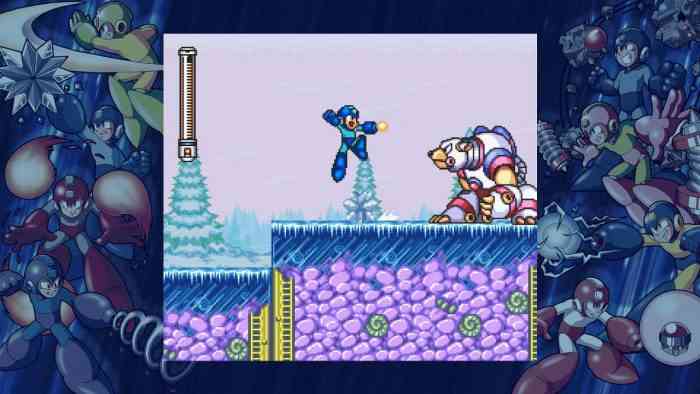 Any one of these titles could be used as an argument for getting the whole collection. Number 8, in particular, is a gorgeous slice of 32-bit action worthy of your time and effort. Beyond the appeal of the individual titles, there are benefits to acquiring them in this specific format. You’ve got the music collections, time trials, remix challenges and easy modes. Best of all is the checkpoint save system, which works to alleviate the pain involved in running out of lives.

One major issue I have is with certain aspects of the controls. The analog stick is almost useless for movement, mostly due to the accidental slides you pull off. Waiting patiently at a pit for a platform to come back? Sounds like a great time for a slide! Only have five percent health? In the middle of a grueling boss fight? Why it’s sliding time! After a couple of these frustrating deaths, I just went d-pad for everything. Even if the stick feels better to use, the risk just isn’t worth it. An added bonus to the modern controls is the burst-fire button. Instead of mashing square until you develop muscle cramps, you just hold that button down instead.

“Even though these are all solid titles, something about this just feels like a ‘B-sides’ collection of sorts.”

What collection game is complete without extras? On top of the items already discussed, Legacy 2 comes with a healthy dose of original art and music to sift through. It’s all quite lovely, but I feel like the appeal is lost unless you’re an enormous Mega Man fan. I didn’t touch the remix levels, I’ll be totally honest. My skills at Mega Man are rough enough I didn’t feel like pushing them with any brand new content of a higher difficulty level.

Okay, so the games included are all great, but I’m pretty sure my feelings on Mega Man 8 are clouded by its aesthetic presentation. The controls feel slow and clumsy compared to the other titles, like the advanced graphics are weighing down the game, somehow. The level design is less about ingenuity and more about looking good. Certain enemies actually got easier due to extra animation frames revealing their weak spots. Plus, the first power you acquire is a ball for kicking around the screen. I can’t be certain, but the game might be terrible. Another point against Legacy 2 is that there aren’t as many games as the previous volume. More than just a numbers game, it feels like volume one represented a singular era in graphics and (more importantly) design. Even though these are all solid titles, something about this just feels like a ‘B-sides’ collection of sorts.

Don’t let these complaints dissuade you, though. If you’re a high-level player, then the remix stages and time trials will be an excellent addition to an already robust play experience. If you’re not quite as skilled (like me!), then the checkpoint system might just be what gets you to finish these games for the first time. Even though none of these are NES titles, these are still ‘Nintendo-hard’ games, in their own right. Just so long as you can avoid accidentally using the analog stick, you should have a pretty good time with Mega Man Legacy Collection 2. 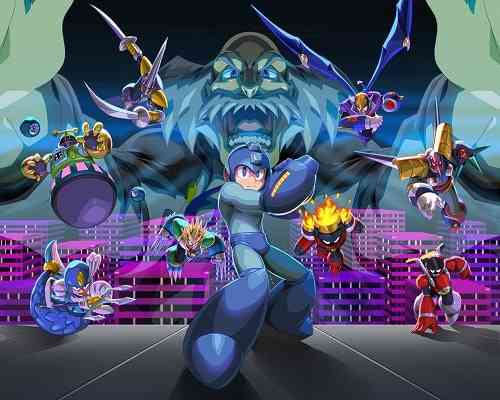