Take heed, weary traveler, for the town before you is not one to enter unless you seek to meet your maker. The town of Darksburg is overrun with the fallen dead, now back from the grave! Published and developed by Shiro Games, Darksburg may be a roguelite at its core, but its inspirations from games like Gauntlet and Diablo are what really make it stand out. The game has a very straight forward narrative: the town of Darksburg has been overrun by the undead and is currently under siege. Your plucky band of unlikely survivors must work together to find the source of the undead and get to safety. The cast are not only diverse and wholly unique from one another, but the artist who worked on their designs had a hand in some popular characters you’ve seen in Blizzard titles – a comparison that becomes wildly apparent as soon as you see them.

While you’ll only have access to five characters initially, their playstyles are quite different from one another and fulfill a number of roles for the team. While Runolf and Varag are both great at tanking, Runolf also happens to be a very effective healer with some great regenerative powers. Rose the mercenary uses hand crossbows and is at her absolute best when standing back and letting the rest of the party get up close. Sister Abigail is truly lethal with her holy flames and surprisingly quick on her feet, and the mysterious Dolorosa is an agile glass cannon of a plague doctor. Whether you are playing solo or with friends you can load up your team to a maximum of four players to give you the best chance at surviving. Any vacant spots on the team can be filled with AI allies for maximum survivability. The actions of everyone pool together towards the Team Experience which, when leveled up, lets everyone unlock one of three random perks to augment your abilities and play style. It’s something we have seen before but it has been one of the driving motivators of roguelites for years; Getting an awesome combo of perks makes it that much more devastating when you die.

The AI itself is quite serviceable, using its abilities often and to great effect. They even realize if they are damaged to go for the nearest healing item. While they do a great job of helping you out it still is no replacement for a human partner, but it does help in a pinch. Along the way you will collect Dreadium Ingots, a resource you can spend at the start of the stage to unlock Curios. These are equippable perks and abilities to make your run easier. Should you die, all unlocked Curios remain unlocked and your Dreadium carries over, meaning you can farm to get more and more gear. The Curios are a great touch and for those who love to collect things you’ll no doubt have a blast trying to unlock every last one. 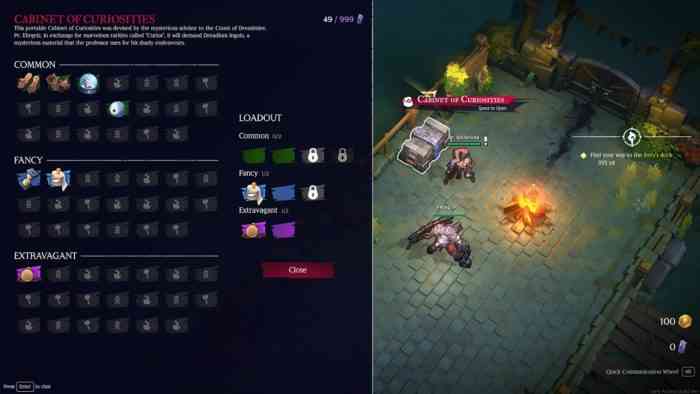 On my first run in single player I stepped out into Darksburg as Varag the werewolf and brought only Rose with me. I was excited to hear the banter between the two of them as Rose was the one who captured and imprisoned Varag before everything went to hell, but the two remained rather quiet for much of the experience. The missions you encounter in the stage are random and fairly varied with my favorite being a large locked door with some survivors on the other side who need supplies to nail the door shut and protect against the undead. I had to defend the door while collecting the supplies, but the AI for Rose stuck to my hip rather than splitting the party to get things done. This is where I would have preferred a human ally, but we overcame the forces of darkness nonetheless.

I much prefer gaming with a controller in hand, however Darksburg is a rather traditional PC game in that respect. I gave it a shot at remapping the inputs to my controller but the end result was as monstrous as the bad guys. I would love if Darksburg eventually made its way to console or even added controller support in the future as I’m most comfortable in a roguelite with twin stick controls in hand. I’m also a little disappointed at the lack of a dodge function. Varag at least has a shield to block and Rose can leap out of harms way, but when I found myself in a tight spot my only option was to move at my regular pace and hope it was enough. The survivors also move at roughly the same speed as the shambling dead, so trying to track one down with a short melee hit box was a little more time consuming than I had hoped. 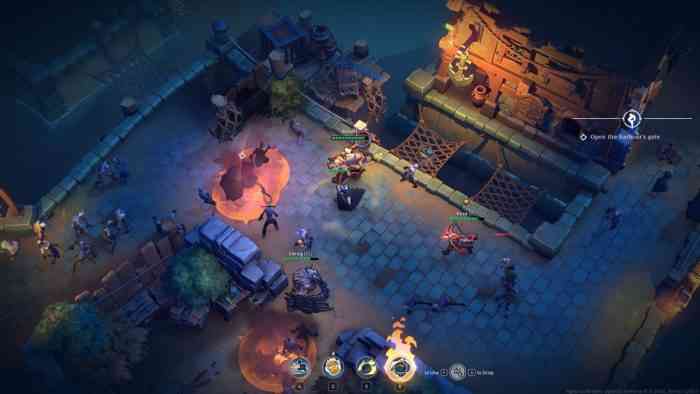 While these minor issues did come up for me, the moment to moment gameplay was intense and incredibly fun. Pulling off massive attacks that destroy crowds of the undead feels fantastic and the town of Darksburg has a beautiful design I almost wouldn’t know was procedurally generated. The lighting and field of vision mechanics are exemplary and keep you on your toes as you truly never know what might be around the corner. I managed to get to the third stage of the game after just under an hour of playing, so there is plenty to see and do in each location. I imagine the more Curios you have unlocked the further you’ll be able to explore.

Darksburg is an exciting, dark roguelite with tons of replayability. The cast of playable characters is diverse in their play styles and these are only enhanced with Team Experience power ups and the Curios. The setting is beautiful and lush – far more than I expected out of a procedurally generated experience. The AI companions are good enough to keep you alive but the game really shines in Co-Op with other players. I would love to see controller support or a dodge roll to make managing the horde a little more balanced, but all in all it’s the kind of experience meant for friends diving into dungeons and just having a great time. 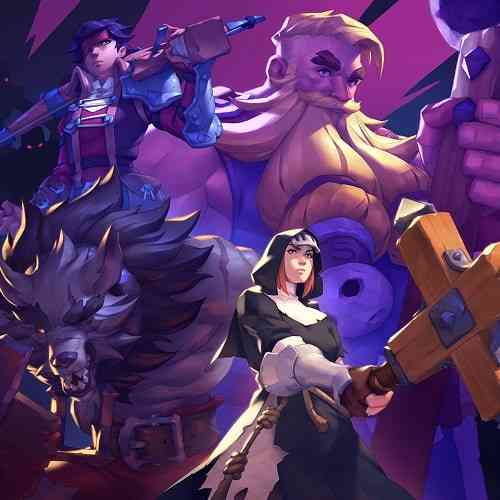