It’s been nine long years, but Serious Sam Stone is finally back with a brand new first-person shooter for all your gun-slinging needs. Serious Sam 4 is a fresh new take on the Serious Sam franchise and acts as a prequel to the original three games. Don’t worry, Serious Sam fans, everything you love about the franchise is still here, including all the epic battles and frantic action. However, the developers have put in a substantial amount of work in every other aspect of the game to make it feel like the most complete Serious Sam experience to date. In truth, while I’ve played all the previous Serious Sam games to some extent, I usually ended up getting bored and moving on to something else. This is not the case with Serious Sam 4, it was an absolute thrill ride from start to finish and easily one of the best first-person shooters of 2020. It has its flaws, which we’ll discuss, but if you’re looking for some action for your itchy trigger finger, Serious Sam 4 might scratch that itch.

Serious Sam 4 takes place prior to the events of the original three games. The nefarious series antagonist, Mental, has begun his invasion of Earth and sent one of his generals, Lord Achriman, to oversee Earth’s destruction. Standing in Mental’s way is the EDF, or Earth Defense Force. You’ll take on the role of Serious Sam, as he leads a ragtag squad of EDF soldiers through Europe on a quest to find the one thing that could potentially stop Mental’s invasion, the Holy Grail. Along the way, resistances will rise, comrades will fall, and one-liners will be spoken. Lots and lots of one-liners. 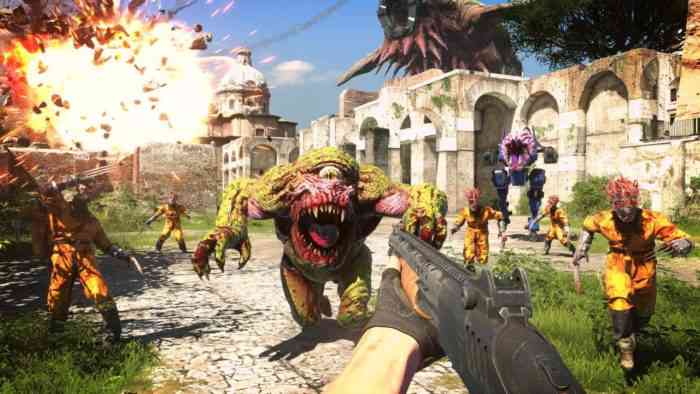 If you’ve ever played Serious Sam games in the past, you know what to expect. It’s an arcade-style first-person shooter with a whole lot of circle-strafing and backpedaling. In previous games, hordes of enemies would swarm towards our hero. In Serious Sam 4, the hordes get amped up substantially with the new Legion System which allows for hundreds of enemies on screen at once. It truly is a sight to see. Fortunately, you’ll be armed to the teeth with 14 different weapons ranging from the shotguns to miniguns to a cannon – yes, an actual cannon. And with over 30 different types of enemies, you’ll be swapping between your weapons often because survival will often depend on using the right weapon for the right enemy. You’ll also be equipped with a handful of gadgets, including the Time Warp that slows down the enemies and the Black Hole that is probably one of the coolest gadgets I’ve ever seen in a first-person shooter. The gameplay is fast, furious and a ton of fun. When you’re not kicking ass, the environments have a handful of secrets hidden throughout – I was able to get a few secrets, but often the secret would be in some obscure location and I would have no idea to get to it. Maybe I was just missing something or maybe the levels need to be tweaked a little to make the secrets a bit more accessible.

The Good, The Bad, and The Ugly (Visuals)

In Serious Sam 4, enemy character models, environments and landscapes all look pretty good. Serious Sam has a slender, almost lanky look to him, which is far less intense looking than his Serious Sam 3 look. The one issue I noticed constantly with the character models was their eyes. Often the eyes would look pretty vacant like they’re staring off into the distance. However, the creepiest moment was this character who would blink, yet the eyelid wouldn’t cover the eye, so the eyelash looked like a windshield wiper. The environments throughout the game are quite diverse, ranging from city streets in Italy to the frozen lands of Russia. While these environments and levels were quite vast, the downside was frequently repeated and muddied textures. Buildings looked great from a distance, but up close, they got a bit ugly. Enemies were vast and varied, and there were times when dozens and dozens of enemies would fill massive fields. I can’t recall ever playing a first-person shooter that had so many enemies on the battlefield at any given time – there were moments that were simply incredible to see. And often in the horizon, enemy capital ships would hover amongst the clouds, adding to the apocalyptic atmosphere. The level design is the best yet in a Serious Sam game, with a nice mix of close-quarters combat and open areas to truly unleash hell. In the audio department, the soundtrack is absolutely spectacular. During the games less shooty parts, you’ll be treated to beautiful music that accentuates the landscape. However, when the bad guys show up, the music amps up aggressively to help motivate the ass-kicking. Another highlight is the game’s voice-acting, most of which is done surprisingly well. The clever and witty banter amongst the characters is delivered masterfully and really adds to the overall package. And, of course, our hero Serious Sam is still voiced by the incredible John J. Dick, who absolutely nails the dialog. 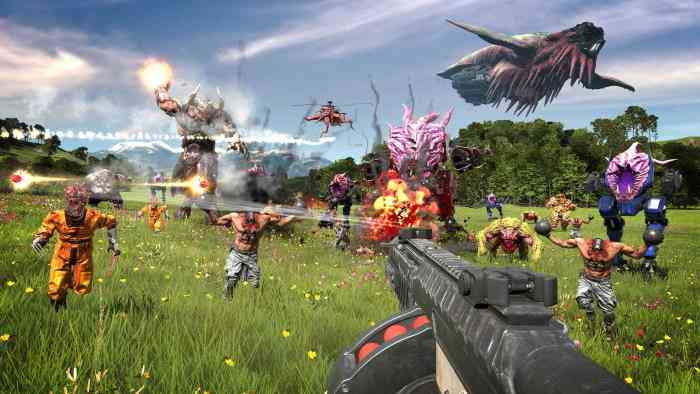 Serious Sam 4 does feature an online, 4-player, co-operative mode. There is no character select option, everyone plays as Serious Sam. The host can pick the initial level, but after that, anyone can request a level that leads to an in-game vote. The co-op is drop-in/drop-out, which makes finding a game quick and easy. I did find there were some minor lag issues during my online time, but nothing too annoying. One cool feature to note, beside every player’s user name is an arrow and a number indicating direction and distance away from you in-game. With the Serious Sam levels being so large, this came in handy to help keep the party close together.

Serious Sam 4 is seriously an outstanding first-person shooter. The gameplay is a ton of fun, and while it mostly involves shooting – there is a level of strategy required in using the right weapons at the right time. The visuals are a bit of a mixed bag. While I was impressed with how big the environments were and the enemy character models, I found some of the human character models were a bit, off – especially their vacant stares. There were some bizarre bugs, both visually and gameplay-wise; however, the day one patch will clear up some issues. The soundtrack and voice-acting is top-notch and the dialog is some of the most entertaining I’ve heard in a long time. There was this one moment, in particular, it was just after a boss fight just outside a cathedral, the response Serious Sam gives… I can’t spoil it, but I literally cheered it was so damn brilliant. If you’re in the market for a fun, first-person shooter, I wholeheartedly recommend Serious Sam 4. It has its flaws and might not be the shooter of the year, but it is still one-hundred percent well worth a playthrough. 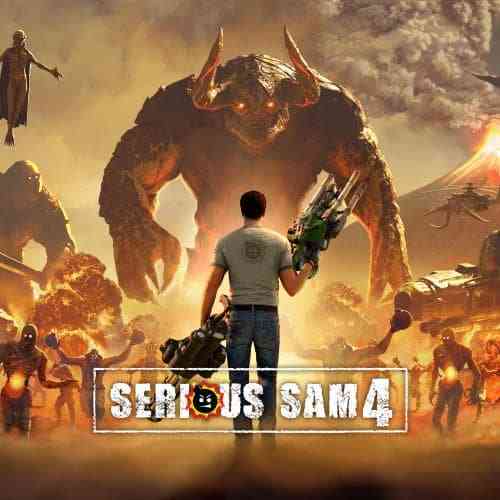 Postal 4: No Regerts Review – Bugs are Only the Beginning
Next Port Royale 4 Review – Yo Ho Ho, and a Brig of Rum
Previous Darksburg Review – A Delightfully Cliche Fantasy Roguelite