Get The Coveted Thanos Avengers Infinity Gauntlet in God of War

Lately, it seems like nothing can stop Sony’s latest exclusive God of War. It’s received critical acclaim from fans and critics alike and it’s been selling extremely well too. Many folks have been finishing up the main campaign, but the journey does not end there. One of God of War’s coolest secrets is that it features the Avengers Infinity Gauntlet and this is certainly something we suggest you work towards after you have done the main campaign.

We should mention, it’s not actually called the “Infinity Gauntlet”, but it is well documented that the “Shattered Gauntlet of Ages” is a nod to Marvel’s Avengers: Infinity War. Considering it is indeed shattered, it takes a considerable amount of effort to put the thing together. However, it is worth the effort as it is easily one of the most coolest and powerful things in the game.

Alright, so how do you get the gauntlet? The first step is snapping up the gauntlet itself. This is accomplished by completing two optional missions in the game. First, you need to complete the “Fafnir’s Storeroom” quest, which is unlocked after one of the key story chapters, “The Sickness.” After completing this quest you need to complete the “Family Business” favor. After you do this, you are awarded the broken gauntlet. 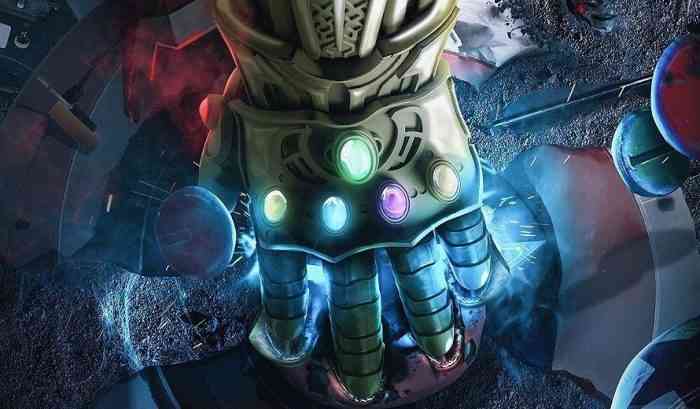 Now that you have the gauntlet, you have to go get all those stones. In other words, you have to equip the Shattered Gauntlet of Ages with three out of six rare enchantments.

The six special enchantments consist of the following:

As we just mentioned, you don’t need all six of them, so don’t sweat it. The three special enchantments that are easiest to get (according to Screen Rant) are Andvari’s Soul, Eye of the Outer Realm, and the Muspelheim of Power. So we suggest just getting those ones. In order to install them, you will need to upgrade the gauntlet twice at the dwarves.

This may sound easy, but it’s not. It is actually an expensive process. In total, the upgrades will cost you 145,000 hacksilver, five dragon tears, and 33 dust of realms.

The hacksilver and dust of realms (the reward players get for closing off Realm Tears) are easy enough to obtain, but the five dragon tears are scattered throughout the in-game world. The first is gained automatically by completing the “Inside the Mountain” story mission. Three additional ones are tied to the following side quests where you’ll need to free dragons: “Otr’s Imprisonment,” “The Fight of Fafnir,” and “The Fire of Reginn.” Finally, players can get the final Dragon Tear by going to the top of the Forgotten Caverns after they complete the main story.

Happy hunting and good luck! Let us know in the comments if you managed to secure the gauntlet.


God of War: Ragnarok May be Coming to PS4

Unbelievable List of Games Heavily Discounted on PlayStation Store
Next
PlayStation CEO: PS4 Is In the ‘Final Phase’ of Its Life Cycle
Previous
First Look at Zachary Levi as Shazam!