Well, we’ve arrived at the climactic episode of Batman: The Enemy Within, and after forcing us to make so many tough moral choices thus far in episodes 1 to 4, “Same Stitch” is all about consequences.  The second season of Telltale’s original take on the Caped Crusader ends with a strong narrative bang that will finally pull back the curtain on Gotham’s secrets – and the results of your personal juggling act with its morally-challenged characters.

Do the ends justify the means? “Same Stitch” poses this question explicitly a few times in the version I played (more on that later), but Telltale’s Batman has struggled with this conundrum going back to the first season, when Bruce Wayne “used” the friendship of pre-Joker John Doe to escape from Arkham Asylum. But it was a question only subtly alluded to back then, and the only hint we got of the resulting sticky moral dilemma was a sly grin from Doe and a vow to see Batman again some day.

Now that some day has arrived. John Doe is now The Joker – with the green hair and strange makeup and everything. Which Joker he has become is up to you, as Telltale has apparently crafted the final episode to be very different depending on what choices you have made up to now. If he’s the Vigilante Joker (which I got), he’s like a lot of other characters from Batman: The Enemy Within – on an earnest crusade to rid Gotham from evil.

“Telltale has apparently crafted the final episode to be very different depending on what choices you have made up to now.”

This Joker does an excellent job of complicating our view of the archetypal “bad guy” we’ve come to know from comics; and he makes a pretty good case that, what with his gadgets and his costume, he’s really no different from Batman. And as this episode clearly shows us, he’s actually less of a villain than Waller and The Agency. As a player, I had a hard time disagreeing with him, and that made it all the more difficult to oppose him when I disagreed with his methods. 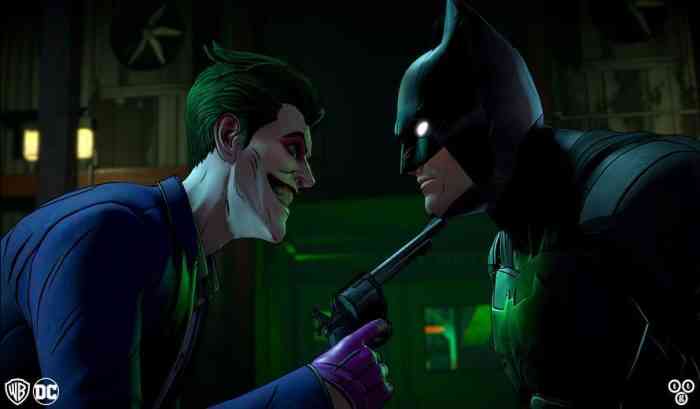 But if you played the season differently from me, you might see a completely different Joker: the Villain. I loaded an alternate save game, where I had treated John Doe as an adversary throughout the season, and got to witness this very different alter-ego of a John Doe who has lost all humanity. This Joker looks more wild, has a maniacal laugh, and does some pretty horrifying things in Episode 5. There is no moral ambiguity in this ending; John Doe is dead – long live The Joker. You might not have as many tough choices to make here, but there is lots of opportunity to play the hero and fight The Joker’s threat to Gotham.

The two branches offer very different scenes, and you have to give Telltale credit. They are famous for boasting that their games are “tailored by how you play,” but I haven’t always been sure, in past series, how true that line really was. But in Batman: The Enemy Within your choices in all the episodes clearly matter, and leave you with much different themes to think about. The narrative elements have generally been strong this season, and Episode 5 finishes the story off brilliantly.

“If you play games for a great story, Batman: The Enemy Within has delivered.”

Batman: The Enemy Within has offered much less in the areas of puzzle solving and detective work than the previous season, and the last episode drops them altogether, offering absolutely zilch. I am not sure why Telltale has decided to leave these interactive aspects out this season – maybe time and resource constraints forced their hand behind the scenes. But comparing this season to the first, the difference is dramatic, and from my perspective as a player, the lack of gameplay depth has been a major weakness of The Enemy Within.

In fairness, though, “Same Stitch” does make up for that shortcoming somewhat with lots of exciting action sequences. Whichever ending you see, you’ll be engaging in fast-paced combat which will keep you on your toes and with your hands close to your keyboard or controller. These parts make this episode satisfyingly interactive in ways that stand out from most of the episodes this season. There may not be puzzles to solve but there is certainly lots to keep you involved.

If you play games for a great story, Batman: The Enemy Within has delivered. Full of complicated, interesting characters, a layered and well-crafted plot, and excellent production quality, this season’s narrative was consistently engaging and ended on a particularly strong note. However, in the gameplay department, it has been a disappointment. I wanted to “be Batman,” to use his Bat Tech, scope out crime scenes, and solve puzzles laid by my enemies as much as in the first season if not more; instead, I was usually just watching Batman for most of The Enemy Within, despite some pretty fun fight sequences. I like Telltale’s version of the Dark Knight and I want to see more … and do more.


Two New Trailers Emerge for Batman: The Enemy Within

Batman: The Enemy Within Episode 2 The Pact Review – Bane and Suffering
Next Q.U.B.E. 2 Review – Challenging And Solid S.E.Q.U.E.L.
Previous The Alliance Alive Review – Charming and Complicated