Batman: The Enemy Within Episode 2 The Pact Review – Bane and Suffering

Batman: The Enemy Within Episode 2 – The Pact Review

In Episode 1 of Batman: The Enemy Within, the mercurial Riddler strutted his ultra-violent hour upon the stage, only to be unceremoniously snuffed-out by a mysterious blow-dart to the neck. Episode 2, The Pact, picks up the narrative as Batman must now search for the unknown villain behind the assassination. Intriguing new antagonists Bane, Mr. Freeze and Harley Quinn bring plenty of narrative sound and fury to the second installment of the series, but a continued lack of gameplay once again lets the solid writing down.

It is now becoming clear that something nefarious is afoot in Gotham – something much bigger than The Riddler or any single villain. Batman/Bruce Wayne sets out in The Pact to delve deeper into the apparent conspiracy, and to do that he (and you) will need to make some very tough moral choices. First of all, there’s Federal agent Waller, who knows Batman’s identity. She promises to keep it secret but at the price of complete loyalty from here on in. That means betraying your good friend Gordon – right from the get-go, Episode 2 made me ponder hard about which path I wanted this journey to take, and I generally enjoyed that. I chose to ally with Waller but I felt uneasy about it, knowing it could really come back to impact the story later, for better or worse.

“Telltale’s writers show again in Episode 2 that they are masters at creating complex, fascinating characters.”

The theme of choices continues as Bruce Wayne/Batman decides he must infiltrate Gotham’s shadowy underworld to learn more about whatever is happening. He contacts his old “friend” John Doe (The Joker), whose associates Harley Quinn, Mr. Freeze and Bane seem to be behind the Riddler’s demise. The Bruce Wayne/John Doe dynamic becomes a core aspect of Episode 2, as you must carefully balance your supposed friendship with Doe while still keeping your moral values intact. Telltale does a great job of placing you in tough situations – do you brutally beat an innocent person up to impress Doe and Harley Quinn? Will you supply them with equipment to commit their crimes? Episode 2 constantly confronted me with uncomfortable moral dilemmas, and I found this element of choice engaging throughout.

Another big theme in Batman: The Enemy Within so far has been the idea of moral ambiguity – no character in the series is truly “evil” or “good.” John Doe, not yet The Joker he will presumably become later, continues to genuinely seek Bruce Wayne’s friendship, and his loyalty to Bruce and his puppy-dog love for Harley in Episode 2 are touching – twisted, but touching. Even Bane, Mr. Freeze and Harley, while they are certainly “villains,” show moments of surprising depth and humanity in your interactions with them. This episode’s title, The Pact, sums up well the various alliances you must make as Bruce Wayne – all the while wondering just how different you are from the “bad guys” you are dealing with. Telltale’s writers show again in Episode 2 that they are masters at creating complex, fascinating characters. 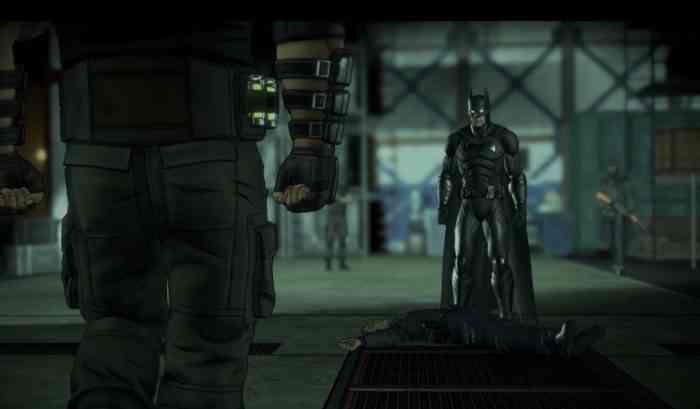 Just as Episode 1 – The Enigma –  was the set-up to a story, The Pact is not a complete narrative but only one middle portion. With Bruce’s help, Bane, Harley, Mr. Freeze and John Doe get ahold of a crate that contains the body of The Riddler. What they have planned next is left for future episodes. But Bruce has accomplished quite a feat – he’s become an accepted member of the villainous team, and has a front-row seat to learn what all of this is leading to for the citizens of Gotham. Episode 2 sets up some nice plot threads for the future – not least of which is Bruce’s relationship with John Doe/The Joker. It’s pretty clear that you will have to turn on him eventually, and given Doe’s earnestness in wanting to be Bruce’s friend, that will not be easy to do.

While the narrative elements and character development are once again superb for Episode 2, the gameplay, again, simply does not hold up its end. In fact, I think The Pact is even weaker in this area than the first Episode. There are no puzzles to solve, unless you count a very short and straightforward defusing sequence, or the time when you have to scan for partial fingerprints, which just involves moving around and pressing the ‘A’ button a few times. There is no use of the Bat-Tech gadgetry, and no real research done back at the Bat Cave. Batman: The Enemy Within continues to disappoint in the gameplay department, and while the writing is great, there simply must be more for the player to do besides choose responses in conversations. Let’s hope that future installments improve on this aspect.

Overall, Batman: The Enemy Within Episode 2 – The Pact moves the series’ story forward nicely, confronting players with interesting, serious moral dilemmas. Well-rounded, complex characters continue to be added to the mix, providing the potential for an excellent narrative conclusion. Unfortunately, a lack of player involvement once again hurts the experience, and Episode 2 actually takes a further step backward in this area with virtually no puzzles or problem-solving elements.  Regardless, as Bruce continues down the path into Gotham’s dark side, I am still happy to be on board to take that crazy ride along with him.