Batman: The Enemy Within Episode 1 Review – Riddle Me This

Batman: The Enemy Within Episode 1 Review

Telltale Games took on a big franchise when they brought their trademark narrative-driven style to the world of Batman. And they were mostly successful, weathering mediocre early reviews to finish on a strong note in Season 1. Now, they’re back for another series with Batman: The Enemy Within. Much like the pattern last season, Episode 1 offers a solid start to the story, but with gameplay that feels lacking at times.

In The Enemy Within Episode 1 Batman, fresh off his defeat of Lady Arkham, now finds himself Gotham’s go-to crime fighter, working closely with his good buddy Gordon. Episode 1 opens as they both deal with the city’s latest threat – The Riddler. In keeping with the tone of recent Batman properties, especially Rocksteady’s games, Telltale’s Gotham is a dark place and not for the squeamish, as immediately seen when Riddler blithely slices off his hostage’s fingers while giggling like a schoolboy. This is not the campy Adam West or Superfriends Batman that some might remember.

“Expect big narrative twists and repercussions for your actions and choices…”

While you work to bring down The Riddler, it also becomes clear in Episode 1 that The Enemy Within will have more emphasis on relationship-building through very tough player choices and actions. A new Federal Agent, Waller, is introduced, and her brash and combative stance makes it clear from the get-go that what you say and do with her will make you or break you this season. I found it very difficult to balance my loyalty and friendship to Gordon with the necessity of not pissing off Waller and making myself one very powerful enemy. 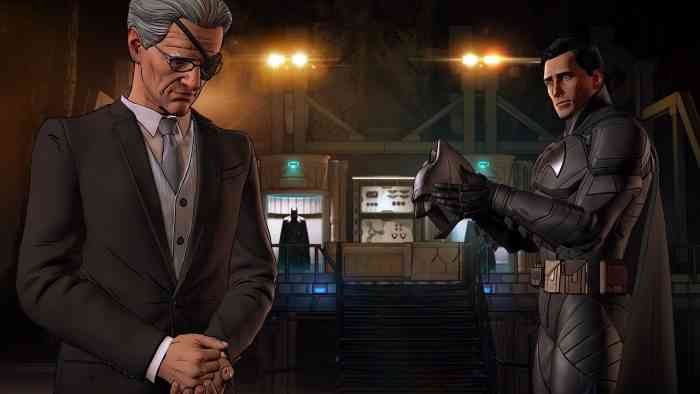 Expect big narrative twists and repercussions for your actions and choices as well. I won’t spoil anything, but let’s just say that in The Enemy Within no secondary character is safe, and what you decide to do or say can alter the story a lot. And every relationship is being shaped by you as you interact with people – I sensed, for example, that my conversations with John Doe (The Joker) would come back in a big way later in the story arc, and the game makes it pretty clear by the end of Episode 1 that he will be Batman’s real nemesis this season. In case you wonder just how your relationships are affected, Telltale has added a new summary at the end of each episode. So, I was able to see that Gordon was left “Steadfast” in his loyalty to me after what I said and did in the opening installment.

Narratively, The Enemy Within’s first episode is solid, and Telltale shows its usual expertise in creating a cinematic atmosphere with good music, snappy pacing and excellent dialogue. Voice acting is, like last season, a strong point, and I will take Troy Baker’s Batman over the unpleasant sandpaper-scrape of Christian Bale any day. Once again, the cel-shaded visual style fits perfectly with the graphic-novel source material, and technically I experienced no bugs or hiccups – an improvement over last time – although I was once offered only a keyboard-based button option in a QTE event even though I was using a controller. 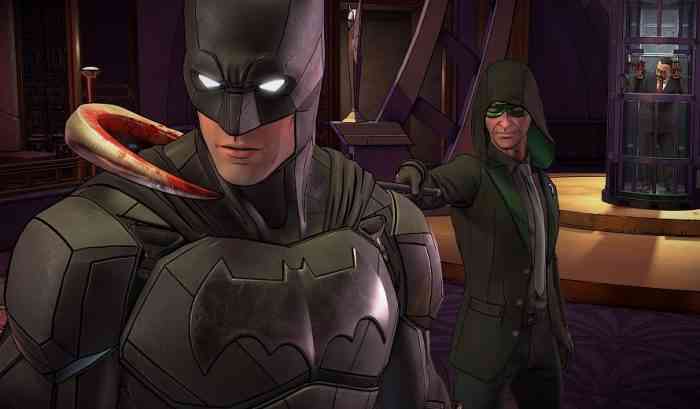 Where The Enemy Within fails, if Episode 1 is any indication, is in its puzzle elements. Like last season, some puzzles are included utilizing the Bat-Tech gadgetry. You may have to scan an area or put clues together at a crime scene. While these elements are a good idea, they are still just too simple and easy. Putting together clues is really just a matter of joining a few obvious items together with your controller, and with so few possible combinations, any player could solve them by random trial and error pretty quickly. Telltale has shown with earlier games like Back to the Future that they can make real puzzles, and I’d like to see The Enemy Within challenge players’ minds a bit more.

“I’d like to see The Enemy Within challenge players’ minds a bit more.”

Batman: The Enemy Within gives players a solid start to this season’s story, with Telltale’s usual solid writing and cinematic flair. The coming confrontation with The Joker is a story arc I look forward to playing out. What I found lacking in this opening episode, though, was the gameplay. Despite Telltale’s usual quick time actions, too few instances of interactivity make this still more of a passive experience than I was hoping for. And, most disappointingly, I didn’t really see a huge leap forward this season in the puzzle-solving. Telltale has a great opportunity with its source material to offer players a deeper crime-solving experience, and that opportunity is so far being wasted somewhat. Let’s hope that the next four episodes address this shortcoming.

PS Plus Free Games Are Available Now: Get Deus Ex & Batman
Next Cat Quest Review – A Purrfectly Pawsome 2D Epic RPG Experience
Previous Fate/Extella: The Umbral Star Review – Great Game If the Characters Would Shut up for a Minute