Just as the second season of Telltale’s Batman: The Enemy Within series was starting to settle down and focus on one main thread – Batman/Bruce Wayne’s undercover infiltration of The Pact – we get a new wrinkle thrown in with the return of Selina Kyle, aka Catwoman. Already juggling a plethora of tenuous relationships with the likes of John Doe/Joker, Harley Quinn, Waller, Gordon, Tiffany and even a few minor Pact criminals, Bruce Wayne faces a new Frenemy in Catwoman – but their flirtatious dance in Fractured Mask makes this one of the more enjoyable episodes thus far.

So far, Batman: The Enemy Within has felt like an exercise in cold Machiavellian diplomacy, as you practice Realpolitik strategy to manipulate John, Harley, Waller and whomever else you have to in order to accomplish your long-term goals. Despite some mild moral quandaries, like the guilt of taking advantage of the genuinely-friendly overtures of John, I have never had any doubts that such misgivings will stop me from eventually betraying any of them in the end if I have to.

But with Catwoman, it feels different. Here is someone who Bruce seems to have genuine feelings for, and despite her tough exterior, the affection goes both ways. In one of the most momentous choices yet, Episode has you decide if you want to open up and trust her, drop your guard, and potentially open yourself up to damaging betrayal later on. I chose to take the plunge and trust her, bring her into the Batcave, and work with her. Like Batman himself, I did so knowing damn well that, personal feelings or not, Selina Kyle will always put her own agenda first, and I/Batman might very well pay dearly for this one later.

“[Batman and Catwoman’s] flirtatious dance in Fractured Mask makes this one of the more enjoyable episodes thus far.”

As for the story, Bruce Wayne continues in this Episode to work undercover with The Pact, trying to figure out what they’re planning. In a call-back to the first episode, he returns to Riddler’s workshop lair, where you are given your only puzzle to be solved. I have complained about the easy and simplistic puzzles in the series so far, and this one is perhaps the worst of them yet. Riddler literally tells you straight out what to do, and no thinking is required to finish and move on. What I found particularly egregious about this poor puzzle is that it actually undermines the narrative. Here is Riddler, a criminal genius, a villain who is built on the idea of brain-teasers. For him to supposedly devise such a childishly-easy challenge for Batman to solve isn’t just disappointing, it’s downright contradictory. 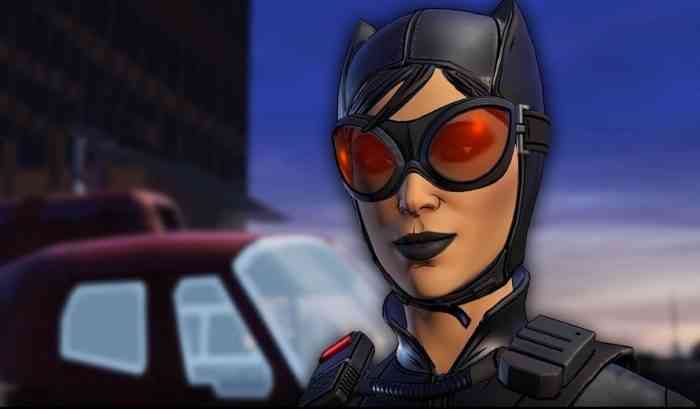 After you finish at Riddler’s lair, that’s it for puzzles in Fractured Mask, unless you count a scene later in which you have to use a thermal imager. If Telltale intended this season to challenge players more, so far I am just not seeing it. In fact, gameplay in general for this season of Batman sees its lowest point so far in Episode 3, despite one extended fight sequence of quick-time button pressing. So far this season of the series has played more like a visual novel than I would like, and things don’t look like they’re going to change any time soon.

As Catwoman reveals to Bruce, Riddler was a bit more complicated than the evildoer we thought we knew in Episode 1, and she plans on getting revenge for her friend. Just what he was doing and why now becomes a focus of Bruce’s quest, as he works to obtain Riddler’s laptop to get some answers. More complications come at you in the form of Gordon, whose relationship with Bruce has been seriously damaged at this point by Bruce’s coziness with Waller. Maybe most seriously, Harley starts to doubt Bruce’s loyalty and let’s just say things get “icy” between them by the end of the episode.

“Overall, in Fractured Mask, Batman: The Enemy Within continues to do what it has always done best…”

To be honest, this season has thrown so many threads and twists at me that I am almost losing track, but thankfully managing the relationships continues to be interesting and keeps me wanting to play more. John’s endearing affection for Bruce continues to make him one of the game’s best characters, and I sincerely hope that I don’t have to break his heart – although I know I likely will. And the rift with Gordon is a genuinely tough moment to take, and is something I hope to mend by the series’ conclusion. One way or another, it seems that the end of this story will leave more than a few good people getting hurt, no matter what I choose, and that has been the game’s strength since the beginning.

Overall, in Fractured Mask, Batman: The Enemy Within continues to do what it has always done best – deliver a well-crafted narrative, fascinating characters, and heart-rending personal choices. And now, the return of Catwoman has added an emotional wrinkle that I can’t wait to see through to conclusion. Sadly, too much of the game’s experience continues to be a passive ride, lacking in gameplay and challenge. But as they say, what a ride it is.