What kind of games prove to be the big hits? Open world for sure. Add some high-speed driving, violence, a heavy soundtrack. Making a game with all of these qualities sounds like it should be a decent hit at least; what could go wrong? Developed by Team6 Game Studios, Road Rage sounds like the perfect dream for those who love chaos and carnage: a city of corrupt law, overrun by gangs and violence. Motorcycle mayhem ensues with weapons at the ready in a turf war to come out on top. The trailers do a great job of making this look like an absolute blast – which is a trailer’s job, to make you want the game. The sad truth, however, is that Road Rage might instill rage in the player, but not in the way it intends.

Ignoring the fact the graphics simply don’t make effective use of the power of current-gen consoles, rather feeling like something from early last gen at best, the content that makes up the story is an emotional grind to wade through as you try to cling to anything that isn’t a cliché. The entire story is presented through text message conversations that pop up when the player answers their phone – no cutscenes here. The screen is taken over by a severely spider-web cracked cell phone to display the conversation at hand which is rife with weak exposition and overused clichés to make it feel like a C-list movie, yet still feels incoherent. None of it really makes sense and each interaction feels like you walked in on a conversation. Should the player ignore their phone they are immediately called back again within five seconds, and this will continue until you answer the phone. What’s more; the game has ridiculous time jumps between these text message conversations while you clearly see the player on screen in the background as if nothing has happened. Months will pass in the story with no reason for me to believe anything more than minutes have passed.

“I could be driving on a straight road with no obstructions and I would simply fall through the earth.”

Road Rage offers customization in the form of buying new bikes, changing a few parts and colors, upgrading said bikes, changing your rider, and your weapon of choice. Motorcycle combat is the only saving grace for the game, albeit the mechanic decides when it wants to work. Hitting the button prompt to attack will automatically close the gap between you and the next biker so you can get in position to hit them, which is pretty satisfying. Hitting pedestrians is also satisfying as they ragdoll in the weirdest possible ways. Missions and Side Missions require a specific bike with a specific number of upgrades to be completed, however bringing up the menu to make any changes will automatically reset you to your previous mission-based respawn point. This means if you finish a mission and end up in one district, then drive four districts away to discover you need a specific bike, then making that change will send you all the way back to the initial respawn point. 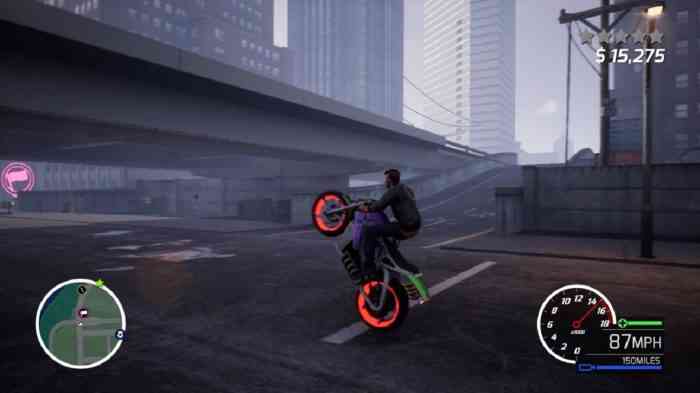 Not only is this a point of frustration, the map itself becomes just as frustrating as you cannot fast travel, set waypoints, nor are things like parks, shortcuts, multi-level surfaces, or any other useful bits of information present on the map. Some sprint-style missions require you to find the fastest route which will require frequent pausing and unpausing just to figure out how to get there. In fact, even completing side missions does not give you any indication of which have been completed: there is no check mark and the icon remains on your map, so you could simply do the same challenge over and over again. Each of these challenges will require specific bikes so – you guessed it – prepare to respawn a lot just for changing a bike.

During several of my races, the game felt broken. I could be driving on a straight road with no obstructions and I would simply fall through the earth and into the abyss. There was also no consistency in my controls as brakes applied once might somehow fail a second time, and the same goes for turning. I could hit the handbrake and crank hard to the left and my bike might lean a little to the left at best; other times it would take the turn hard and fast. Nearly anything can kill you during a race: hitting an object or car makes sense, but more than once my bike would simply fall over and explode while driving at 10mph or slower. What’s worse, Road Rage will make you respawn the way your character was facing after death, meaning if you rolled in any way you could easily respawn facing the wrong direction, and with the map not offering directional guides, it could severely ruin a race for you. The only saving grace is that the other drivers are as terrible as you and will crash frequently.

“Road Rage might incite rage in the gamer, but for all the wrong reasons.”

The final issue I take with the game is its lack of logical function when it comes to the Police and attempting to follow its own story. When the Police are after you I frequently found them doing frantic donuts in the streets. When they would finally try to arrest me they simply ran into me causing a huge explosion, I would respawn – rinse and repeat. I don’t feel like there are any repercussions to my actions considering I can die infinitely. Worse still is the complete lack of logic in the story presented to me. Assassination missions often give you three targets, asking you to kill two in a short time frame. On one such mission I was awoken and told there were four intruders in the area to kill, and so the mission began… however once again there were only three people and I had to kill two targets. Maybe it seems nitpicky, but for a story that I already have no reason to care about, the lack of continuity and consistency just kills my interest in playing it.

Road Rage sounds like a great idea on paper, but when the concept is the most solid part of the entire project, it might be time to go back to the drawing boards on how to proceed. With a game that constantly breaks, unstable controls, a pointless map, flat story, and repetitive rock music riffs for audio, Road Rage might incite rage in the gamer, but for all the wrong reasons. This is a game best reserved for feeling like you need to empty your digital wallet and have no other options. 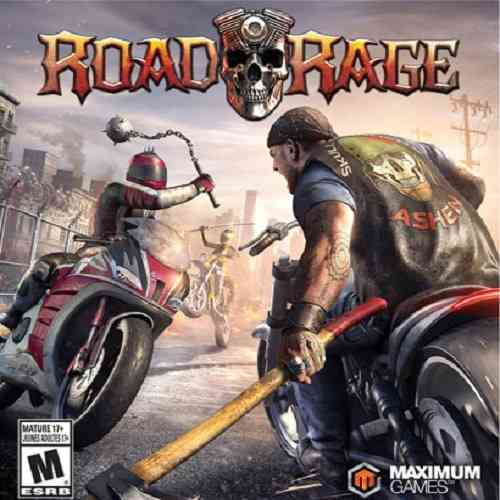