A few years ago, Valve made a big splash when it released Portal, a title that employed a humorous tone to a series of physics puzzles with smashing results. After that, physics puzzlers became a huge thing though very few made much of an impact in the same way Portal had. One of the success stories of the onslaught of post-Portal puzzlers was Q.U.B.E., a block moving puzzle game that required you to use a variety of color-themed blocks to save the world from annihilation. It was successful enough to deem a sequel and Toxic Games have one-upped themselves, creating an even more ambitious, challenging, and most importantly, a fun sequel that everyone can get into in the form of Q.U.B.E. 2.

The premise of the second installment rings a little familiar as almost lone survivor Amelia wakes up in a strange alien craft, not knowing how she’s gotten there. Luckily, another survivor helps her via the radio, navigate this strange world where Amelia’s futuristic suit interacts with the ship in the form of cubes that help her solve puzzles and move towards the core to prevent the destruction of Earth. Both games have made a tongue-in-cheek reference that it makes little to no sense that an alien craft would be designed in such a manner, so let’s just ignore that detail and push forward.

The puzzles are carried out in pretty much the exact same fashion as the previous entry. Enter a room, solve the puzzle, move to the next room. The developers knew better than to simply retread the same formula though, so they dramatically changed up the ways you solve the puzzles. Obviously, each room gets more complicated and difficult to solve, but they also integrate a number of new and continually complex ways to solve the puzzles.

“With mind-bending challenges, an audio treat, and stunning visuals, Q.U.B.E. 2 is a feast for the senses.”

First off, the rooms get hard. Really hard. There were a number of times I simply suspended the game and started watching Netflix so I could come back and reassess with fresh eyes. There were also a couple of times I just stared angrily at the screen, swearing that there was no physical way to complete this puzzle. This was even before I started having to do three or four moves in perfect timing to slide my way to the end. No matter how difficult the rooms became though, you were always so very satisfied with yourself when you solved the puzzle – or annoyed because of how easy the solution was.

Which brings me to the second point. By the end of the first game, you were incorporating a combination of all the moves you had done previously, as you would expect. This is no different for Q.U.B.E.2. This game, though, challenges your reflexes as well as your brain, getting you to time a number of moves and actions to get the desired effect. Click a second too late, you better remember the order you dropped the blocks in. 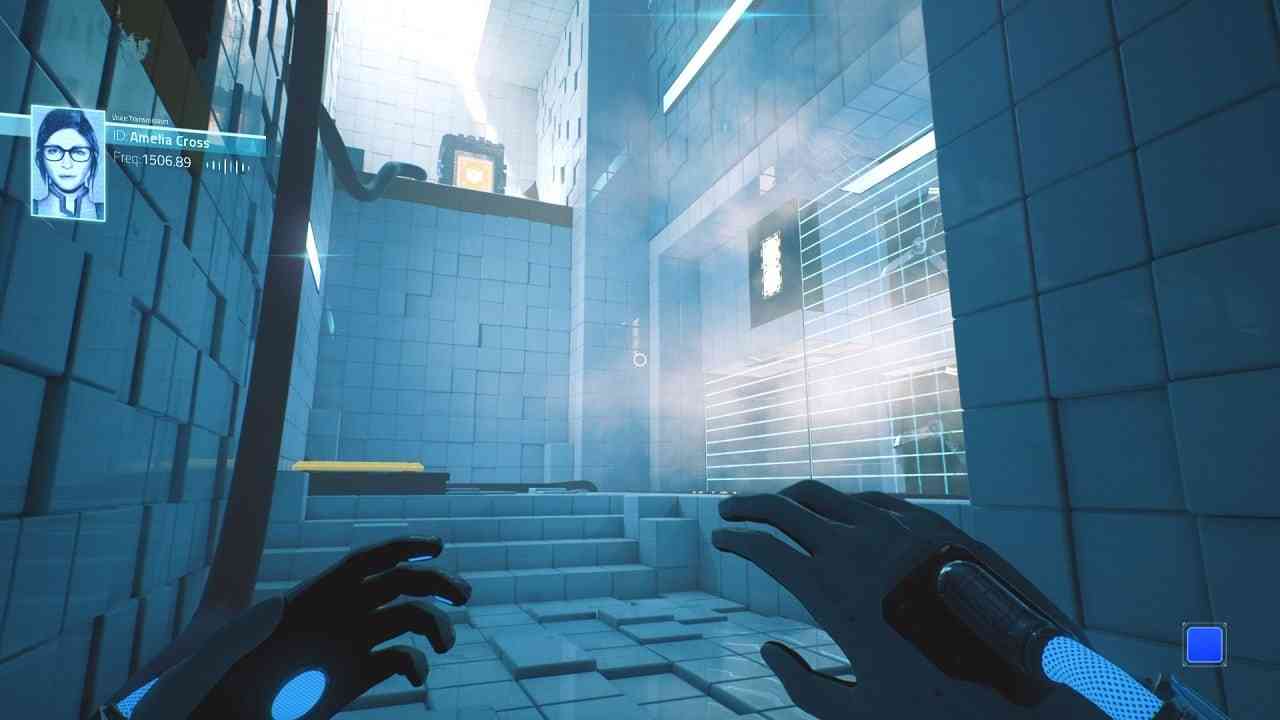 The storyline for the game is ambitiously told, if not a little bit formulaic. You can probably already figure out where the game is going from the brief description I gave but it doesn’t stop it from being an engaging play through. Incorporating mini-goals along the way to your final destination keeps you involved in the plot and the interactions between our two characters keep you wrapped up in their personal plights as well. The sprawling world that you investigate, paired with the unfolding mystery of how and why you’re there, is amplified by the soft, atmospheric music that lingers in the background. It makes you marvel at the discoveries you make, feel tense as you plunge towards the beacon you seek and helps you focus when you’re particularly stuck. The whole game is an experience if only for the short period of time it takes to power through.

Q.U.B.E. 2 may not be the most groundbreaking game you’ve ever played but it is one you are going to want to pick up. With mind-bending challenges, an audio treat, and stunning visuals, Q.U.B.E. 2 is a feast for the senses. The game isn’t terribly long and the story is predictable, but these are minor notes to a game that will keep you locked in. If only so that you can claim that particular trophy and tell your friend that you didn’t need his help anyway, the satisfaction you get from solving these overly challenging puzzles is well worth the value!


Grindstone Launches on PC With a Bright and Gory Accolades Trailer