Titan Quest Review – Still Addictive After All These Years

There was a time between Diablo 2 and 3 when the people’s hunger for Diablo clones was a palpable thing. The field was open for challengers to the ARPG throne. Along came the original Titan Quest. At the time, it was a lungful of fresh air. Between the graphics, the skill trees and the challenge level, it was methadone for the Diablo-deprived. These days, however, the game is more of a pleasant throwback than anything else.

You play a nameless Greek warrior traveling across the land to prevent the Titans from being unleashed. Starting out in the town of Helos, you eventually journey all across the old world in order to accomplish your goal. The narrative runs a little thin, acting as a set of shoestrings to tie all the combat together. Honestly, it’s unlikely you’re here for a sweeping Grecian epic. This is perfectly normal. The combat is a heavy draw, after all.

“Attempting to wrangle the d-pad in combat is a dicey proposition at best.”

This game is not optimized for console play. At least, it didn’t feel that way to me at first. There’s an auto-targeting system, which is excellent, but it doesn’t help you when clicking on items. You can filter out what appears on the ground, but you still can’t choose exactly where your ‘cursor’ ends up. Basic attacks are easy enough to use, while specials are rather unruly. You can assign one special at a time to a face button, the rest are mapped to the d-pad and X. Of course, sometimes you only need to hit the d-pad. This system is fatally clumsy in the heat of battle. I quickly learned to funnel my battle strategy into the two face buttons. Attempting to wrangle the d-pad in combat is a dicey proposition at best. Once you accept this particular limitation, things move a bit more smoothly. 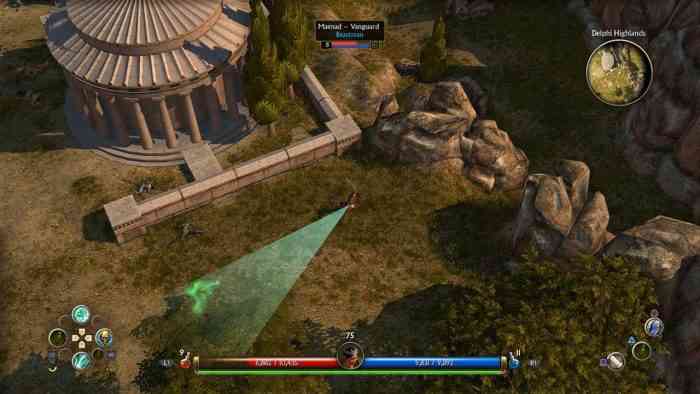 Another small problem I’d forgotten about is the map. This isn’t a console issue as much as a game issue. It’s quite easy to waste a lot of time in this game. I tend to multitask while playing grindy RPGs like Titan Quest. In the case of this game, that’s something of an erroneous strategy. Once in a while, the way forward will be blended in with the rest of the map, and a lack of wayfinder options means you’ve got to be paying attention. Thankfully a little backtracking usually solves this problem, but you don’t always have that kind of time. After wasting an hour looking for a spot I’d missed on the minimap, the rest of my playthrough was relatively straightforward.

All good ARPGs have a rhythm. Once you feel it out, countless hours can be stolen from you. I spent a couple days struggling to catch that groove, but the third night was different. That night, I blinked twice and it was 1 AM. I’d gained several levels. My hero was suddenly festooned with loot. She was being followed everywhere by two wolves and a Lich King. While that first stage is frustrating, the satisfaction in escaping to the groove is always worth it. In fact, one could argue that a slight delay in getting there is preferable to instant gratification.

“While I started out frustrated, every hour I invested in Titan Quest paid off in full.”

If most of your action RPG experience is rooted in blistering titles like Diablo 3 and Path of Exile, Titan Quest may be a serious step back for you. The pacing here is deliberate and slow. On top of that, your level-grinding journey is a bit unforgiving. While you aren’t permanently locked into your skill tree choices, changing your mind is more momentous and expensive than in some modern games. The upside is that there’s a lot of variety in your potential play styles. There’s a great deal of combat strategy to explore, whether you’re into arcane power or sword-and-board brutality. Early on, you’re given access to a second specialization, widening your options even further. It all takes some time to come to fruition, but the grind is worth it. At least it felt that way for me, though my personal history with the genre gives me a slight bias.

In many ways, I’ve been spoiled by Diablo 3. The pace of that game is so breathless, it makes the rest of the genre look plodding by comparison. Yet there’s value in that measured pace. While I started out frustrated, every hour I invested in Titan Quest paid off in full. The joy of watching your ordinary hero turn into a remorseless murder machine, hemorrhaging elemental power in every direction, can’t be overstated. On top of that, I eventually came around on the limited controls, as well. Yes, your options feel restrained. But these limits push you to streamline and perfect your moment-to-moment strategy, foregoing perfection for a sort of relentless utility. Finding the two perfect action skills for my playstyle ended up being its own victory. Maybe my summon-heavy tactics influenced my opinion, but I grew to love this version of Titan Quest. I’m certain I’m going to eventually dump a lot more time into this title when all is said and done.