Smash Ball is the Perfect Blend of Pong, Rocket League and Pinball

PAX Online is here, and with it come a lot of upcoming indie titles from developers all around the world. A lot of these colourful indies are worthy of mention, but Smash Ball may be my favorite of the bunch so far. Smash Ball is like if you limited the field of Rocket League, as well as the team size down to 2v2 and switched the cars for customizable mechs, then added pinball mechanics and the ability to K.O. your opponents. An exhilarating rush may not always come from getting a goal in Smash Ball, it can come from knocking both of your opponents out, landing a crushing blow with one of your booster cards, or successfully chaining goals together in an overwhelming display to your opponents. The gameplay is both fun and addicting, and Smash Ball shows a lot of promise for growth through a likely games as a service model.

The customization potential for the mechs in Game Pill Inc.’s Smash Ball seems limitless already, with cosmetic options also offering increasingly rare variants on your favorite gear. As a hardcore fan of Custom Robo for the GameCube (released in 2004) and the popular anime known as Metabots, I truly appreciate the fact that you can unlock most cosmetic goodies to customize your bots by playing the game. Most of the cosmetics on offer in the Mech Factory are available through playing the game, but there are rarity options that range from uncommon to Legendary, and even Exotics that can be purchased with in-game currency. One day I’d like to see a Gundam, Zoids, or Metabots crossover that brings familiar anime faces to the arena, but for now I like what Game Pill Inc. has included in the base package. 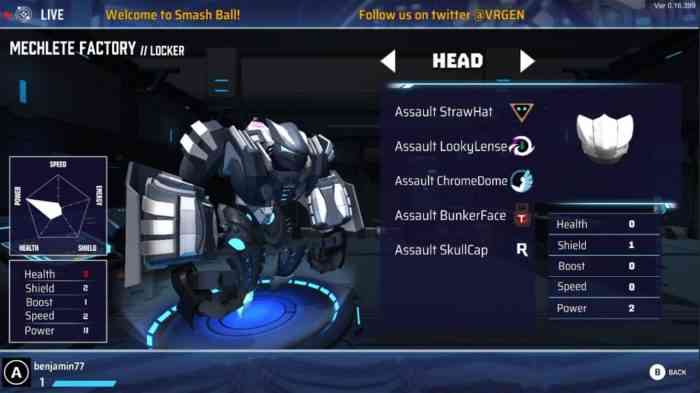 Smash Ball matches can unfold in 1v1 or 2v2 match types, but I personally preferred the strategy of 2v2. In 2v2 you’re able to swap out one bot for another, making it easier to survive a match with a realistic benching mechanic that feels like a no-brainer considering the bots take damage as they’re scored on or hit directly with the ball. There are two ways to K.O. your enemy and be K.O.’d yourself: being hit by the ball directly and being scored on. Thanks to the brilliant combination of Pong and pinball mechanics, it’s possible to angle a shot perfectly to chain together multiple goals, shooting several lightning bolts at the enemy bots. Various booster cards are also used to carry IP the gameplay, allowing gamers to choose one at the beginning of a match. These booster cards vary in effect from missiles, and bombs, to heals and other defensive abilities. This combination of gameplay mechanics ensures that no two matches will feel identical, even when you’re actively trying to reenact a match.

Smash Ball has a fun campaign to play through, with various factions and two entertaining campaign announcers known as Bolt and Screw. The commentary during the matches themselves is pretty weak, but Bolt and Screw come together during brief segments between campaign chapters to show mech game fans their sense of humor. The characters that are showcased through the campaign of Smash Ball truly shine and it makes me just as interested in single-player DLC as I am in the multiplayer potential. Some of the factions that you’re able to join by playing the Smash Ball campaign are Phatbluejay, Quiktank, and Eyeclone, and each of these factions has their own colours as if they’re a sports team. In terms of Smash Ball progression, it’s smarter to use in-game currency to purchase these colour shaders rather than parts that you want, due to the fact that the parts are easily unlocked from winning matches, while colour shaders are a bit harder to come by. 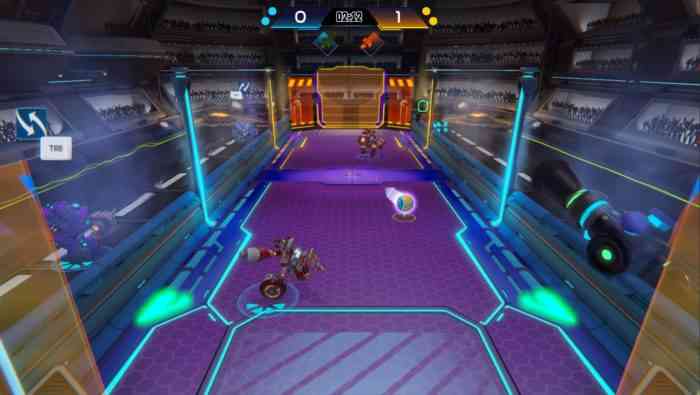 While I played Smash Ball across several days during PAX Online, I was unable to connect to any online matches. I had the opportunity to go 1-on-1 with another friend, but in terms of connecting with randoms online, I have no experience. I expected more people to give Smash Ball a play through PAX 2020, and I definitely anticipate that it will be a sleeper hit when it releases. While it has a lot of room to improve, Smash Ball feels like the early days of Rocket League and it has similar potential. Most of the stages themselves are quite uninspired compared to the Psyonix car soccer title, but the underwater level shows the potential of the arena design.

I encountered a few glitches while playing Smash Ball, with one freezing an enemy bot just before serving the ball, resulting in me only being able to move around or swap players. The other glitch I encountered stopped my enemy from moving, while still allowing them to hit the ball if it got close, which felt like a hidden booster card rather than a game-breaker. I got several hours of fun out of Smash Ball during PAX Online, but I’m even more excited for the future of the game. Smash Ball has no official release date yet, but when it does eventually come out, it’ll be on PS4, PS5, Mobile, and Nintendo Switch. These days most games evolve over time, and Smash Ball shows huge potential. If you’re a fan of Pong, pinball, and/or Rocket League, definitely check out this upcoming indie title! 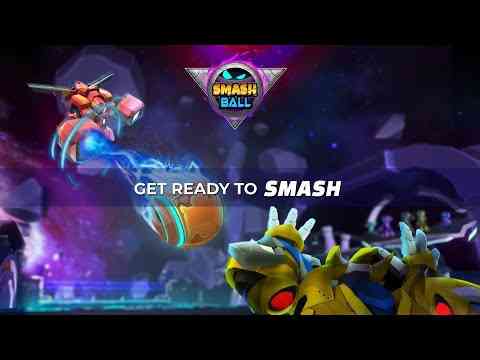 The Second Season of Rocket League Drops Next Week
Next Test Tube Titans is Like a Comedy Version of Rampage
Previous Dungeons and Dragons Inspired ‘Solasta: Crown of the Magister’ is a Beacon for RPG Fans