Star Wars Jedi: Fallen Order will feature lightsaber customization similar to Savi’s Workshop that is part of Star Wars: Galaxy’s Edge in Disneyland, according to producer Kasumi Shishido. During the same interview, writer Megan Fausti revealed that BD-1, the companion robot to the main character Cal Kestis, can even be optionally upgraded to have some fighting abilities. Star Wars Jedi: Fallen Order releases for Xbox One, PS4 and PC on November 15th. 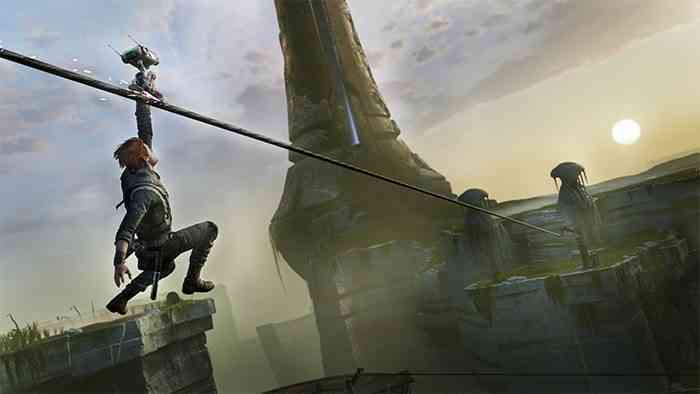 “The lightsaber customization is really fun. We were actually inspired by the new lightsaber workshop at Disneyland,” said Kasumi Shishido. “We have distributed boxes within the game world and they are not randomly distributed. They are for good reasons at their locations and the parts in the boxes are tied to the plot. So the players should be motivated to a return trip.” Apparently, exploration will play a key role in the loot grind for Star Wars Jedi: Fallen Order.

“I would say that everything is very closely linked to the story. The unlocking of a given ability depends on how far the story has progressed. Despite this limitation, there are options for players to choose whether they want to improve their lightsaber or health bar first,” said Kasumi Shishido. “We can not really get rambunctious about how it all works and how each skill is unlocked because it really depends on the story.”

“There’s so much BD-1 can do. Not only is he the companion, but he also heals the player, and like Cal, he also has some abilities to get to specific areas of a level,” said Megan Fausti. “He can optionally learn some fighting mechanics. So he can pretty much do anything that is very exciting.” We’re excited to see just how much the BD-1 can accomplish in the upcoming Respawn action-adventure.

Are you excited for the upcoming Star Wars Jedi: Fallen Order? What colour will you make your lightsaber? Let us know in the comments below!