That’s how you spell lightsaber sounds. Man, I love and hate For Honor events. On one hand, they are super cool. On the other hand, they sometimes come out of nowhere, and are gone as quickly as they came. At the very end of 2018, For Honor did a crossover event with Assassin’s Creed. That spilled over into 2019, so players got a few weeks with it. Last month on April 1st, the minions of For Honor were replaced with Rabbids for a day. Today, on Star Wars Day, the weapons of the For Honor heroes are replaced with the iconic weapon of the Jedi, the lightsaber. 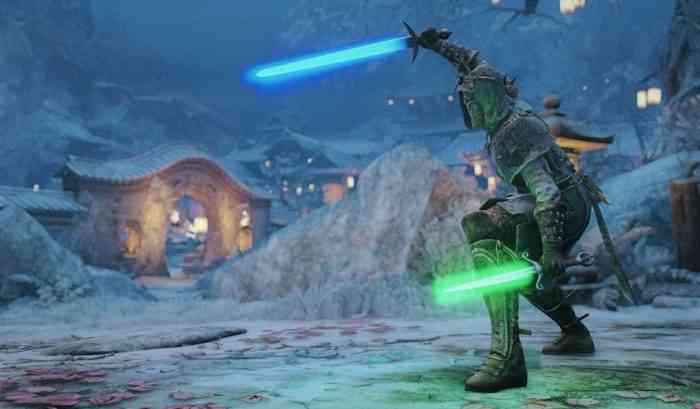 Like an RKO out of nowhere, Ubisoft drops this dope lightsaber event, likely only lasting until the end of the day. But because Ubisoft did not preemptively announce this, we do not actually know how long it will last. All we know is that it’s here and fans love it. Like, absolutely love it. Some are even requesting that it stays, even if they have to pay for it. There is a petition on Reddit to keep the lightsabers as a localized feature. One user even said “This is the first time I’ve ever asked for a thing to be made into a microtransaction.”

Events like this and the Rabbids invasion might benefit from a little publicity. Announcing them a week in advance or extending them by a week could boost player activity. Though For Honor has regular updates and seasonal events, fun little things like this might get missed by a lot of fans since they don’t get much attention, which is unfortunate.

Do you think Ubisoft should advertise these events in advance? Let us know in the comments below.