Now is a time fraught with demos, previews, and announcement trailers. The traditional E3 blitz has been replaced with a protracted trench warfare of gaming news. Every day more trailers and codes slam our feeds. Inboxes everywhere are swollen and bruised. One of those codes was a demo for Gestalt: Steam and Cinder! A little time spent with this game has me convinced of its merits, eager for that eventual release date. This beautiful metroidvania mashup has all the makings of an instant classic without any of the roguelite detritus clinging to its heels. On a side note, can we retire ‘metroidvania’ as term forever? Let’s call them like, MtVs or something.

Gestalt is an MtV (see how much better that feels?) drenched in steampunk aesthetic and old west power. You play a Soldner named Aletheia recently revived from a four week coma. Apparently your last job took a real serious toll on you. The demo starts in medias res, meaning my tenuous grip on the larger narrative is at risk of being super wrong. There are mysteries to unlock and citizens to protect, but the details of the tale are still untold. The demo’s short runtime is less about story, and more about mechanics. I’m here to report that they feel absolutely excellent so far.

A Strong Showing Right Out The Gate

You have items to collect, status points to assign, levels to gain, and upgrades to manage. All that’s unlocked for the demo are the status points and the levels, but they do a great job at sucking you in by themselves. I can already tell that this game is going to hit all the high points for me. Level grinding, item farming, min-maxing, and reams of research are all in my future. The game can’t get here soon enough. 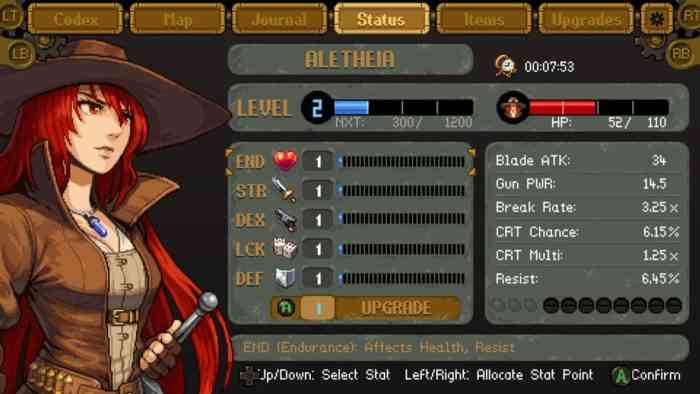 On the other hand, some waiting is to be expected. The graphics and animations are crazy fluid, with every still frame good enough to be enlarged and hung on the wall. Pixel art enthusiasts will be utterly enthralled. Aletheia’s movements are wonderful to watch, to say nothing of the detailed background work. Gestalt feels like a labor of love, every area loaded with little touches and effects. She even takes the time to reload her weapon in a way that’s worth watching.

Speaking of reloads, combat has a rhythm already, a strong beat composed of strikes, shots, dodges, and snap decisions. There’s something innately satisfying about emptying your clip, leaping in with a final strike, and pausing to reload before moving on. Leveling up is so far absent in fanfare, but the act of applying stat points still satisfies. There’s a Soulsborne element to it, rooted in percentages and highlights, that compels you to continue pushing ahead. Every enemy has a set of moves you need to memorize, a pattern to master, and doing so comes with a cost. Thankfully death carries less weight, at least so far, which leaves you more freedom to experiment and learn your moves. Instead, your struggles are saved up and spent on the boss battles.

Much To Master and Memorize

You see only one serious opponent during the demo, but he’s more than enough. A super-powered version of a regular enemy, the game has been training you for this fight. The first time I faced him, my clock was thoroughly cleaned. I’ve beaten the entire demo three times since then, but that initial run was a doozy. Every successive trip through the black market only heightened my anticipation.

There were some bugs to navigate, but this is a pre-alpha build, after all. We’re still in the dark about several crucial systems, but the ones on display are rock solid. So much mechanical and narrative territory remains untouched. I’m enamored enough with the character progression that my faith in the final build has been given a sturdy base. If you’ve got an hour to spare, check out Gestalt: Steam and Cinder. The game will almost certainly sneak into your ‘most anticipated’ list without delay.

***A Steam demo was provided by the publisher*** 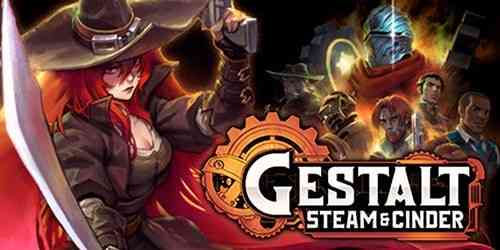 Gestalt: Steam and Cinder’s New Trailer is Breathtaking
Next In ‘Session’ The World Is One Glorious Skate Park
Previous Cris Tales is a Completely Unique, Time-Bending Tale