We know we’ve already covered Gestalt‘s Steam preview as part of PAX Online, but you need to understand, Sold Out and Metamorphosis Games have already released a new trailer. We’re weak, weak people. Even if we’ve already posted something about the game earlier today, we couldn’t not cover it. In short, Gestalt: Steam and Cinder is a Metroidvania taking place in a world of rusting metal, forests of pipes, hanging boilers suspended by oversized chains, and many, many mechanical threats, all lavishly animated in gorgeous pixel art. From character designs that evoke Ayami Kojima’s Castlevania to the detailed hair on protagonist Aletheia’s in-game sprite, Gestalt is a feast for the eyes. In movement and combat, everything is fluidly animated and already exhilarating to watch. Just looking at this new trailer makes my fingers itch to play.

What have we already said about this game? Metroidvania, in-media res approach to storytelling, the protagonist just woke up from a coma, excellent bosses that will kick your ass… ah, here’s something new! This trailer comes with some tidbits of the story–not enough to put together what’s actually going on, of course, but enough to make some educated guesses. Aletheia is a Soldner, which appears to be some manner of bounty hunter or soldier for hire, possible with some supernatural–or at least superhuman–abilities attached, considering the way she bounces back from that whole four-week coma thing. She’ll be running, dashing, leaping, carving, and shooting her way through the enormous, steam-powered city of Canaan, the so-called “last bastion of mankind.”

You know what that means. Shambling mechanical monstrosities to dispatch, conspiracies to unravel, and schemes to thwart. The Comitium, the corrupt overseers of Canaan, have plans that you must get in the way of at any means necessary. Why? It’s simple. Because before long, Aletheia will find herself fighting for humanity’s very survival and unraveling the dark truth behind Canaan’s existence, and the Comitium is opposed to at least of those goals. Which one? Search us. We’ll have to wait and see. 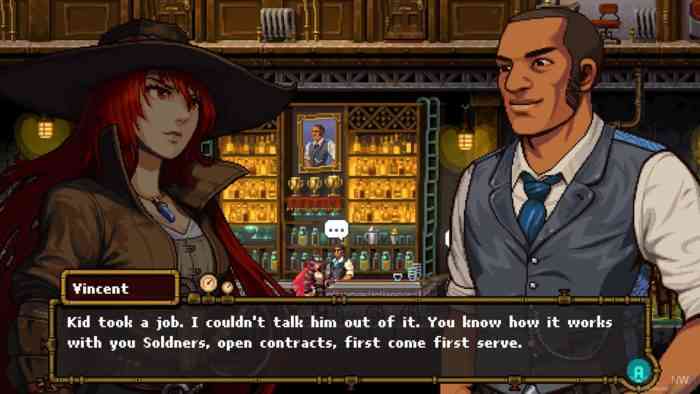 What are your feelings on Steampunk and/or Metroidvanias? Let us know down in the comments, or hit us up on Twitter or Facebook.

Witch It Launches Just in Time for Halloween
Next
Get Free LEGO for Completing Marvel’s Spider-Man
Previous
Crossplay Coming to Watch Dogs: Legion