In ‘Session’ The World Is One Glorious Skate Park

Session Preview – The World Is Your Skate Park

It has been 10 long years since we’ve been able to experience what it’s like to skate, grind and kickflip in the virtual world. Yes, other games have tried to scratch that itch but none have come close to replicating the feeling of pulling off a pop shuvit into a grind. Powersliding its way into the void left by Tony Hawk and Skate is Session, which is currently available in the preview program on the Xbox One.

Session prides itself on authenticity and this is evident with the control scheme. Each analogue stick represents the player’s feet and turning is achieved by pulling the corresponding trigger. Due to this, simple tasks like performing an ollie are quite complicated. At first, you need to crouch down on your back foot, which is different depending on your stance, then push up with the opposite analogue stick at the desired time to spring into the air. Although this is tough to master, the sense of achievement when perfecting a heelflip nosegrind is beyond compare.

With the title still being in the preview stage, the gameplay options are limited. You are given 5 maps to peruse but with the lack of objectives and trick scores, this means your time will be focused more on mastering the mechanics. Elements are being developed and slowly implemented, such as grabs but these are not representative of the final version and can result in some hilarious glitches. In spite of that, what is presented here is a solid premise that can only improve. 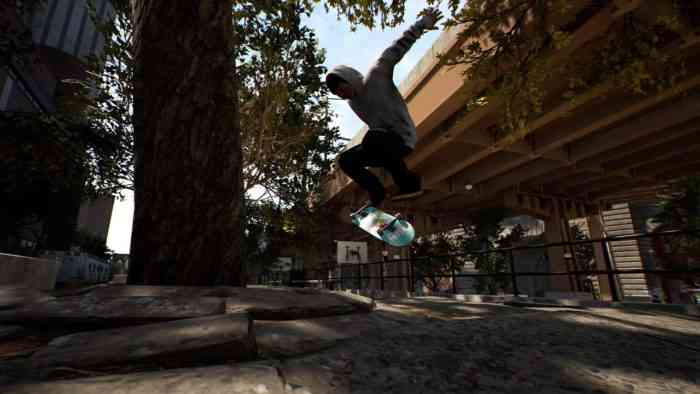 Crea-ture Studios has included a massive range of options to customize your experience with Session, so if you’d prefer the standard Skate style controls, then this can quickly be altered during the game. Due to Session’s steep learning curve, you may want to work your way through the difficulty options in order to refine your skills. By default, the camera will be in the snail’s eye view, which is different from its predecessors. It’s lower and closer, making the action feel intense but not without its flaws. Your vision is hindered and can you make you feel more like Mr Magoo than Rodney Mullen. Luckily, Crea-ture Studios has got you covered and you can alter the camera until your heart is content.

Although the mechanics for the skateboarding itself has been painstakingly designed to replicate the real-life experience, the collision system feels closer to Goat Simulator than a skateboard simulator. If a shallow curb merely looks in your direction, you will fly to the floor faster than Neymar Jr. in the penalty area. Ragdoll physics have been part of the genre since day one, but the extremity of its implementation in Session can make the moment-to-moment gameplay frustrating at times.

Graphically, Session has a high-level of polish considering its position in the development cycle. The characters look the part and can be customized but more importantly, the animation of tricks is smooth and accurate. Each area authentically represents the streets of New York which helps to put you in the mindset of a skater. Mundane paths are no longer an area to commute but an opportunity to grind your way to the next drop, however, if that’s not your thing then you can add items to any location to create a personalized skate park.

Now pause the NOFX track because the Session soundtrack is ill! Although stepping away from the pop-punk tunes of the past, the laid back hip-hop tracks are the perfect backdrop when meandering the streets of NYC. On top of this, the overall sound design is also authentic. The skitting of the wheels across the tarmac and the scraping of the board across the metal poles absorb you in the overall experience.

In its current state, Session is a solid proof of concept. As soon as Crea-ture Studios drops a load of content and fixes a few bugs, this will take it to the next level. With Tony Hawk’s 1+2, Skater XL and Skate 4 on the horizon, it’s an exciting time for skating fans. Will Session bail or stand proudly atop the half-pipe? Only time will tell.