Recently, Microsoft made an announcement that sent shockwaves through the gaming industry. They’re releasing a brand new controller platform for the Xbox One called the Adaptive Controller that is fully customizable with the sole intent of allowing gamers with all types of abilities to enjoy their hobby. It’s an admirable accomplishment and one that deserves immense praise. Microsoft graciously provided COGconnected with the Xbox Adaptive Controller and three additional inputs; a foot pedal, a clicker button, and a one-handed joystick. I’ve spent the last week experimenting with the Adaptive Controller to try and provide some insights and impressions into this amazing device.

Out of the box, the first impression is just how cool the Xbox Adaptive Controller looks. Its dimensions are 292mm (L) x 130mm (W) x 23mm (H) and weighs 552g. It features two USB ports, 19 3.5mm ports, and one 3.5mm stereo headset jack (for audio). Each of the ports has an associated Xbox One controller function. For example, there’s a port for either thumbstick, both triggers, both bumpers, and every other face button. On the face of the Adaptive Controller are two large black buttons, which are by default A and B. Additionally, there is a large D-Pad and the Xbox Menu, View, and Home buttons. Finally, there is a button with three different lights next to it – this is a profile select button as the device allows you to store up to three different profile settings to it. It’s also worth noting that the Xbox Adaptive Controller is wireless and includes a USB cable that you can use to charge the device. There is a power adapter port – but that adapter is sold separately.

Plugging in the Xbox Adaptive Controller to the Xbox One will take you to the Accessories menu. Here you’ll be able to configure the controller as you see fit. Admittedly, this process is not as user-friendly as I would have hoped and I found myself reading a number of different articles on the Xbox site to figure out how to make everything work. First, you’ll pick your profile, which you can rename as needed, and then you’ll see a screen with a visual representation of the Adaptive Controller with links to every button. If you plug in a device to any port, that button name will appear brighter. Clicking the button names will take you to a submenu where you can make some additional adjustments. Some of these adjustments include sensitivity settings and a “shift” setting which allows you to assign two functions to one port, but one function will require you to press the shift button (whichever button you assign the shift key too). One challenge I had was customizing the individual accessories such as the joystick. The joystick has three buttons – but you can’t see to assign specific buttons to them, they automatically assign buttons depending on whether they’re in the right or left USB port.

The last thing you’ll want to configure in the Accessories menu is the co-pilot feature. This genius feature allows a traditional Xbox One controller to be a co-pilot in every circumstance. This feature allows a friend, family member, or whomever to use the Xbox One controller to assist the gamer using the Adaptive Controller. For example, let’s say the gamer had challenges navigating menus, the co-pilot could handle all that and the gamer could focus on the gameplay. Or maybe the gamer only wants to use the joystick to aim and shoot – the co-pilot could handle the movements, reloads, etc. If the gamer can’t handle all a games features with the Adaptive Controller – maybe due to a lack of input device or their own abilities – a co-pilot is a perfect alternative that’ll help the game experience. 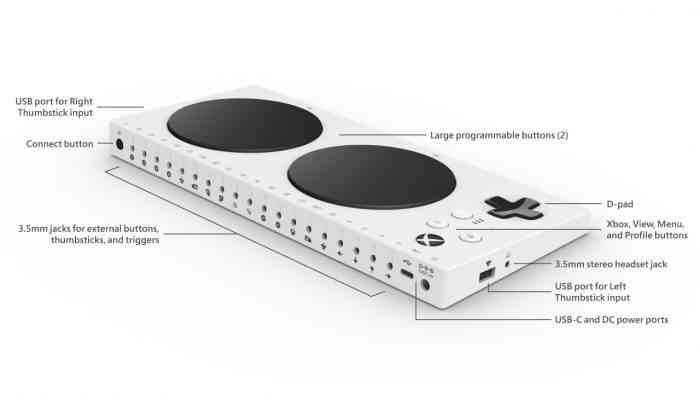 For this piece, I wanted to test a couple different game genres to test the Adaptive Controller’s capabilities. Admittedly, it was challenging – in part due to the lack of input devices needed to fulfill each controller function. The first game I tried was Forza Horizon 3. I assigned the joystick to the left thumbstick for steering and the pedal for gas. This allowed me to drive around, but I couldn’t do much else. Menu navigation and starting races all needed to be done by my “co-pilot”. While I wasn’t able to enjoy the full Forza Horizon experience with just the Adaptive Controller and devices, I was still able to race. In fact, the first race I played I came in 2nd proving that with the right set up, gamers should be able to get quite a bit out of racing games.

The next genre I wanted to tackle was platformers. For this, I tried Super Lucky’s Tale – a decent Xbox One platformer geared primarily to a younger audience but with enough challenge to keep older gamers entertained. For this, I again used the joystick to replace the left thumbstick – this allowed me to move Lucky around. One of the joystick buttons allowed me to do Lucky’s burrow move. Then I used one of the large black buttons on the Adaptive Controller to jump. It still required two hands, but I could navigate pretty well with just this set up. However, I didn’t have a button assigned for Lucky’s spin move or anything to control the camera. Fortunately, in this game, the camera is usually pretty good at providing a decent view without the players need to move it. With a little more adjustments, maybe assigning the floor peddle to handle the spin move, I’m confident I could have successfully played even more levels. 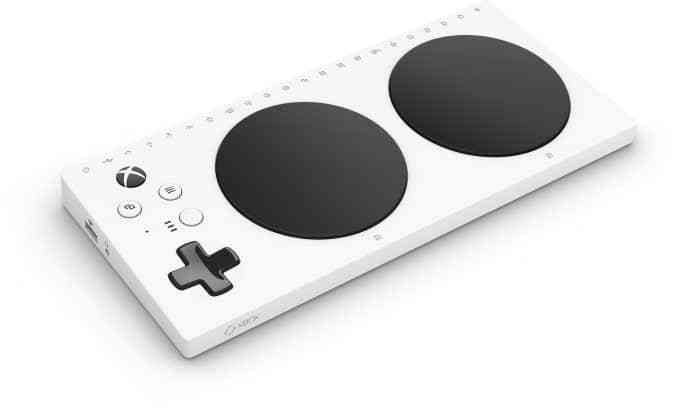 Of course, these are only two of the many, many genres of games available. I imagine some genres will pose more of a challenge than others. I was able to prove that racing games and platformers are doable. First person shooters might be pretty difficult but that’s when you call in a co-pilot. 2D side-scrollers, puzzle games, and RPGs should be pretty easy with just the base unit and a couple attachments. The biggest factor will be the specific capabilities each gamer has and what they’ll need to help them play games. For example, if a gamer can’t press the Xbox One controller’s bumper or trigger buttons, these could easily be assigned to foot pedals. Or maybe the gamer has far more severe challenges and can only manage a couple buttons – a co-pilot will be able to assist with everything leaving the gamer to handle a couple functions.

It’s worth reiterating the fact that Microsoft has unleashed a game changer on the gaming world with the Xbox One Adaptive Controller. This amazing device should be able to assist gamers of all capabilities to get gaming in some capacity. Whether it’s by themselves with the assistance of a number of controller add-ons like the joystick or pedal or whether it’s with the assistance of a helpful co-pilot – the possibilities are almost limitless. Gaming is for everyone, but sometimes games aren’t designed for everyone – the Xbox One Adaptive Controller levels the playing field and helps create new gaming opportunities for everyone.

***The Xbox One Adaptive Controller, three attachments (joystick, pedal, and button), and three Xbox One games were provided by publisher***

20 Awesome Video Games on Sale on Xbox One, PS4, PC and Nintendo Switch
Next Publisher ‘Another Indie’ Has Two New Brilliant Titles I Cannot Wait to Play
Previous Moments Nintendo Left Me Disappointed