4 Things We Love (And Hate) About Amplitude

Long before Harmonix created Guitar Hero and Rock Band, they were known for their work on Frequency and Amplitude. Both were music games that date back to the early 2000’s on the PlayStation 2 and while neither game was a commercial success, they were both critically acclaimed. As the years went on and Harmonix focused their attention on Guitar Hero, Rock Band and Dance Central, there was a constant clamoring for an Amplitude reboot. In 2014, Harmonix started a kickstarter campaign that raised over $800,000.00 to help fund a new Amplitude game for the PS3 and PS4.

Let’s look at the “4 Things I Love and Hate” about the game.

Once you pickup the game and get a hand of the gameplay mechanics, Amplitude immediately sucks you in like Rock Band Blitz. Switching between the tracks, hitting your combos, getting power ups; there’s something super addictive and sexy about playing this game. I always found myself saying one more song, only to find myself still playing an hour later!

Simplistic Controls Make It An Easy Game To Pickup

The game’s main controls are limited to three buttons: R2, R1 and L1. It makes for an easy game to pickup and play for anyone. Even my Wife who is the furthest thing from a gamer was able to pickup this game and figure it out within minutes. It feels less daunting than playing Guitar Hero Live or Rock Band 4 for the first time. 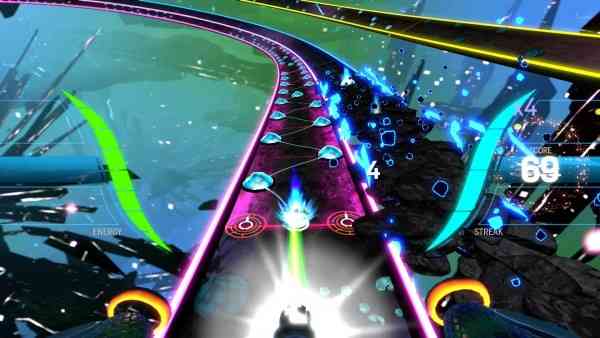 While the game doesn’t have online play, it does feature local play for up to 4 players. Featuring both competitive and cooperative play, Amplitude is a great game to play with friends. It’s disappointing that online play isn’t offered in Amplitude.

The Price is Right

Given how expensive video games have become in this day and age, it’s nice to have a game reasonably priced at $19.99.

DropMix Review – Droppin’ Sick Beats (No Mad Skills Required)
Next Bloodborne: The Old Hunters – Guide to Slaying Lady Maria
Previous 3 Up, 3 Down – The Best (And Worst) Games From December 2015