10 Board Games Perfect for the Family Over The Holidays

The holidays are fast upon us! It’s a time spent with family, eating chocolate, telling stories, and eating more chocolate. A common tradition around this time of year is to break out an old board game, gather around the table, and get lost in some cards. It’s normal to have these nostalgic connections to board games because they often get lumped together with the holidays, but as we all get older we start to realize how many of the games considered “classics” kind of stink.

When people hear “board game,” they often think of Monopoly and assume that is the definition of what board gaming is; a tired, excessive slog of several hours where nobody actually enjoys themselves. If you are one of these people I am happy to tell you: you’re wrong!

Modern board games come in a variety of styles and mechanics with literally thousands of games on the market. The trick is trying to find a new game for the holidays which is easy to learn, easy to play, and that even your grandparents can join in and have a good time without arguing over rent payments, Boardwalk, and going to jail. Here are 10 family board games perfect for the holidays. 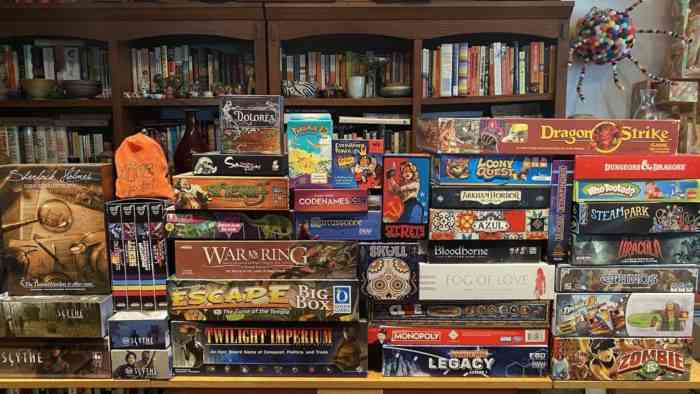 A special note before this list: Monopoly, Catan, Exploding Kittens, or “Impress the Judge” style games like Cards Against Humanity will not appear as these are the most common household games and it’s almost guaranteed someone you know owns at least one of them. If you are looking for more family-friendly games like Cards Against Humanity there is Apples to Apples for young children, or Jeff Foxworthy’s Relative Insanity which is more for Teens and older. Yes, THAT Jeff Foxworthy.

One of the newest games on this list, Happy Little Dinosaurs is a cheeky little card game for 2-4 players from TeeTurtle (the adorable, funny t-shirt people) in which players face off to avoid physical, natural, and emotional disasters. These can include being trampled, having a tree fall on you, or getting a bad haircut. One of these disasters will be in play at a time. Each player simultaneously plays a numbered card on the table; the highest number moves that many spaces on their board, the lowest number takes the disaster. Simple? We’re not done yet!

Many of the numbered cards also have an associated ability to manipulate the numbers played, and any player can play cards from their hand to further mess with them. These can include adding or subtracting points from any player or even forcing two players to swap cards. Collecting one of each type of disaster or three of a kind eliminates you from the game. First to 50 points or last man standing wins. It has a wonderful sense of humor and works quite well as a two-player game which you don’t find often. There is also an expansion that puts the game up to six players wherein all of the disasters added relate to puberty. 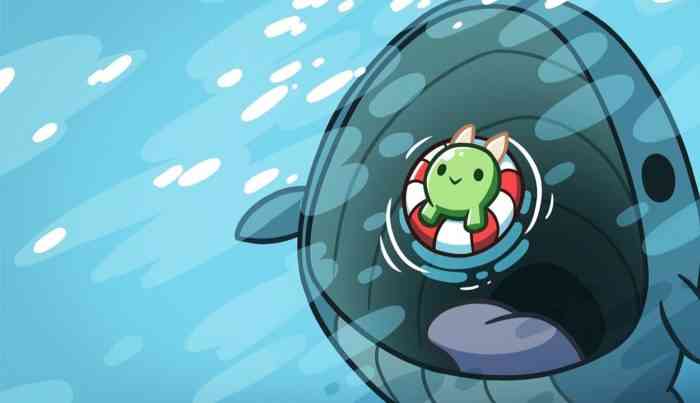 A bit on the nose but rest assured this game was originally published in 2015 and single-handedly changed how co-op board games are produced today. Pandemic is a game for 2-4 players using a board with a map of the world. Four terrible diseases are running rampant simultaneously and it’s up to the players to work together and cure the world. At the start of each round cards are drawn which will spread the diseases to more and more cities, however, a typical round does not involve each player taking their turn, rather all player actions being completed simultaneously. If one person in your group is adept at strategy games, they can step up as the leader to suggest actions, however, nothing is done until everyone agrees on their actions that turn.

This means playing with dear old grandma or the little tyke who just wants to be part of the fun, well now you can advise them on their options and explain how best to work together for the greater good. The game is designed to be difficult and you’ll probably lose several times before getting it right, but winning feels so good when you pull it off. Pandemic is also built so once you eradicate two of the four diseases, the remaining two have probably been running rampant. This makes for fantastic tension right to the last turn. There is a reason this is a new staple of gaming and why so many developers have taken this kind of co-op model to build off of. 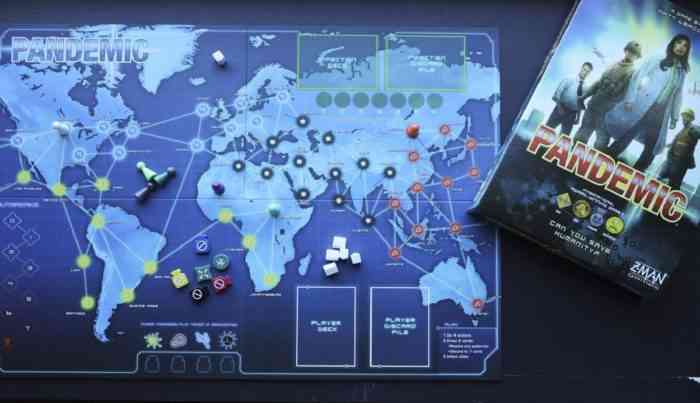 Switching gears to something less intense, Dungeon Mayhem is a simple, lighthearted game for 2-4 players and is based in the Dungeons & Dragons universe. Luckily, you don’t need to know anything at all about D&D and the game is very easy to learn and enjoy. The base game comes with four small decks where each one represents a different character: elf paladin, human sorcerer, tiefling rogue, and half-orc barbarian. Players each have 10 hit points and spend their turns drawing and playing a card to try and murder one another, the last man standing wins.

These cards have very simple iconography on what each card does, and each player gets a cheat sheet to remind them of these actions. Players can heal damage, attack, put up shields, draw an extra card, or use their special ability. Many cards will show up to four icons, meaning players can complete all the actions on said card, and each deck is tailor-made to reflect the character and class it represents. There are two expansion packs for Dungeon Mayhem with one adding two characters from Baldurs Gate and another adding six playable monsters, meaning you can have up to 12 people in an epic battle to the end. The game only lasts around 10-15 minutes but most people are so enthralled with the humorous art and strange powers that players will often swap characters and decks to try new things. 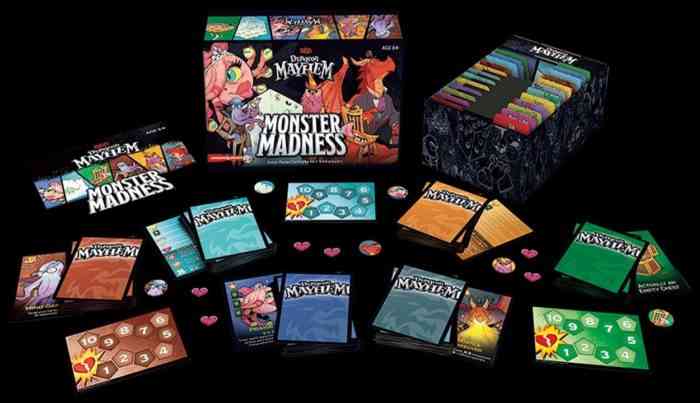 Do you suck at bluffing games? Perfect! A Fake Artist Goes To New York is an entirely different kind of bluffing game for 5-10 players and it is small enough to fit in your pocket. Each player is given a different colored pen and a category is written on every dry erase card but one. These are shuffled and handed out to every player. One piece of paper is put in the center of the group where each person draws a single consecutive line on the page with the objective of everybody working together to draw an image of what was on the card. Do you see where this is going? One person has a blank card and has no idea what everybody is trying to draw, so they must add something to blend in with the rest and hope they aren’t discovered.

Each player will get two chances to add to the drawing before its pens down and the group must look at the image and vote for who they think is the fake artist that didn’t have a clue what they were doing. It’s hilarious and simple, intriguingly limiting with only adding two lines, and the more people who can’t draw the better because it only adds to the confusion. It’s a very easy game to explain to any family member and the final Frankenstein pictures are sure to be worth a laugh as well. 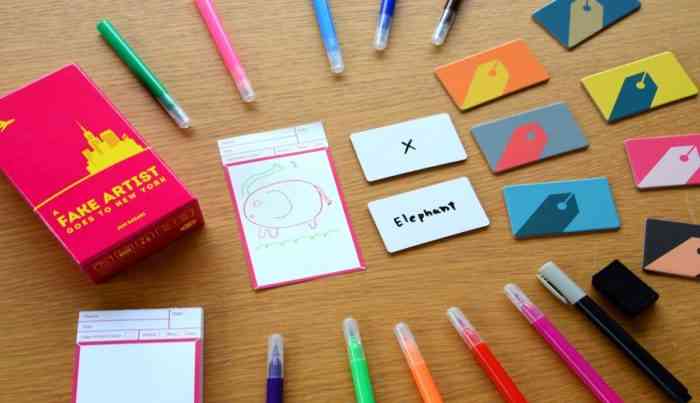 One of the more recognizable Euro games, Carcassonne is a 2-5 player strategy game perfect to play with a cup of tea and some light conversation over the holidays while the little ones bolt around the house to burn off their sugar rush. This is a tile-laying game in which players are building the French countryside. Tiles must be placed with adjoining features eg. Grass to grass, city to city, road to road, etc. When a player puts down a tile they can decide to leave one of their colored wooden meeples on a feature of that specific tile. There are four ways to gain points in this manner: placing a meeple on the road makes them a bandit, in the city is a knight, on a monastery is a priest, and laying the meeple down in the grass is a farmer.

Each one has a different means of earning points, however until that criteria is met, the meeple must stay in place, so it’s always something of a gamble of when and where to place them. As a tile-laying game, Carcassonne lends itself to infinite replayability as the board is always changing. The game also has over a dozen expansion packs, each one adding two to four new mechanics and features which can be used in a variety of combinations. It’s a hearty game to play for half an hour, the artwork is beautiful, and it’s as easy as: place tile, do I want to put a meeple? Does placing this tile complete the task of a currently placed meeple? Next player’s turn. 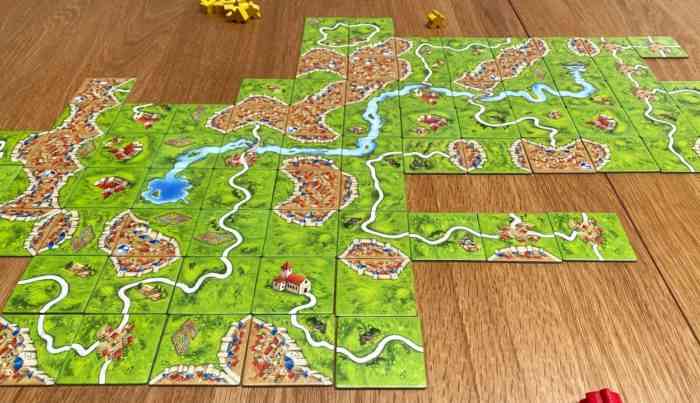 
Eastward Collector’s Edition Comes With Its Own Board Game

Pandemic Board Game Delisted on Steam
Next 5 Times Video Games Went Too Far
Previous Have You Been Naughty or Nice? Gaming Santa is Watching You