During the recent Sony State of Play, Heart Machine unveiled more of their upcoming game, Solar Ash. The vibrantly colourful world of Solar Ash is seen through the eyes of a character named Rei, a Voidrunner who ventures into the unknown in order to save her planet. The game is fully 3D and has an emphasis on swift movement in massive pastel environments. Solar Ash has no official release date but it is expected to launch on PS4, PS5, and PC through the Epic Games Store later this year. 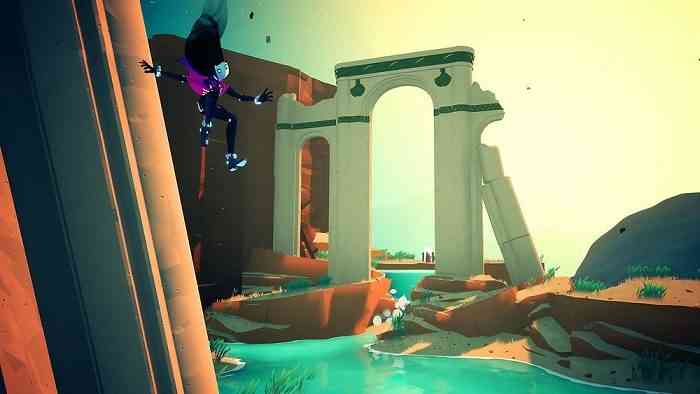 The recent Sony State of Play Solar Ash trailer started with Rei gazing at what appears to be a black hole before swirling into it like water down a drain. Rei is shown skating across most surfaces as she platforms from one colourful environment to another, showing the emphasis on speed in this 3D platformer.

“Hey everyone, I’m Alex Preston, Creative Director at Heart Machine. You might know us as the team behind Hyper Light Drifter. Today I’m here to show you the first peek at gameplay of our new title: Solar Ash. Solar Ash is a huge, stylish 3D platformer focused on speed, movement and fluidity. The game is set inside a giant black hole known as the Ultra Void which is consuming everything in its path. ”

“You play as Rei, a daring Voidrunner who has decided to venture into this terrifying anomaly as a last-ditch effort to save her homeworld. Rei is extremely agile and is able to speed across the world with abilities akin to skating.”

Will you be getting Solar Ash on PlayStation or PC? Let us know in the comments below!

Darkest Dungeon 2 Is Coming to Early Access Next Week
Next
A New Kena: Bridge of Spirits Release Date Trailer Is Up
Previous
Final Fantasy VII Remake: Intergrade Announced at PlayStation State of Play