Platforming is, by design, a rather tricky business. You’re meant to be confounded, to be pushed to your limits at every turn. Every success should come on the heels of agonizing defeat, even if that journey started several games ago. Viewed in this rosy light, Ghostrunner is a landmark victory. Here is a perfect example of repetition and reflexes made musical, a symphony of ability on a throne of relentless exertion. On the other hand, my time with this game was scarred and blistered by frustration.

Some games -most of them, in fact- are not for everyone. Ghostrunner is not for me. Melee combat mixed with high-speed first-person platforming is a smoking concoction, one that’s perfectly toxic to me. I respect the craft on display, but this can’t neutralize my feelings regarding certain mechanics. I recognize my orientation as an uncommon one. I also know that this intense discomfort will color my final judgment. Just know that the balancing act being performed with this review is a delicate one.

Your story is a vertical slice, a tiny window into an enormous cyberpunk dystopia. You play a sort of courier, an operator with a more murderous skillset than the average on-foot messenger. You start with none of your memories (as one does), trusting in a series of benevolent voices to fill in the blanks. The usual themes of extreme corporate greed are buttressed by the real story, told through constant fears of acrobatic athleticism.

Here’s where the gameplay shines, the chewy caramel center known as parkour. You leap, slide, slash, and swing your way through a series of deadly stages, dying repeatedly along the way. At first you might think the amount of checkpoints are excessive. This will quickly pass. To put the difficulty in perspective, I died 107 times on the first stage. While I know that I’m worse than the average 3D platforming enthusiast, there are a few elements to keep in mind. 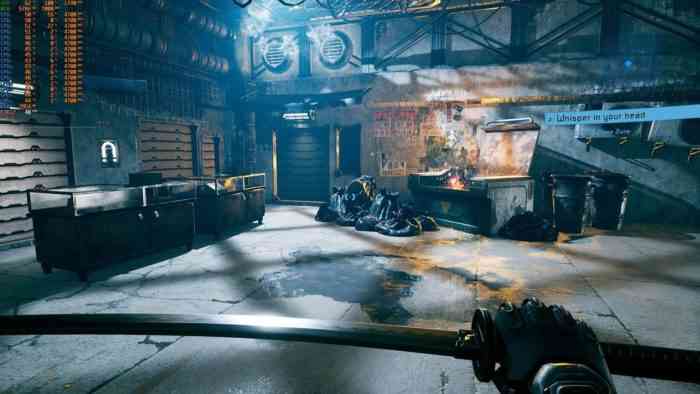 First off is the combat. I’ve always found sword fights in first person to be clumsy affairs, and this is no exception. You’re also a one-hit wonder as far as damage goes, so there’s no room for error. You are also, as far as I can tell, the only person without a gun. Your situation isn’t totally hopeless though, as you can move very fast. The slides and dashes make you a force to be reckoned with, so long as your aim is excellent. This feeds back into the melee combat issue, that inherent clumsiness associated with first-person close quarters combat. Practiced experts at actual FPS games will almost certainly annihilate these obstacles. I, if it wasn’t already obvious, have no skill in those games. I’m almost uniquely unsuited for this particular challenge. Still, I pressed on, grim as the task became. This leads to the trickiest conversation yet, that of the challenge level.

Talking about a game’s difficulty is always overshadowed by this question. What if the reviewer is just really bad at [X] type of game? Well, there’s no question in this case. As I’ve carefully intoned, Ghostrunner’s mechanical core slips through my fingers like chopsticks grabbing Jell-O. And yet, the infrastructure is in place to teach even the clumsiest oaf how to navigate these darkened waters. Rapid repetition is key to success, right? Even so, my progress was torturously slow. Enemy behavior is just varied enough to make bad runs feel like cruel luck. Identical paths are either fatal or not, with no warning as to which you’ll encounter in a given run. Even your own moves seem ready to betray you based on a still-mysterious set of subsystems. Variations in AI behavior, however slight, only put more distance between practice and perfection.

This is the rub, then. Yes it’s possible to scrape together some measure of skill, but it shouldn’t be drudgery. You should love every minute of it, propelled ever forward by the need to perfect your form. My progress in Ghostrunner was reluctant, like dragging a shopping cart up a rocky hill. The game’s mechanical core just repels me, specifically. But I recognize this problem is a personal one. So how is the game, individual biases aside?

Without my suffering-tinted lenses, Ghostrunner is a fast-paced, tough-ass platformer. Every stage is a non-stop barrage of fresh new challenges. Death is around every corner if you ever stop moving. You’ll experience crushing defeat in a host of different ways, but your victories will be all the sweeter. You can choose your path to victory, with multiple routes available through some of the larger stages. On the aesthetic side of things, more or less every stage is drenched in cyberpunk minutiae. The neon, the grime, and the violence lend an electric urgency to your already death-defying exploits. My only warning is this: know what you’re in for first. First-person action platform games aren’t for everyone. Of course, I had to play one to discover this, so who knows! Maybe a new favorite subgenre is waiting in the wings. 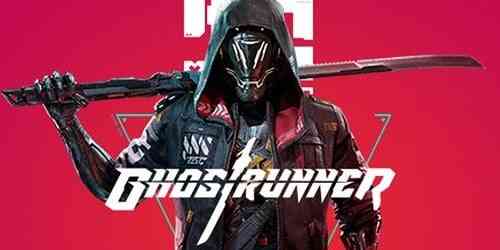