Amnesia: Rebirth is a sequel to Frictional Games’ Amnesia: The Dark Descent. Sandwiched in between these two games was their 2015 game, SOMA, a modern SF tale set in an underwater lab. Dark Descent was a survival horror game where the protagonist was mostly powerless while SOMA was a more heavily narrative driven drama. Amnesia: Rebirth finds itself somewhere between these two games in providing players with a new experience.

Amnesia: Rebirth employs the same first-person viewpoint as its predecessor – The Dark Descent. This time, you play as Tasi Trianon, a French draftswoman on an archaeological expedition in Algiers. One of the members of the expedition is her very own husband, Salim.

Narrative shift aside, Amnesia: Rebirth drips with the expected Frictional Games’ flourishes. While you know that you are playing Tasi from the get-go, she awakens with her memories shattered. The story takes place in the 1930s in Algiers. A few days earlier, the expeditionary plane Tasi and her husband were passengers on crashed in the North African desert near some mountains. Tasi is sick, disoriented, and alone. Outside the plane she finds an abandoned shelter and heads towards the mountains where the rest of the expedition has gone in search of inhabitants and hopefully rescue. She finds a cave entrance, and her real journey of rediscovery begins. Inside the cave, Tasi finds another camp and finds the expedition’s first casualties. She continues onward, frantic to find her husband. But it is dark in the caves… very dark. And in the dark her fears fester and grow. Her fear not only places her sanity in question but feeds the monsters that dwell in the caves.

Best of Both Worlds

The DNA of Frictional Games’ earlier games have been merged into Rebirth. Rebirth straddles the line between horror and internal narrative drama. The game takes you to locations both in and out of the caves, into the mountains, and to locations far beyond the setting of the story. All this is done in a manner that explores Tasi’s psyche. Part of the allure of these type of games rests with the discovery of the story so I’ll refrain from revealing anything further.

Part of the game mechanics is very familiar to Dark Descent. While in the games, light is a limited resource. You are constantly in search of matches or oil to light your lantern as without either, the darkness will press in and Tasi will react violently. Her sanity will falter and the creatures tracking her will move in. At this point, Frictional Games decided that instead of ending the game, it will trigger a respawn. This is done by having Tasi regain consciousness and being able to continue the journey with the monster(s) removed. Doing this reduces some of the tension but allows the player to continue the narrative. This may be a turn-off for some players, but welcome for others. The other primary part of the game mechanics is puzzle solving. Beyond the need to find oil and matches, environmental puzzles return, requiring Tasi to figure out how to either get around locked doors or passages or find out how to open them. These are a staple of the series and they are implemented well. 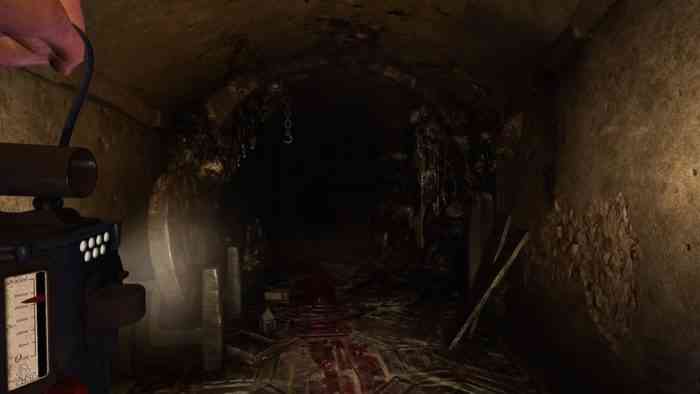 From a production point of view, the game looks and sounds great. Sound, as I continually note, for horror games is super vital and Rebirth is no slouch here, especially when you are in the caves. There is one visual oddity though – blowing sand. It comes in on a distinct plane several inches above the ground that does not quite fit in with the environment. It’s a small thing but I found it very distracting in the way that once you notice something amiss, you can’t ignore it. It must be noted that the voice acting in the game is superb. Hats off to the actors!

On PC, you can play with either mouse and keyboard or joystick. Both have their pluses and minuses. You have greater accuracy with the mouse, but with the joystick, you can use rumble which adds an extra dash of immersion.

Overall, Rebirth is a deeper game than Dark Descent, which had a more visceral impact because it was a new experience and relied much more on jump scares. Still, because the questions being asked of Tasi require more thought from the player, the decisions made linger and their consequences will haunt you long after finishing the game.