Twitter was recently flooded with new details about Pokémon Unite, the upcoming free-to-play Pokémon MOBA coming to Nintendo Switch and mobile devices. Pokemon Unite recently began some private internal testing for the game and some of the testers have apparently leaked information about the game online. This information includes screenshots, general details, and info about the Pokémon included in Pokémon Unite. 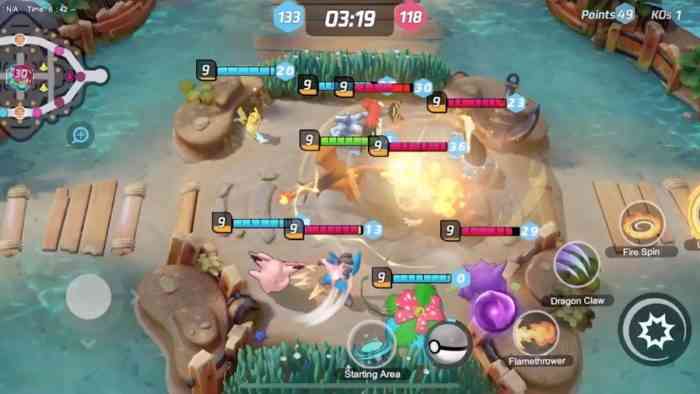 Twitter user Nihilego_Khu was among the Chinese playtesters who leaked Pokémon Unite details on Twitter, including several screenshots, general details, and information about included Pokémon. The Pokémon that have been confirmed for Pokémon Unite so far include Bulbasaur, Squirtle, Jigglypuff, Machop, Slowpoke, Froakie, Fletchling, and Charmander, Pikachu, Snorlax, Lucario, and Zeraora, alongside their evolutions when applicable. Pokémon will begin evolving at level 5, then again at level 7 if it has a third evolution.

During a Pokémon Unite match includes random Pokémon and items that appear on the map and can be battled to earn experience. Some of these wild Pokémon may be Legendary. Pokémon, so exploring the Pokémon Unite map in any given match is encouraged through the gameplay loop. Rare candies and berries can appear on the map at any time and they have various effects. One berry may boost a Pokémon’s abilities, another may heal them, and another gives them special effects.

Pokémon Unite teams are built between five basic roles on the battlefield: Support, Standard, Defense, Speed, and Power. Gamers can mix and match or pick their favorite role and make a team full of their specialized Pokémon. Pokémon learn new moves at levels 1, 3, 5, and 7, then will learn Unite at level 9, and each Pokémon will be either Beginner, Medium, or Master level.

Will you be playing Pokémon Unite when it eventually releases? Let us know in the comments below!