During the recent Mario 35th Anniversary Nintendo Direct, Mario Kart Live: Home Circuit was among the new announcements that shocked the world. The latest Mario Kart game involves real Kart toys, Mario and Luigi have both been confirmed, that are controlled using a Nintendo Switch similar to how remote control cars and drones are controlled. This AR game uses a finish line to map out a course, or multiple finish lines that will create more intricate courses, and they’re all based on your surrounding environment. Mario Kart Live: Home Circuit is launching exclusively for the Nintendo Switch on October 16th. 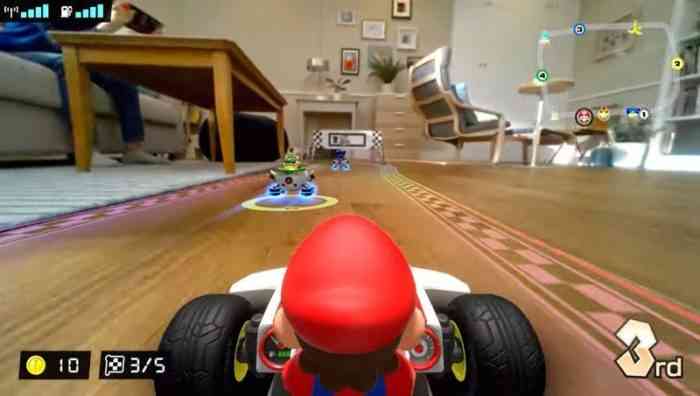 When Mario Kart Live: Home Circuit releases in October, there will be two packages gamers can invest in. People can either get the Mario or the Luigi kart at launch, but it’s likely more racers will eventually be released. Whether you choose Mario, Luigi or both, the kart will come with the game and a finish line to setup somewhere in your house or other safe playing areas. Each bundle will set Nintendo Switch gamers back $99.99, due to the fact that these are no simple karts, but are impressive augmented reality pieces of tech.

Fans of Mario Kart will be pleased to know that Mario Kart Live: Home Circuit offers four-player local multiplayer, as well as customizations and costumes for Mario and Luigi. While there are only two racers to choose between at launch, it’s refreshing to know that gamers will be able to customize them so they can identify their unique kart. The in-game racing also features the Koopalings so they may be releasing as separate kart racers later in Mario Kart Live: Home Circuit’s lifecycle.

Will you be getting Mario Kart Live: Home Circuit for your kids or yourself? Let us know in the comments below!