During Gamescom Opening Night Live, Ratchet & Clank: Rift Apart received an in-depth gameplay reveal, and PlayStation also announced that it will be part of the PS5 launch lineup. The demo video showed off the impressive visuals of next-gen with no stuttering or pop-in issues. The footage was captured on a PS5 and included gameplay from early in the campaign, where Ratchet and Clank appear from a portal and instantly have to combat enemies. Ratchet and Clank is available on the PS4 right now for gamers to catch up with the titular duo before Rift Apart releases later this year. 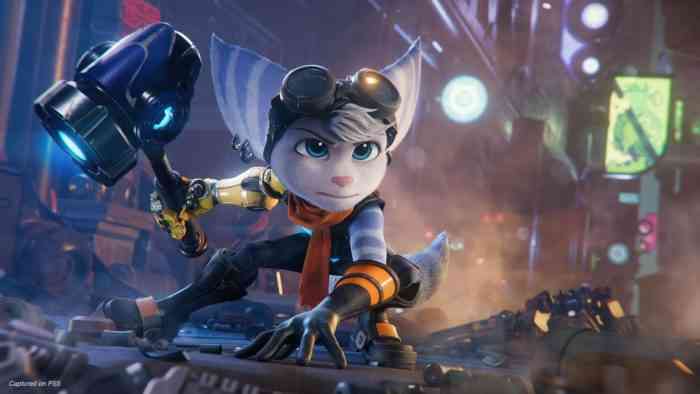 Dr. Nefarious is back with Ratchet and Clank: Rift Apart, and this time he’s equipped with the dangerous Dimensionator, which allows him to open portals to other dimensions. This forces Ratchet and Clank to go dimension-hopping to thwart his latest evil plan. Ratchet has an all-new arsenal of weapons to defeat both new and returning enemies with, such as the Burst Pistol, Topiary Sprinkler, Shatterbomb, and the Enforcer.

“What you won’t be able to experience by just watching the video of the demo is the amazing DualSense wireless controller and 3D audio,” said creative director at Insomniac Games, Marcus Smith. “Thanks to the haptic feedback and adaptive triggers on the DualSense wireless controller, we are able to make each weapon in Ratchet’s out-of-this-world arsenal feel unique and more powerful than ever.”

“The Enforcer for example,” continued Marcus Smith. “This double-barrel shotgun has multiple fire modes. Pull the trigger halfway and it fires a single shot. Squeeze passed the first stage and you will unload a double-barrel blast instead! And with the 3D audio, you will be fully immersed.”

Are you excited to play Ratchet and Clank: Rift Apart on day one when the PS5 releases? Let us know in the comments below!

Deep Rock Galactic Gets Some Sweet DualSense Features on PS5
Next
Unknown 9: Awakening is Just One Part of the Story
Previous
Fall Guys Is the Most Downloaded PS Plus Title