Optimized for Series X Is a Sign of Next-Gen

Xbox has officially revealed a sign of next-gen quality known as the ‘optimized for Series X’ badge. The badge will be part of trailers and packaging of cross-generational releases of the future such as Call of the Sea, Assassin’s Creed Valhalla and DiRT 5. The badge will let gamers know which games are also on the Series X when it releases and promises an increased quality when jumping to that version of the title. The Xbox Series X will be releasing during the holiday 2020 window and Xbox Game Pass will be bringing several titles to the next-gen console for subscribers to make the jump more easily. 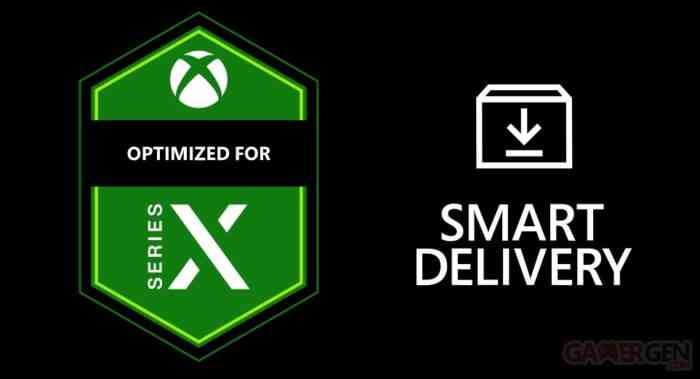 The official Xbox Twitter account recently showed off the ‘optimized for Series X’ badge, claiming “spoilers, you’re going to see this badge a lot. You ready? We’re ready.” Every game that was on the recent Inside Xbox Series X games showcase featured the new badge but we can apparently expect to see it in many more trailers and on more display packaging heading into next-gen. Some of the games featuring the badge will offer crisper visuals, better frame rates and/or faster load times, but they will all offer something that the Xbox One can’t.

Many of the Xbox One games that fans purchase will offer Smart Delivery, giving gamers a free copy of the game for the Xbox Series X. This feature will help Xbox fans more easily upgrade to the next-gen console and offers them incentive to continue purchasing games for the Xbox One going into the holiday 2020 release window. Smart Delivery will have its own badge akin to the ‘optimized for Series X’ badge so that gamers can easily identify which games to prioritize with their purchasing.

Will you be waiting for next-gen for games that include the ‘optimized for Series X’ badge or does Smart Delivery encourage you to keep buying Xbox One titles? Let us know in the comments below!