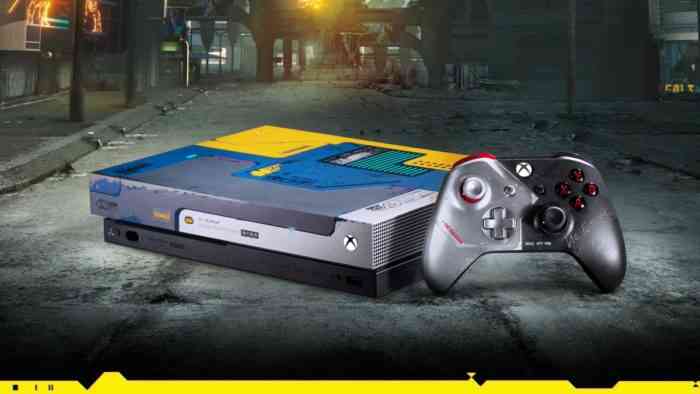 “We had the concept of all these panels coming together from different pieces of equipment to create a kitsch style console. One of the first things we had to do is figure out how to define these panels exactly,” said Xbox Design Director Monique Chatterjee. “You can see the laser etch marks in this piece really clearly. We ended up putting a piece of mylar over the product and laser etching through the mylar which allows us to go back and paint inside the etch marks.”

“There’s a lot of small detailing in the texture,” continued Monique Chatterjee. While it was hard for Microsoft and CD Projekt Red to decide on one design, they finally picked the blue and yellow version. CD Projekt Red were enthusiastic about the chrome and bright colours used on the limited edition Xbox One X bundle and impressed by the contrast of the kitsch design. The laser etchings invoke memories of the world of Cyberpunk, with futuristic corporations using similar etchings in their designs. Even the HDMI cable that’s included with the Xbox One X bundle is themed around Cyberpunk 2077, extending the colour scheme of the unit into the TV.

Will you be getting the Cyberpunk 2077 limited edition Xbox One X bundle? Let us know in the comments below!