Activision Pulls out the Big Guns

Activision is going to war. After a slew of Modern Warfare leaks leading up to Season 2, the publisher is going after the leakers. The loading screen for the game’s battle royale mode was leaked, the content for Season 2 was leaked (by Activision), the release trailer for Season 2 was leaked, and then the trailer for the Modern Warfare Warzone gametype was leaked. These were mostly leaked onto Reddit and that is where Activision is focusing its legal-laser. They have subpoenaed Reddit for information on the leaker who has allegedly posted the title card of Warzone. 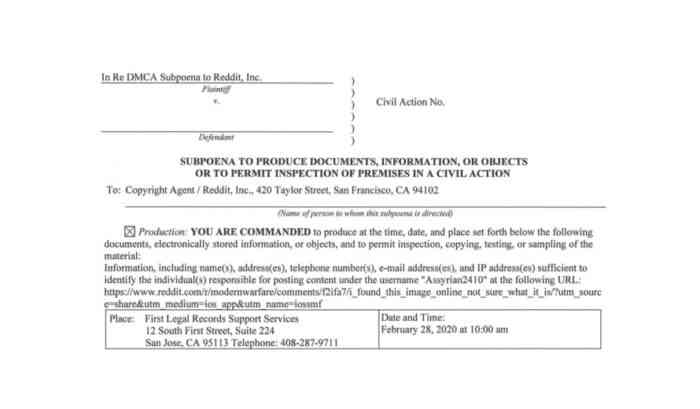 So, unless you work at the White House, subpoenas are not really something you can ignore. You can fight them, but not outright dismiss them. The subpoena above (obtained by TorrentFreak), shows that Reddit has been court-ordered to release documents and other materials that reveal the identity of the Reddit user “Assyrian2410”. The account has been deleted for at least of few days, but boy howdy, is Assy in trouble. While Reddit may be obligated to comply, it is unclear just how much information it has on an account that has been deleted. It also might be troubling to users if Reddit gives up user information too easily.

A word from the wise: if you have sensitive information of an upcoming game, ya’ll just sit on it and stay out of trouble. While Activision certainly has enough reason to go after individuals for leaking their game, pretty much everyone has known about Warzone since even before Modern Warfare came out. I mean, it’s a battle royale. Call of Duty: Modern Warfare is out on PC, PS4, and Xbox One.

Do you think Reddit should have to turn over Assyrian2410? Let us know in the comments below.