Activision Is One Step Behind

Lately, the internet is getting one over on Activision in the game of First! A couple of days ago, Activision accidentally leaked some of the Modern Warfare Season 2 content. The leak was quickly taken down, but not before fans got a look at the return of the Modern Warfare 2 character Ghost. Ghost has a different look than he did in his previous appearances, and fans are divided on whether the new look is good or not. Now, a trailer for Modern Warfare Season 2 has been released, but not before it was leaked online. 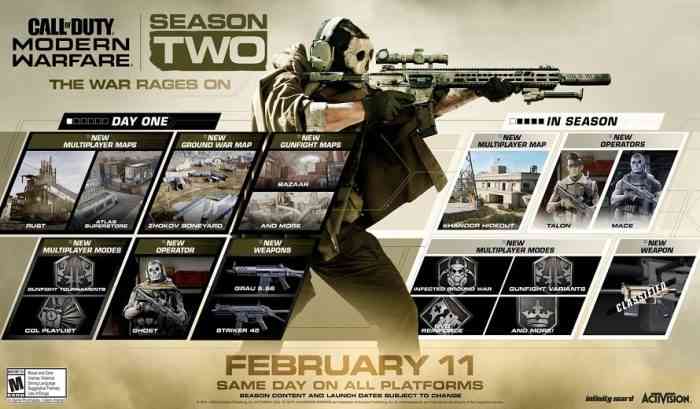 Just a couple of hours after the trailer leaked, Activision released it officially. In the trailer, we get an even better look at Ghost, whether you like this look or not. Some cinematics show Ghost in various locations, talking to Captain Price by radio. He requests “fighters [he] can trust.” Judging by the roadmap, he is probably talking about the other operators coming later in the season called Talon and Mace, but it would be cool to get older operators like Roach or Frost in later seasons. The trailer then shows off firefights from four new maps.

We all knew Rust would be making a return, and the trailer confirms it. A new map called Atlas Superstore will also be introduced. These two maps are for game types like Team Deathmatch. Gunfight gets a new map called Bazaar and Ground War gets a new map called Zhokov Boneyard. The roadmap also shows that another map called Khandor Hideout will be released later in the season along with new multiplayer modes. Season 2 begins tomorrow. Call of Duty: Modern Warfare is available on PC, PS4, and Xbox One.

What about Season 2 are you most looking forward to? Let us know in the comments below.