The Teslasuit Glove is a Virtual Reality powered glove that aims to help gamers not only see and hear VR experiences, but touch them as well. It can be used together with a VR suit as a set or separately and it detects the movements of the wearer’s hands and use those to control the accuracy of movements. The exoskeleton element combines with the motion capture and force feedback systems to mostly be used for robotic tele-control systems as well as medical rehabilitation. The newest version of the Teslasuit Glove will be showcased at CES2020 in Las Vegas from January 7th to January 10th for curious VR enthusiasts but the company hasn’t specified which VR units are compatible with the glove. 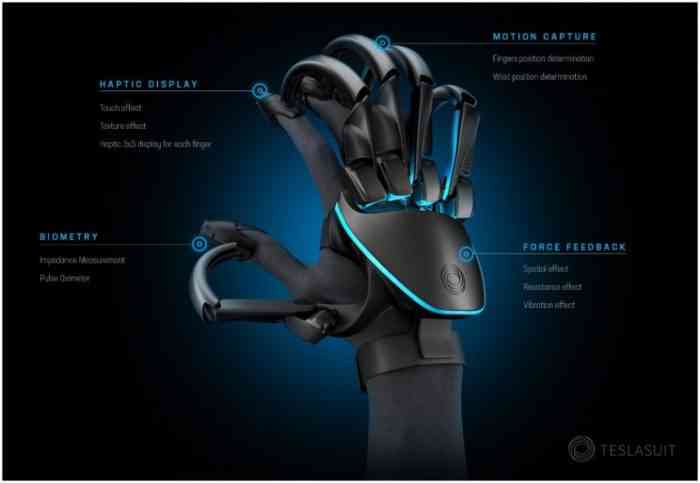 Despite the strange appearance of the Teslasuit Glove, it’s a fully wireless device that connects to others such as the full Teslasuit through Wifi. The Virtual Reality glove integrates haptics, motion capture, biometry and force feedback to help gamers experience touch in VR environments. Each finger is equipped with a 3×3 display which contributes to the tactile sensation and enables users to feel virtual textures naturally as if they existed in the same physical world. The Teslasuit Glove can detect the movements of the wearer’s hands and use that information to control the accuracy of movements in the VR experiences. Virtual Reality enthusiasts will surely want to get a hold of this innovative new advancement in VR technology.

Not only are the hands of Teslasuit Glove wearer’s tracked in the VR experience for accuracy of movements, their emotional state, stress level, and heart rate are also relayed to the device. This attention to detail will likely make experiences like Resident Evil 7 even more interesting than they already are and may add even more to the already chaotic Job Simulator. While the glove is not specifically designed for gaming, we can definitely see how feeling VR experiences will appeal to gamers and look forward to seeing what games utilize the heart rate and stress level information.

Will you be getting a Teslasuit Glove or are you still waiting for VR to become more affordable? What Virtual Reality game would you like to be able to feel? Let us know in the comments below!