Developers at Epic Games are ringing in the New Year with a little in-game celebration, complete with fireworks. At the top of every hour today, gamers will be greeted by a giant disco ball which will appear above the island, similar to the ball drop in Times Square. Once the ball drops, music will play, fireworks will explode and players will have nothing to do but dance the night away. This event will continue every hour until every country in the world has their own New Year’s celebration. Fortnite is free on basically anything you can think of so there’s no excuse not to check this event out since it only happens once a year. 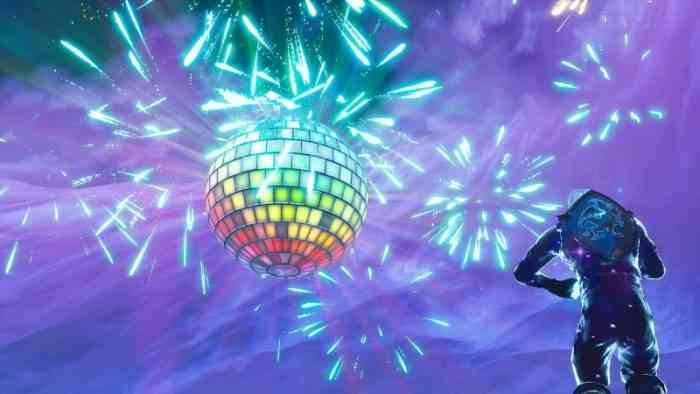 There’s no shame in celebrating the new year in your favorite game if you have nothing else planned for the end of 2019. We’ve definitely been guilty of celebrating New Year’s some years inside at our computers and if that’s what you want to do, Epic Games is one of several developers making sure everyone gets in the holiday spirit. World of Warcraft is known for having fireworks in-game every year to celebrate the eclipse of one year into the next and Mario Kart Tour has added a New Year’s Tour to celebrate. We’re sure that no matter where you are, there’s a game that will help you ring in the New Year doing what you enjoy most.

Among the events in Fortnite this year include a Star Wars celebration with Geoff Keighley and J.J. Abrams, a Borderlands 3 crossover called Fortnite X Mayhem which included the familiar bandits of the Gearbox franchise and a Stranger Things event. The Fortnite World Cup brought in competitive gamers from all over the world and it’s where 16-year-old Kyle “Bugha” Giersdorf won a whopping $3 million. One of the most interesting Fortnite events in 2019 included the black hole which absorbed everything in the game for forty hours to create a new experience known as Fortnite Chapter 2.

What was your favorite Fortnite event in 2019? Will you be ringing in the New Year in-game? Let us know in the comments below!

Lady Gaga May Host Fortnite’s Next Virtual Concert, Sources Say
Next
Author of The Witcher Pokes Fun at Game of Thrones
Previous
Yooka-Laylee and the Impossible Lair Is the Last Giveaway of the Decade in the Epic Games Store