The Final Fantasy series is coming to Xbox and PC Game Pass with nine mainline games coming to the platform including the legendary FF VII that’s currently getting remade and the linear but beautiful FF XIII. The list of Final Fantasy games unveiled at XO19 includes every main installment released in the series since 1997, including a few spin-off titles. These titles will be available during the holidays and into early 2020 and Phil Spencer even mentioned after the reveal at XO19 that he’d like to bring the MMO Final Fantasy 14 to Game Pass in the future. 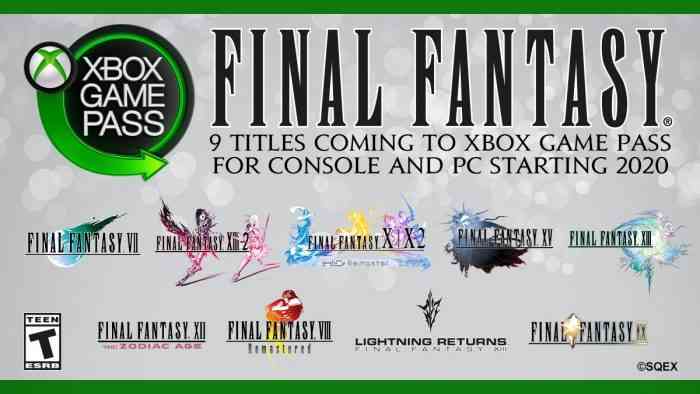 The following Final Fantasy games were confirmed during XO19 to be coming to Game Pass Ultimate soon:

The most notable titles missing from this list are Final Fantasy XI and XIV but with Phil Spencer already bringing up FF 14, it’s likely XI will be the only mainline title not coming to Game Pass eventually. We’re looking forward to hundreds of hours of Final Fantasy gameplay to sink our teeth into joining the already impressive Game Pass library. These ten Final Fantasy titles join over fifty new games Xbox announced for the Game Pass service as part of XO19, proving it’s the game streaming service to subscribe to even with Google Stadia releasing later in the month.

When Microsoft’s gaming chief, Phil Spencer was asked about Final Fantasy XIV, he said “I wanted you to know, rest assured that we will be bringing that game to Xbox. We have a great relationship with Yoshida-san and we’re working through what it means to bring Xbox the cross-platform MMO that they’ve run for years.”

Which Final Fantasy title will be the first one you boot up on Game Pass? What was your favorite announcement from XO19? Let us know in the comments below!