With October upon us and Halloween around the corner, Psyonix is adding the Stranger Things inspired Haunted Hallows event. The primary feature in the trailer they dropped is the Upside Down version of the Farmstead Arena which is just like something you’d see in the Netflix original program. Like most Rocket League events, Haunted Hallows includes several new cosmetic “autumn themed” items to grind towards such as toppers, new wheels, etc. Haunted Hallows is releasing for Xbox One, PS4, Switch and PC on October 15th and the event lasts until November 11th. 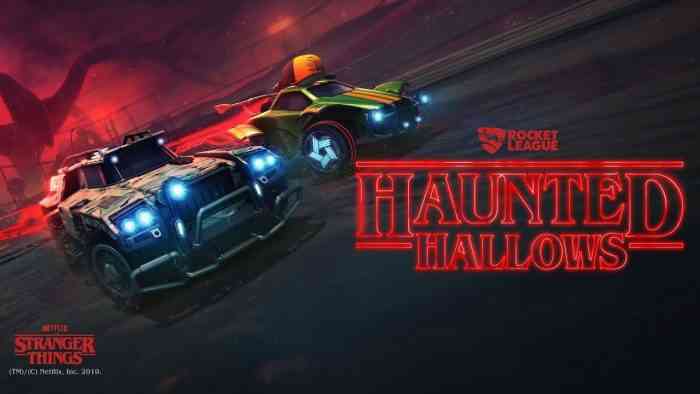 The Mind Flayer has taken over the Farmstead map which apparently takes control of your car but if gamers are successful in evading it, they’ll earn a Candy Corn currency which can be spent on the new cosmetic autumn themed items. Hawkins National Laboratory will also flare up your Battle-Car creations. This new version of Farmstead brings new meaning to the term team player as gamers will need to help each other evade the Mind Flayer.

Partying up with people is becoming easier with the Haunted Hallows update as following a match, gamers can just select to “Party-Up” right from the post-game menu. Psyonix intends to bring players together more with this new feature, keeping people who enjoy playing together in the same group. “Quickplay” will now automatically search for a match in the last playlist players joined. For new players, “Quickplay” is defaulted to 3v3.

The October Update brings coloured Boost Meters will help gamers distinguish which team they’re playing for beyond their painted Battle-Car, decals and neon. The Boost Meter itself will remain the same but the meter’s background will be blue or orange depending on which team you’re on. Colorblind Mode options will automatically apply to the Boost Meter for anyone who opted to utilize that feature.

Do you prefer a new map or new cosmetics? What’s your favorite Halloween themed event in a game? Let us know in the comments below!