On Your Mark, Get Set, Ghost!

Something the original Crash Team Racing didn’t have was Limited Time Events. That’s one of the beautiful things about the remake; the continued support and updates. The latest event is Crash Team Racing’s Spooky Grand Prix which lasts most of the month of Halloween. Let’s be honest, Halloween is the only thing going on in October besides Canadian Thanksgiving. If you’re a hardcore CTR fan, you might not even have time for Thanksgiving. There are a lot of rewards to claim in this event. 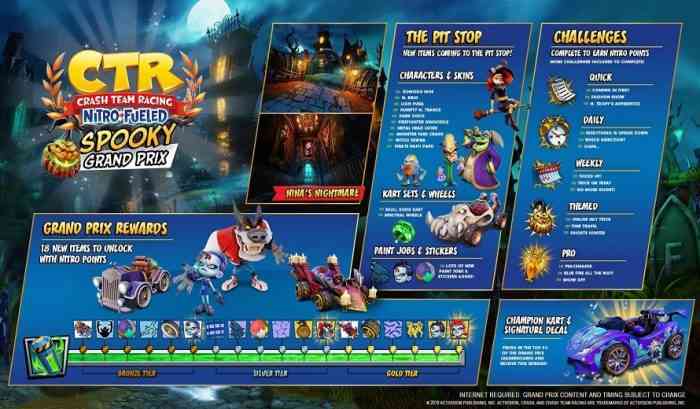 A couple of days ago, a trailer for the event was released. It hints at additional characters and a new map. An image from Activision lays out all that the Spooky Grand Prix has to offer and it looks like a lot. The characters players can get are the returning faces of Nina Cortex, Dr. N. Brio, and Komodo Moe. On top of that, there are additional skins for some of the classic racers, kart parts, and stickers and paint jobs. Some of these appear to be unlockable through the Pit Stop and some through earning them in races. New challenges for more Nitro Points will be available as well. There is even a Top 5% Leaderboard reward.

The Spooky Grand Prix event will be lasting from today (October 4th) until November 3rd. You can check out all the details on Activision’s site.

Are you getting back to the races? Let us know in the comments below.