Why didn’t we think of this before? For Honor brings together the most iconic types of warriors from history like samurai and knights. It only seems appropriate that Ubisoft brings in Yacht Club Games’ Shovel Knight. Well, it’s as appropriate as a shovel-wielding knight can be in the first place. The crossover is as silly as it is cool. On one hand, you have a new emote that has your hero hopping on a shovel like a pogo stick. On the other hand, new outfits inspired by Shovel Knight characters look surprisingly nice on these killing machines. 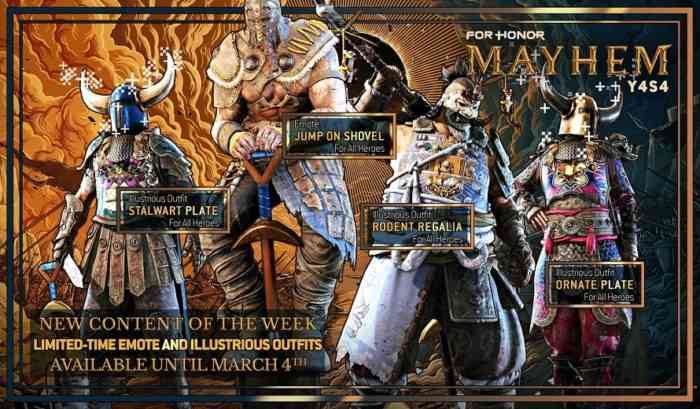 The trailer has Viking raider pulling an 8-bit shovel out of the ground and doing the new emote. We also see the new outfits in action. The Salwart Plate, which is Shovel Knight’s default armor, puts your champion in the classic blue helmet. The Ornate Plate is also an option to wear, allowing your champion to wear a golden helmet. The third outfit is the Rodent Regalia. When King Knight wears this armor and falls into a deadly trap, he is hoisted out by Propeller Rats. Wear this in For Honor and you will be accompanied into battle with these companions as well. Fighting with these special outfits will also be accented with 8-bit effects for kills and strikes.

This special Shovel Knight event will run until March 4th, so fans of Shovel Knight will want to pick these up right away. For Honor is free to play on PC, PS4, and Xbox One.

Will you take part in this limited time event? Let us know in the comments below.

Skull and Bones Re-Reveal Date Has Been Leaked
Next
Resident Evil: Everybody Loves Wesker
Previous
Bring Previous Locations From Steam to Hitman 3 on Epic Games Store