Infinity Ward detailed when fans of Call of Duty can expect to see the upcoming Modern Warfare campaign and spec ops prior to its release in a roadmap to launch. While the campaign will finally be showed off at the end of September, we’ll get a better idea of the feature replacing zombies for this installment, Spec Ops. The roadmap also tells us that the first open beta will go from September 12th-6th and the second open beta will range between September 19th-23rd with details about cross-play in between. Modern Warfare releases on PS4, Xbox One and PC on October 25th. 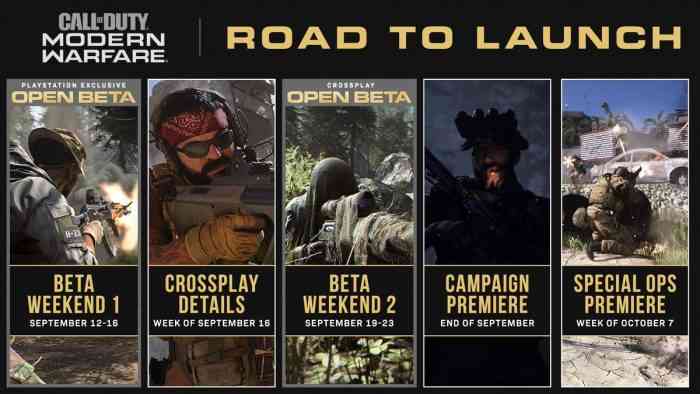 Infinity Ward took to Twitter to publicly share the information with the Call of Duty fans who are anticipating the release of the freshly rebooted series and the rebuilt lighting and physics engines. The details in September are likely to keep Call of Duty fans hyped through the entire month leading into the release of Modern Warfare. The roadmmap to launch continues a theme of transparency that Infinity Ward has maintained through development and will hopefully continue after the game releases.

Traditionally, gamers have had to survive waves of increasingly difficult AI soldiers in Spec Ops which is similar to Gears of War horde mode or Halo Firefight. The new campaign has been inspired by real veterans of war and Modern Warfare is being taken more seriously than other Call of Duty installments as a result. The length of the campaign will be roughly in line with other Modern Warfare games and will feature familiar mature themes.

Are you more excited to learn more about the Modern Warfare campaign or how Infinity Ward changed Spec Ops this time around? Are you taking part in the open beta during either week? Let us know in the comments below!