Every episode of 11/22/63 has excelled in casting actors who step in to the storyline and mesmerize you with their performance. This time it is T. R. Knight who has the spotlight shone on him with his return as Sadie’s ex-husband, John Clayton. His appearance also marks the moment when things get real and some of those marks will never leave like what he did to Sadie’s face.

At the conclusion of last week’s episode, Sadie was invisibly herded by a shadowy figure down into Jake’s basement where she found some of Jake’s surveillance tapes of the Oswalds. As mentioned in my episode four review, the profile of the unseen shepherd bore a strong resemblance to John Clayton but it also could have been the Obdurate Past manipulating events via the Yellow Ticket Man. Based on the events of this episode, I am more inclined to go with the latter theory. For one thing, how would Clayton know about the tapes or understand their significance?

The timing of this discord between Sadie and Jake comes at a critical juncture. The attempted assassination of General Walker is drawing near. If Jake can confirm that Oswald was the one to take the shot – and reinforced by Al in a flashback – Jake believes that is all the proof he needs. Confirmation of Oswald’s involvement in the Walker incident is certainly damning but hardly conclusive. Bill Turcotte points this out to a distraught Jake, who is heart broken with his break up of Sadie, and just wants to get the whole thing over with.

The Past has more tricks up its sleeve not just for Jake but for Bill too. Clayton may have it played it cool in his previous encounter with Jake but Sadie’s confession of the cause of their marital strife pushes the unstable Clayton over the edge. He invades Sadie’s home and takes her prisoner. Then he calls Jake, who is cleaning out his home with the full intention of breaking ties with Sadie and leaving Jodie, Texas behind forever. Clayton orders Jake to come to Sadie’s house or he will kill her. Jake loses it and runs to Sadie’s place where he and the audience are presented with a horrific scene.

At the dining room table, Sadie is tied to a chair, her head covered by a pillow case of which one side is soaked in blood. Blood that is coming from somewhere on Sadie’s face. Clayton orders Jake at gunpoint to have a seat and then he unveils his work. A ploughed furrow runs on the right side of Sadie’s face joining hair and jawline with a very, very deep cut. Clayton’s revenge is not complete. He orders Jake to drink a glass of the bleach that Clayton sells or else he will shoot Jake. During this sequence Knight really chews up the scenery sparking memories of Heath Ledger’s indelible performance as The Joker. 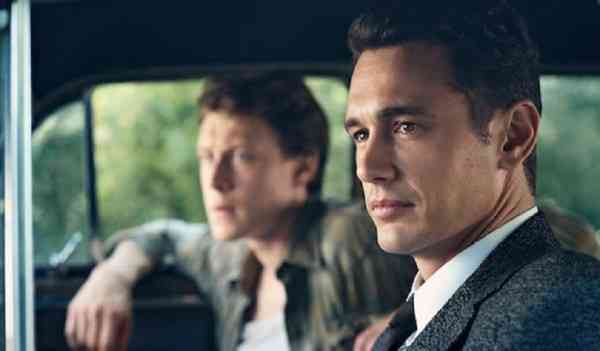 In the ensuing struggle, Clayton is killed by Jake and Sadie and she is rushed to a Dallas hospital. From the book we know the attack on Sadie is part of history. Now the Past has used it to derail Jake from his purpose of tailing Oswald to see if he took the Walker shot. Jake hopes that Bill has carried out the mission but learns that the Obdurate Past handled Bill too by drawing him away from Walker’s house. The Past fooled Turcotte into seeing her long lost, and presumably, dead sister. The Walker mission is a total bust leaving Jake in the same situation as before – in the dark about Oswald’s actions. It is at this moment that Jake realizes that he needs all the help he can get to save John F. Kennedy.

From start to go, this was an episode that stuck the pedal to the metal. There were a few quiet moments with Bill Turcotte and Marina Oswald sharing a smoke break but even that was fraught with tension because of the very danger that Oswald would find them together. Which he did.

11/22/63 has not shied away from graphic violence and the damage done to Sadie’s face, while not as visceral as that in the book, goes as far as viewers could possibly stomach. The blood soaked pillow case was a well orchestrated visual cue to let viewers imaginations run wild. Strong performances from all the cast members really sell the drama with special kudos going to T. R. Knight and Sarah Gadon. Jake is going to have to follow this string out to its very end now. All the way back to the Dealey Plaza and the sixth floor of the Dallas Book Repository to stop Oswald, or whomever, from killing the President.

That is, if the Obdurate Past does not prevent him from doing so.

Lou Sytsma will review each week’s episode of 11/22/63, so stay tuned right here. Be sure to also check out our recent reviews of The X-Files, The Flash and Arrow!