This week on The Flash, a pretty recognizable villain makes his return as Barry, Cisco and the team continue to battle with the fallout from their trip to Earth 2.

We open up right where we left off as Jay is killed by Zoom and pulled through the final breach before it closes. Caitlyn is a wreck and Jessie is having to deal with never returning home. Wells tells Barry and Cisco that they can never talk about Earth 2 for fear that could influence their own Earth. So they don’t and they try to continue their lives as if nothing happened. Meanwhile, Lyla as the new head of ARGUS, is taking stock of all the organizations assets. With Diggle in tow, they come to check out King Shark who is being held in a top secret facility. But as luck would have it, just when they get there, the giant man-shark makes his escape and heads straight for Central City and his target – The Flash.

With all the breaches sealed for good, Barry and the team have had to move on from Jay’s death and from dooming Earth 2 to Zooms control. Barry has become quite distant from Joe and Iris and his relationship with Wally is bordering on hostile which is beginning to be a cause of concern. Meanwhile, Cisco is becoming concerned about Caitlyn who has thrown herself into her work after Jay’s death, but Cisco fears she may becoming more like her Killer Frost doppelganger with each passing day. Lyla and Diggle show up to warn Barry that King Shark is hot on his tail, hell bent on carrying out Zoom’s wishes and killing Flash.

Barry teams up with Lyla and ARGUS to take down King Shark while Caitlyn and Cisco look into the Earth 1 counterpart of Shark and Wells tries to track the behemoth down. Joe encourages Barry to meet with Wally to help him with an engineering project which Barry reluctantly agrees to.  Caitlyn manages to worry Cisco further with her actions while Barry’s meeting with Wally goes disastrously as Wally’s dislike for Barry comes out in full force. Barry tries to make peace, but things are noticeably strained. Cisco accidentally lets slip to Caitlyn about Earth 2 and spills his concerns to her while Wells finally has to let his guard down and gets Jessie to help him figure out how to track down Shark. 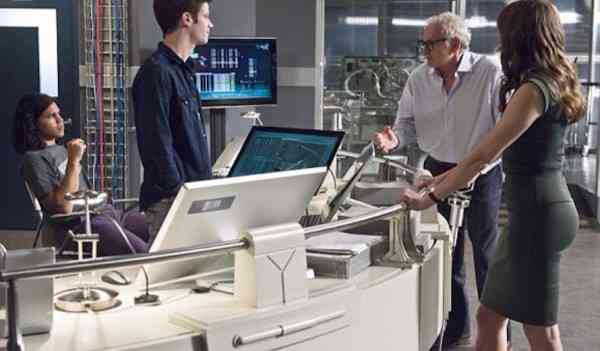 Wally and Barry butt heads but as Wally goes to storm off, Shark shows up and tears the house apart looking for Flash having tracked him by scent. Barry manages to sneak away and Flash tries to take Shark out to no avail. Having learned that the breaches are closed, Shark runs when ARGUS agents show up. Wally think that Barry was hiding the whole time Shark was there and he doesn’t attempt to hide his disdain for him. As he leaves, Barry breaks down and tells Joe and Iris about Earth 2 and how he carries the guilt of everything that’s happened in all of their lives since he chose not to stop the murder of his mother last year.

All the science members of the team do their ‘pseudo science’ thing and convincingly come up with a plan to trap King Shark. They set the trap and, eventually, the man eater shows up to kill the Speedster. Flash eventually leads him out to sea where Shark is in his element. Creating an electric whirlpool, Flash tosses lightning, shocking the massive shark into unconsciousness and stopping the threat. ARGUS carts King Shark off, Diggle and Lyla say their goodbyes but not before Diggle gives Flash a profound speech about using his guilt as a driving force and not let it be a weight around his neck and Joe gives Wally a speech about he and Barry being equally loved. 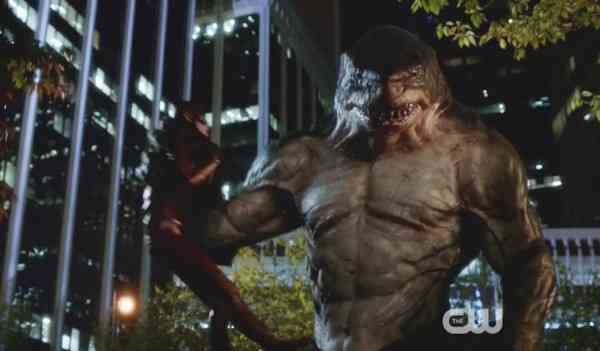 Barry calls everyone together to give Jay a bit of a send off and to put Diggle’s words to use. He promises to get back to Earth 2 and to stop Zoom, once and for all. Which takes us into the stinger as Zoom returns to his lair with Jay’s body. Zoom removes his mask, pondering about the problem that Jay was still alive presents and we finally see who is under that mask. None other than Jay Garrick himself!

So, all the speculation, theorizing and fans digging every minute reference out of every episode turned out to be all true. Jay Garrick is Zoom. Or, at least, some version of Jay Garrick is Zoom. The MF Doom masked man seems to indicate that, as I said last week, Garrick is probably on a serious ‘The One’ kick and is moving between worlds, collecting Speed Force from speedsters. This obviously has a lot of personal weight for our heroes as this reveal is going to be a huge blow to the team. Especially since it’s probably safe to assume that Zoom is going to pretend to be the good Jay in order to get close to Barry. It also makes for what will probably be a pretty weighty showdown as Barry is inevitably going to be tested both in physical and emotional strength as he’ll need to fight and defeat a doppelganger of a good friend. 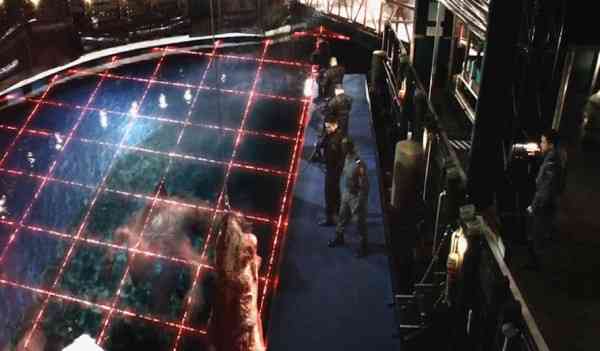 This episode of The Flash as a whole was a pretty good character episode as the fallout from the Earth 2 visit had a lot of resonance across all the storylines. Grant Gustin got some good emotional fodder to work with while everyone else grappled with their own issues from crossing between worlds. On the other hand, King Shark is a terrific example of why The Flash should really understand its budgetary constraints. I don’t want to completely dump on the show because at least it was brave enough to do attempt this kind of episode for their fan base, but the CGI was pretty awful and since there was a lot of it, a lot of the episode looked pretty rough. So, hopefully lessons learned and we can just try to avoid overly expensive character in the future.

Quick aside though; the writers of The Flash really have to get it together and give Danielle Panabaker something to do. They have given her nothing but pouting and mourning to do the entire damn season. They owe the Caitlyn character a whole bunch of character development and storylines to make up for literal weeks of leaving one of their finest characters sitting on the sidelines, collecting dust.

So, The Flash continues to distance itself from the plummeting quality of its sister shows and even in its stand alone episodes, still manages to make some pretty compelling TV. I’m really looking forward to the final few weeks as the Zoom storyline comes to its conclusion and all that is bound to come along with it!

Doug Mercer reviews The Flash each week – so stay tuned here for more! Also, check out our recent reviews of The X-Files, Arrow and Legends of Tomorrow!