Matterfall Review – 2017, When Housemarque Makes a Better Metroid Game than Nintendo Does

A strong, confident warrior dons her power suit. With an energy blaster augmented to her arm and the silent confidence of countless victories, she is humanity’s salvation against the invading alien hordes. It might sound familiar, but it probably isn’t who you’re thinking. Charge up your power suit and get to work in Matterfall, the stellar new title from indie developer Housemarque. Matterfall is a side-scrolling shooter that borrows the right elements from a few different genres and pieces them together for a thrilling experience. You might remember Housemarque from their other high-octane shooters Nex Machina and Alienation which we scored at 90 and 81 respectively, so they definitely know what they’re doing.

Players will be familiar with traversing tight corners and trick jumps, unlocking powers, and taking on horrific alien enemies along the way. In fact, anyone who misses the glory days of Metroid should really give Matterfall a closer look. Housemarque keeps the twin-stick shooter controls and it works smoothly, with one stick running and the other firing at full speed with unlimited ammo and no reloading. The range on the gun is excellent, as some side-scrollers tend to be limiting, whereas Matterfall lets you keep your distance but still forces you to press on.

The game jumps right into the action without giving you the backstory: Smart Matter, an alien resource that has infected the planet, is slowly taking over. Red Matter is harmful and generates enemies. Blue Matter, however, can be manipulated by our hero – Avalon Darrow – with the Matter Jet attached to her power suit. It’s a simple mechanic to add to the side-scrolling genre but it works fantastically; certain objects, explosives, and platforms can be altered with the Matter Jet to detonate or create solid barriers which Avalon is able to dash and attack through, but enemies cannot penetrate. This is not only effective for reaching higher areas but taking a breather under some much-needed cover.

“Anyone who misses the glory days of Metroid should really give Matterfall a closer look.”

Matterfall also does a great job of keeping the stages fresh, offering moments of exploration, bullet hell, and zero-G combat that blends together perfectly with the matter-manipulation aspect. Each stage has a number of hidden civilians to rescue with specific ones offering you augmentations that can be switched into your load-out at any time. This consists of four weapons and eight passive enhancements that need to be slotted into three available points. These abilities can have far reaching effects, so it’s good to give each of them a try and find out what works best for you. I personally enjoy the increased probability of matter bombs appearing as they tend to destroy every enemy on screen in a pinch.

Sadly, Matterfall consists only of three stages with four levels per stage, the final level in each being a boss battle. As you progress in the game the checkpoints are further and further apart, so it can be challenging if you tend to die frequently but after playing so much of Matterfall I was disappointed to see how short it really was. That being said, the variety in their boss and mini-boss battles kept the game flowing at a smooth pace and I never really found myself feeling a lull in the action; there was always a new path to explore or a horde of enemies spawning overhead that needed to be obliterated. 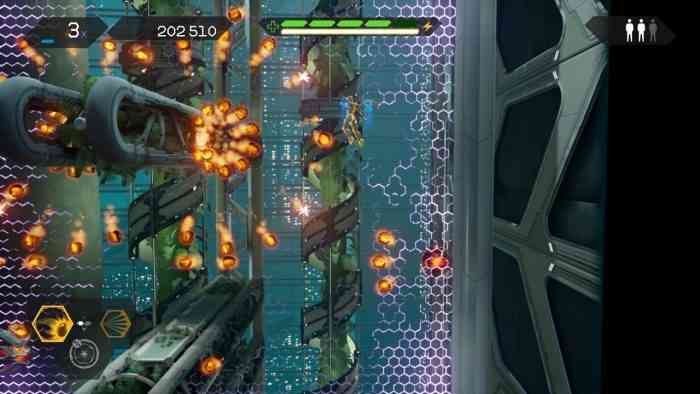 Housemarque admits they went a different route with their control scheme which, at first, feels a bit off. Jumping is swapped to R1, but once you get the hang of it you’ll find it greatly improves your survivability with midair combat and fine-aiming. The complex combos Avalon can execute will have you frequently using almost every button on the controller in quick succession without a second thought, and it’s pretty satisfying to feel that level of mastery. While we learn very little about Avalon herself, you get that same sense of confident badassery instilled by playing as Samus Aran.

Every fine detail of the game has been meticulously handled by Housemarque: the music and sound effects offer that perfect new and retro arcade blend, the remains of Avalon’s enemies can be kicked around as she runs through them, and when using her Strike ability, Avalon leaves behind a ghostly figure of herself that looks simply stunning.

Matterfall is an absolute gem to play, taking gameplay we know and love and adding just the right nuances to give us something great. With stellar graphics and retro-inspired music, the only real downside comes in how small the game really is: Twelve stages is barely enough to sink our teeth into, let along get a real taste for what this story should be. Matterfall could also use some visual customization options, but for what Housemarque has delivered this is a stellar game that truly deserves your attention. 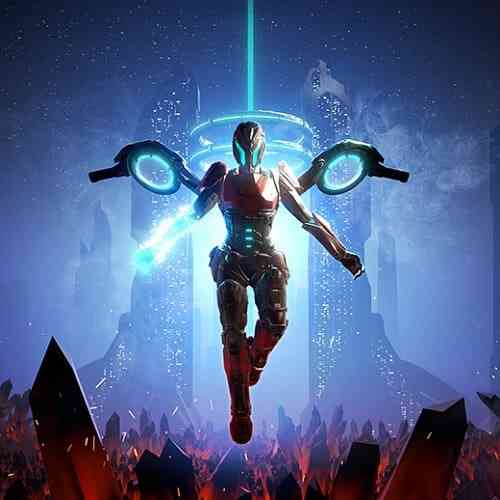 God of War: Ragnarok Dev on DLC, ‘I Would Not Count on It’
Next Original Journey Review – Far From Original
Previous Crashday: Redline Edition Review – A New Coat of Paint Isn’t the Tune-Up This Game Needed