It’s safe to say that the developers at Housemarque love making twin-stick shooters. Between Super Stardust, Alienation, and Resogun, it’s hard not see them as the top dogs in their niche, crafting and iterating upon genre masterpieces that actually get better with age. It should come as no surprise then that their latest entry, Nex Machina is an utter delight. It surpasses their previous efforts and could very well be the pinnacle of what the genre can achieve.

Housemarque has been very open about their desire for Nex Machina to pay tribute to the work of veteran game designer Eugene Jarvis, who worked with them on the title. Jarvis is the genius behind arcade classics like Smash TV and Robotron 2048, and homages to his legacy are littered throughout the game, large and small. From the neon colors and retro “cablepunk” aesthetic to the arduous difficulty curve, the game walks a fine balance between reverential and distinctive.

Much like Jarvis’ work, Nex Machina’s fat is trimmed in places like narrative and context, putting you in the shoes of a lone hero attempting to save humanity from an ill-defined robopocalypse already in progress. Where the game does not skimp, however, is in its core design, which often feels like an elegant merger of Housemarque’s other major hits, Resogun and Super Stardust. Movement and aiming controls are tight and responsive, never going in directions you don’t intend. Like Super Stardust, you can acquire powerups that expand your weapon’s reach and spread, provide a one-use shield, and enhance your dash ability. Like Resogun, a key element is your points multiplier, which increases exponentially the more enemies you defeat. You’re also tasked with saving all the humans in each level, with each successive human giving a temporary boost to your multiplier.

“In terms of mechanics, twin-stick shooters do not get more fine-tuned than this.”

The sheer number of overlapping mechanics above could seem overwhelming to those unfamiliar with the genre, or with Housemarque’s games. The simplest thing would be to brute force your way through, ignoring any distractions and speed to the end of a world. The moment you start getting ideas about saving humans or looking for secret exits, however, the game will quickly take advantage of your shifted focus, swarming you with enemies from all directions. Eventually, though, I found a satisfying and progressively challenging chain of priorities: I would first save all the humans, maximizing my multiplier bonus, and then aim my weapon at the environment, shooting all enemies in my path as I searched for any secrets a level may have to offer. Once I was satisfied that I hadn’t missed anything, I would wipe out the remaining enemies and move on to the next level, where I would repeat the cycle. That the loop exists isn’t as impressive as the fact that I developed it by learning the game’s methodology. In terms of mechanics, twin-stick shooters do not get more fine-tuned than this. 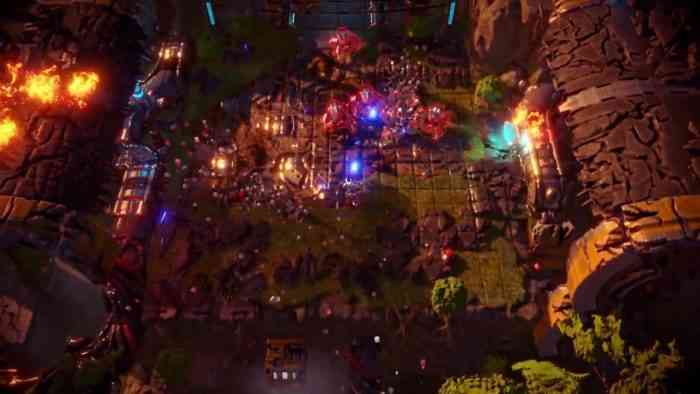 While this loop served me well, it only really worked on the game’s easiest difficulty. Don’t let the settings title, “Rookie”, fool you, though; this is by far one of the hardest games I have ever played, and that fact may be Nex Machina’s only serious sore spot. Even on Rookie, the last few worlds were a challenge that left my hands calloused and my eyes bloodshot, and the highest difficulty moves at such a fast clip that I fail to see how anyone could possibly stomach it, let alone master it. I could see the utility of that challenge in the era of coin-operated games, but in a modern setting it only comes off as prohibitive to your ability to progress. It’s an adherence to Jarvis’ influence that I could see turning some players off.

Ever since Resogun, I have been impressed by Housemarque’s use of voxels in their engine, making themselves synonymous with the technology. With Nex Machina they’ve upped their game, making each world unique and thematic, including ice caverns, fire caves, and robotics facilities, to name a few. They’ve all been filtered through the lens of “cablepunk” – a retro version of cyberpunk that uses primitive parts and exposed wiring – and appear as though they’ve been pieced together one voxel at a time. The pixelated brick walls of the levels vibrate and shake as you set off bombs or destroy parts of the environment, and every enemy you destroy pops apart in a satisfying explosion of voxels that never gets old.

“Despite its utterly insane difficulty curve, Nex Machina is a pure joy to play.”

Nex Machina’s sound design is also something that cannot be overlooked. It features an energizing high-tempo electronic score that keeps your thumbs on a rhythmic swivel, but also feel like they fit with the world you’re in. There are also a variety of audio cues the game offers, subtly warning you about humans in danger, or hinting at a something hidden when you fire at just the right spot in the environment. Again, these small details might get missed on your first few attempts, but over time they become second nature, altering your chain of priorities momentarily as you pursue them.

Despite its utterly insane difficulty curve, Nex Machina is a pure joy to play. It’s sharp, intense, responsive, and layered with overlapping systems and objectives. Eugene Jarvis’ arcade-perfect pedigree acts as the mortar that holds the game’s voxel-based worlds and perfectly polished mechanics together, and I don’t think it’s hyperbole to posit that might be the best twin-stick shooter of this console generation, regardless of what proceeds it. 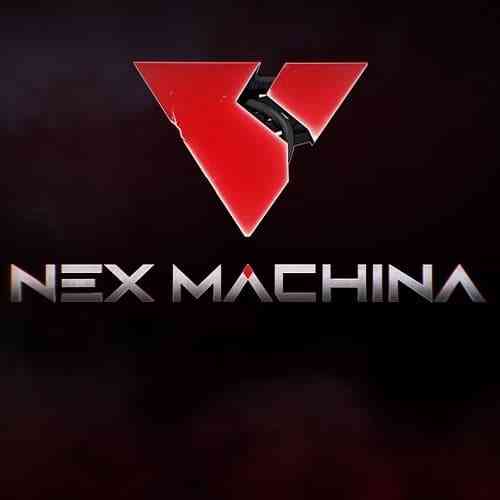