Returnal devs just revealed more details about the game’s upcoming DLC Ascension. The expansion is launching later this month. It will bring co-op mode as well as a new survival mode called Tower of Sisyphus.

As confirmed at the March 2022 State of Play live stream event, Returnal: Ascension is coming on March 22nd. With the new co-op mode, two players can battle their way through the main story together. 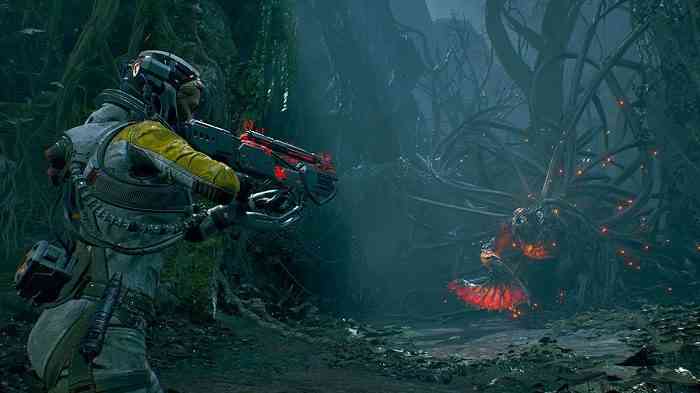 “It has been wonderful to see players continue to enjoy Returnal long after its release,” said Game Director Harry Krueger. “We have provided a few patches and updates so far but this time we wanted to provide something really special for our players, our Ascension expansion.”

Returnal is a third-person action PS5 exclusive. Devs just launched it last spring and it looks like it is getting a massive chunk of downloadable content. Players take on the role of Selene who is a woman in a time loop trap. The game received a lot of positive reviews at launch.

However, up until this point it has always been a single player experience. Returnal: Ascension is its fans’ key to being able to experience the original game with a friend. Unfortunately, the Tower of Sisyphus mode will only be playable as a single player.

“The procedurally generated biomes of Atropos offer a deep and intricate challenge,” Krueger added. “With our Ascension update we wanted to offer new content and also a new way to engage with the game where your survival skills and perseverance will be tested.”

In this new Returnal: Ascension survival mode, “players will strive to ascend the Tower as high as possible.” “Much like the tragic story of Sisyphus, there is no need to the climb,” Krueger said. “Players are tragically destined to meet their demise as the mode gets increasingly harder.”

Basically, Returnal: Ascension’s Tower of Sisyphus mode is going to be the game’s Endless mode.

Returnal is Coming to PC, and its System Requirements are Intense