XCOM: Chimera Squad is a Satisfying New Approach To a Turn Based Juggernaut

XCOM: Chimera Squad is the surprise new game in the XCOM series, announced one week before its release. It’s a very different game from XCOM and XCOM 2, but as surprises go, it’s a welcome one. XCOM is a series that never overtly focused on story or character, but in Chimera Squad, it tries something new and succeeds with its excellent writing and immersion in the overall universe. It has us over the moon for what a proper XCOM 3 will play like, and we’re excited to share our thoughts on the game with you. To watch our full video review, click play on the video below!

XCOM: Chimera Squad is a sequel, taking place after a victorious game of XCOM 2. After Earth was liberated, a lot of aliens were left behind and now they try to co-exist to form a new society. That’s where Chimera Squad comes in. They are an elite task force made up of humans, aliens, and genetically altered hybrids.

The most dramatic departure from classic XCOM is that you no longer can make soldiers from scratch. There are twelve members of Chimera Squad, and they all have predetermined looks, voices, personalities, and characters. Sure, you can change the color of their shirt. You can assign them new equipment and occasionally choose between two abilities, but this is much more like an RPG than a tactical strategy game. 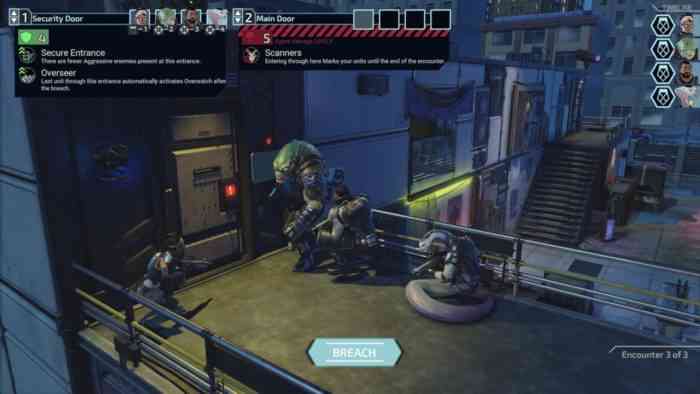 Missions in Chimera Squad feel shorter than other XCOM games, marked by transitions called breaches. Each time your squad enters a new room, you can position them at different entrances, which confer different bonuses on your guys. Maybe they’ll have increased dodge, or their first shot will stun an enemy. Maybe they won’t be able to move for a turn. A complex combination of items, abilities, bonuses, and detriments makes each Breach a series of interesting decisions. You may get trounced by a particular level, but then try restarting with one of your weakest soldiers who has a hacking ability, thus letting your team breach an otherwise locked door and reach a high ground for the encounter. Chimera Squad is incredibly well designed in this way: Your decisions really matter, and they add up.

What do you think of the new changes in XCOM: Chimera Squad? How do you think it stacks up against previous games? We’d love to hear your thoughts in the comments below, and be sure to check us out on Youtube, Facebook and Twitter for more video reviews and content like this!