SpongeBob SquarePants: Battle for Bikini Bottom – Rehydrated is the remake of a 2003 game that brings back the signature charm that the franchise has endeared audiences with for over twenty years. We were able to get our hands on the coveted F.U.N. Edition, retailing at $299.99, and it is chock-full of goodies. To watch the full unboxing of the fabulous collector’s edition, click play on the video below!

The F.U.N. Edition comes with three different whimsical figurines of Sandy, Patrick and SpongeBob, all sized between 7 and 8 inches. There is also a pair of crew length socks that resemble SpongeBob’s own, with the words “Battle For Bikini Bottom” printed across the top. One of the notable tchotchkes included in the collector’s edition is a set of five keyrings modeled as different tiki totems in five different styles and colors.

In addition to the keyrings, figurines and socks, there is also a delightful set of wallstickers with various characters and recognizable objects from SpongeBob SquarePants, and six lithographs displaying beautiful artwork from different places that are visited in the game. Last but certainly not least, the F.U.N. Edition comes with a copy of the game itself on any platform of your choosing! 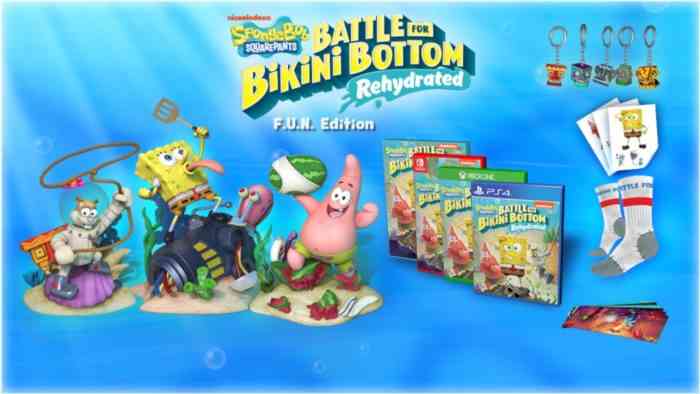 The SpongeBob SquarePants: Battle for Bikini Bottom – Rehydrated | F.U.N. Edition is available at various retailers for PC, Nintendo Switch, PS4 and Xbox One.

Did you enjoy watching our unboxing of the SpongeBob SquarePants: Battle for Bikini Bottom – Rehydrated | F.U.N. Edition? Have you played either the remake or the original? Please let us know your thoughts in the comments below, and don’t forget to subscribe to COGconnected on Youtube for more video game content like this!


Check Out What’s in Harvest Moon: One World Collector’s Edition

Get a Sweet Statue and More in the Biomutant Atomic Edition

Anima: Gate of Memories: Arcane Edition is All the Indie RPG Action You Could Ask For